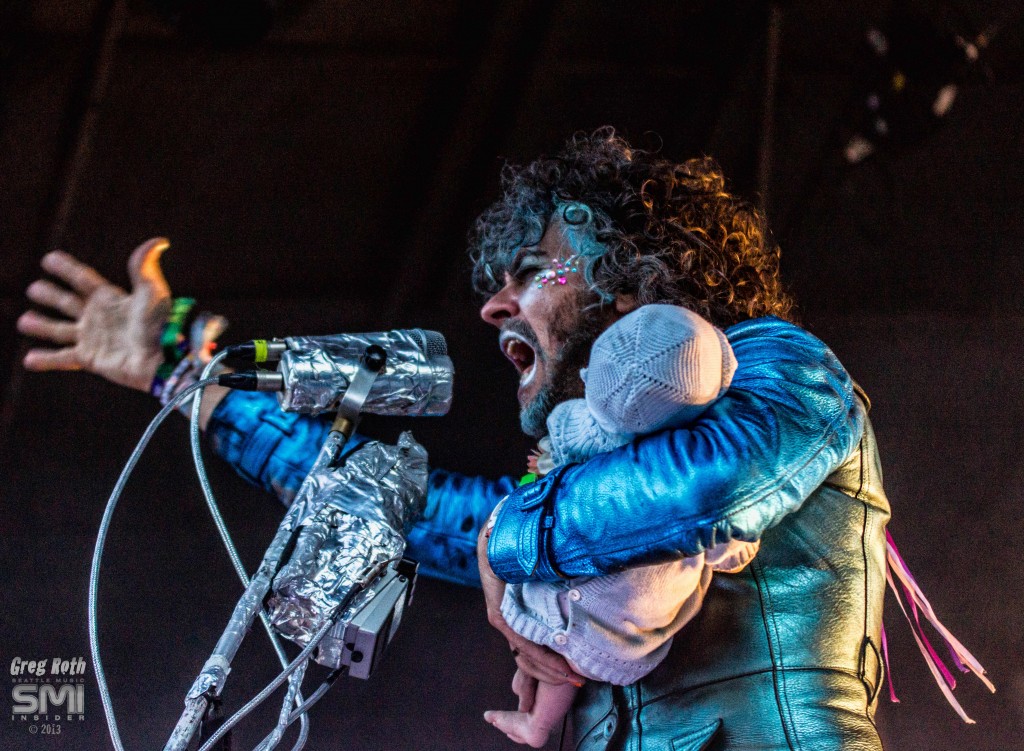 Wayne Coyne of The Flaming Lips (Photo by Greg Roth)

Let there be no doubt that Capitol Hill knows how to throw a party. Earlier in the week, Macklemore and Ryan Lewis shot a video in front of Dick’s Drive In on Broadway. (You can expect Dicks to become a global brand and the establishment on Broadway to be added to the Ride The Ducks Tour itinerary.) and a few days later Capitol Hill Block Party descended upon the Cap. Hill denizens and like past parties, this years eclectic offering did not disappoint the music loving masses.

Black confetti rained over Pike St in Capitol Hill Sunday night. In front of a mass of people stood a vaguely messianic, but totally neon, figure on a chrome shrine while holding a baby doll. The absurdity of this image is as about the best description you can get to sum up Capitol Hill Block Party.

The aforementioned set by The Flaming Lips closed out this year’s Block Party Sunday night with as much spectacle as both the band and festival have become famous for. Touring in support of their latest record, The Terror, the band had to make a few adjustments. Because of the darker and depressing tone of the beautiful and distressing album, the live set took a similar direction. No, Wayne Coyne did not enter in a Zorb and walk across the crowd.  But he did stand on a pyre of chrome connected by light tubes and wielded – at separate times – a toy doll, a wand torch, a horn, and a flashlight gun. The set was heavy on the new album but featured some older cuts like “The W.A.N.D.,” “One More Robot,” and ended with the touching anthem “Do You Realize?”

Going for a less theatrical, but still effective, approach on Saturday was the spectacular collaboration between Killer Mike and El-P called Run the Jewels. The songs on the new record are brutal and violent. Seeing the duo live, however, is a surprising testament to camaraderie. During songs the two would instigate lyrically timed high fives and secret handshakes. The set featured most of their new self-titled record, as well as select cuts from each emcees solo albums. At the beginning of the set El-P mentioned Killer Mike had ate a marijuana cookie earlier in the day and it was starting to hit him hard.

“Y’all are making me reconsider my stance on legalization,” Killer Mike said, as he joked about how strong he found the weed in the Northwest. Despite his inebriation, Mike spit fire on all of the tracks without missing a bit.

“You are an incredible rapper,” El-P said as Mike finished the song “Reagan” from his 2012 record R.A.P. Music (also produced by El-P). Mike replied complimenting how much he loved El-P’s rapping and producing.

The crowd was already amped for Run The Jewels after being enlightened by copious amount of ass in Big Freedia’s set right before. Big Freedia, a transvestite bounce rapper from New Orleans, brought her own backing dancers to twerk and thrust throughout her set. During the song “Azz Everywhere,” Freedia invited five audience members to twerk on stage with her and her crew. She elicited call-and-responses with her songs “Gin In My System” (“I got that gin in my system”/”somebody gonna be my victim”) and “Excuse” (“Excuse”/”I don’t mean to be rude”). The response from the audience was much more inviting than her last stint in Seattle opening for The Postal Service. As she watched her dancers take their twerk solos, Freedia watched their rumps move as if she were Mickey Goldmill or Apollo Creed judging Rocky Balboa’s form. 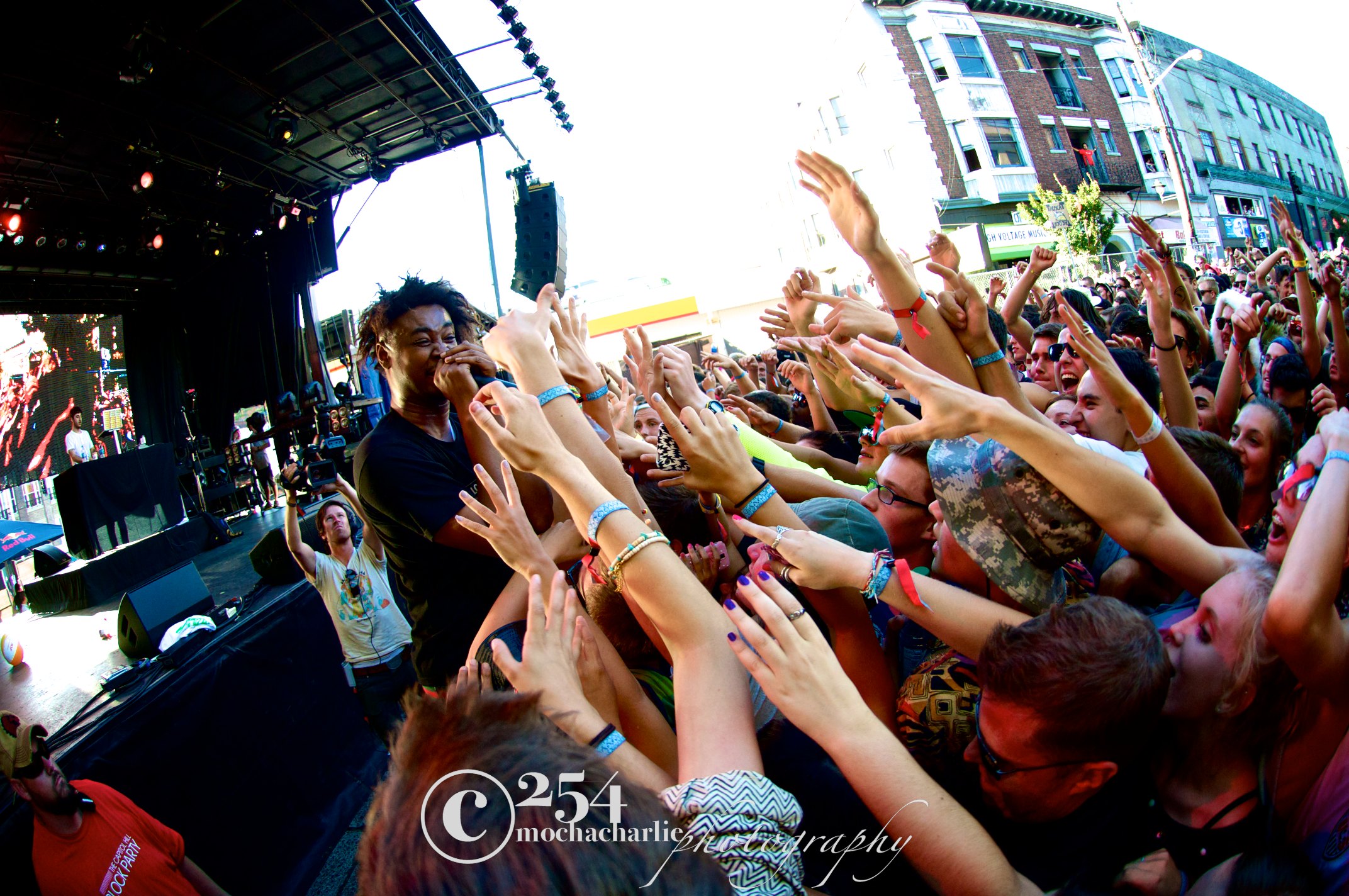 Rose Windows’ Saturday afternoon set revisited the boisterous side of 1970s psychedelic rock. Vocalist Rabia Qazi channeled Janis Joplin in both appearance and attitude as she crooned (things were less Joplin-like when Qazi joined Big Freedia’s twerk team for a song). The band’s instrumentation was tight, going off into long and spaced out jam sessions.

A few smaller local group’s held their own against the flashier acts. Olympia’s Naomi Punk delivered a powerful, droning set with their vocals and instruments filled with reverb at the Vera Project stage on Saturday. A three piece with two guitars and a drummer, the band produced a heavy sound that fit right in with the tradition of both K Records’ aesthetic and Kurt Cobain’s tenacity.

Bellingham group Learning Team took a more lighthearted but electric set on Sunday. The jangly and poppy guitar hooks had the entire crowd dancing and swaying in the afternoon heat. The band’s sound was accessible yet still found itself taking underground vibes with their delightfully clashing guitar tones.

Surrounded by lanterns, Purity Ring brought a swooning and ethereal aura to the main stage on Saturday night. Corin Roddick produced pulsing beats while Megan James sweetly sung melodies in her white, lace gown. Surrounded by lanterns, Purity Ring set the mood. Around his DJ set, Roddick would tap lanterns that would light up to the rhythm of each track. Blues and teals glowed around the two performers.

Local Favorite’s Hey Marseilles delivered a powerful set on the main stage and then strolled over to Cafe Vita for an interview and un-plugged session with KIRO Radio’s Luke Burbank. The band will jump right back on the road to continue their current U.S. tour.

“You’ve probably had your heart broken at least once if you’re at a Frightened Rabbit show,” front man Scott Hutchinson said as he instructed the audience to find someone to dance with during their set. Though the lyrical content was often pessimistic, the band felt energetic and lively.

Check out more photos from Day 3 below… 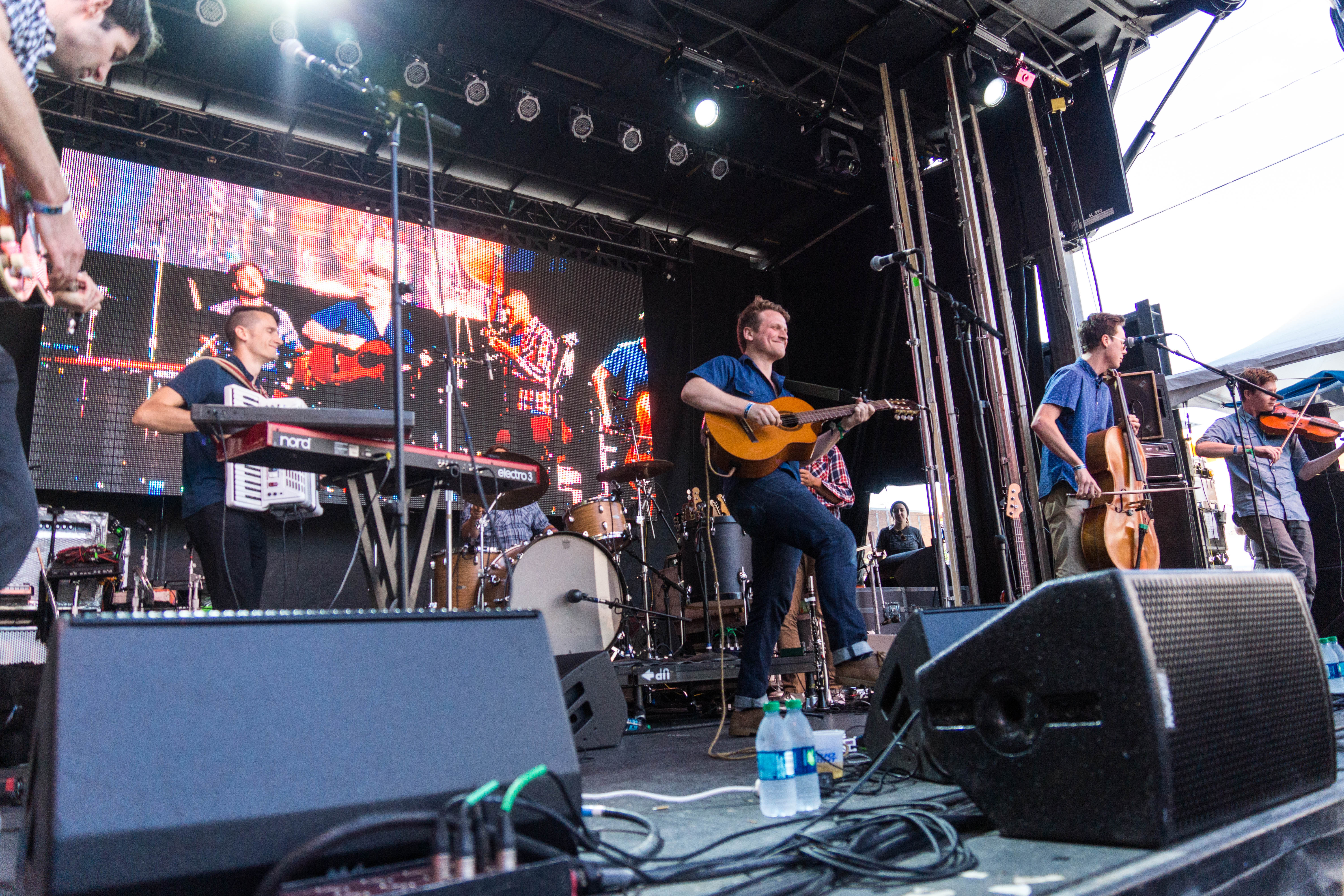 Not only is he a multi-media journalist, he is also an accomplished musician. He is the founder of SMI and drives the creative look, feel and branding for the publication. His years of writing, arranging, and performing live music in a variety of genres inform his ability to communicate the message and the mechanics of music. Roth’s work on SMI reflects his philosophy that music is the universal language, and builds community. He believes it has the power to unite people of every race, religion, gender, and persuasion.
Related ItemsCapitol Hill Block PartyCapitol Hill Block Party 2013Seattle Music Happenings
← Previous Story Counting Crows and The Wallflowers kick off Maryhill Winery’s 2013 Summer Concert Series
Next Story → Portugal. The Man and Avi Buffalo at Showbox at The Market (Photo Slideshow)