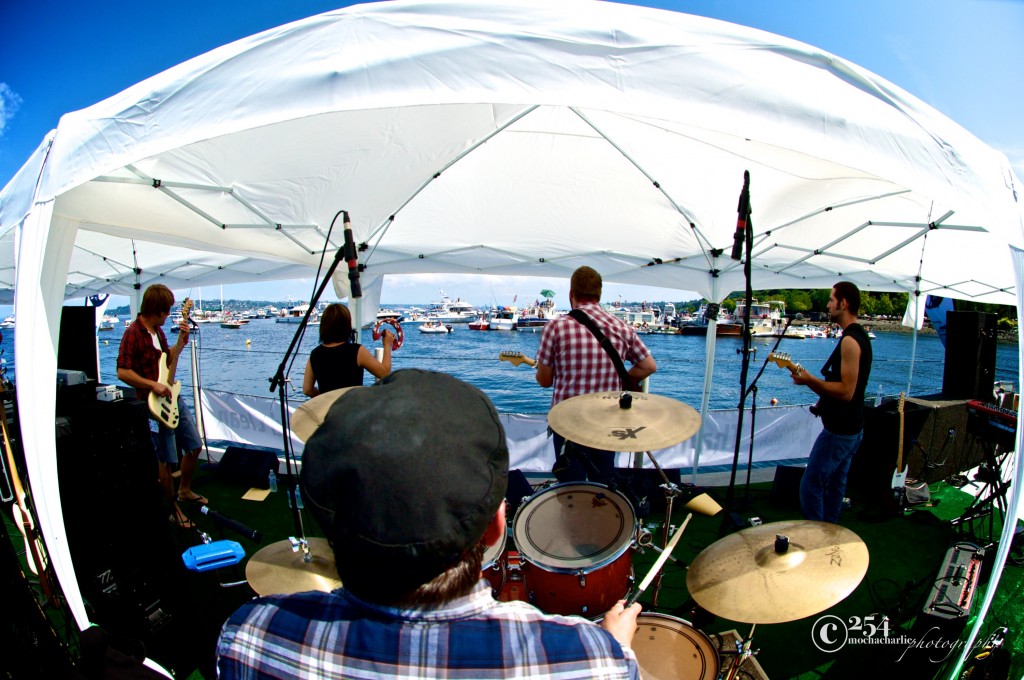 This past weekend summer musical festivals were in full effect. In Darrington, Washington the biggest little festival called Summer Meltdown was celebrating 13 years. Over on the Eastside in Bellevue, Washington 107.7 The End was hosting it’s annual bash, “Summer Camp,” and on the beautiful Orcas Island, Doe Bay Fest was happening as well. There was a little somethin’ somethin’ for music lovers area. Down in the 253 a festival like no other took place at beautiful Pt. Ruston.

The Underwater Music Festival is one of the largest free music events in the Pacific Northwest and the only on-water music festival offered on the West Coast. Bands like Perry Acker, The Fame Riot,  Cody Beebe and The Crooks, Run From Cover and SweetKiss Momma did their thing while throngs of music fans watched and listened from the comfort of their rafts, inner tubes and boats. Proceeds from the event go to raise awareness and funds for Melodic Caring Project.

Festival organizer and Setlist Management’s Sean Hensley shares his thoughts on the festival and the hurdles he had to overcome to make the UMF II a reality. Check out photos from UMF II below.

SMI: Well Sean you did it! You pulled off another successful Underwater Music Festival. How are you feeling about the festival and response?

Hensley – Honestly, I’m overwhelmed with the positive feedback.  They Point Ruston Property on Tacoma Waterfront offer all the beautiful elements of the Pacific Northwest for our Music Festival including a hybrid land and water connection.

SMI: This was the second Underwater Music Festival. It was supposed to happen last year but there were some issues that caused the festival to be postponed for a year. This year it happened and by all accounts it was a stellar day. Given the challenges of pulling something like this off, does it feel even more satisfying given all of the political and bureaucratic hoops you had to jump through?

Hensley: The Underwater Music Festival, started as a backyard boating party by some local Gig Harbor kids, in 2009 at Cutts Island (aka – Deadman’s Island).  The First year there was no music but they called it the UMF on Facebook and 500 people attended.  In 2010, they paid a boat owner to have recording artist Perry Acker performed and 1500 people attended.  That is when all the local authorities learned about the gathering and approached the organizers.  After the 2010 event, I was asked if I wanted to officially re-launch, organize and permit the event.  In 2011, we successfully re-launched the Underwater Music Festival with nearly 7500 in attendance using the platform I implemented.

We wanted to maintain a family friendly boating concert that was free and appealed to all ages and give proceeds to a local charity each year.  The only way to do this was to gather partner with amazing local businesses and offer advertising sponsorships. Then the issues with water safety, sanitation and environmental impact became a real learning curve.

The Cutt’s Island area is a multi-jurisdictional overlay that includes permits from Unincorporated Pierce County, State Parks, Dept. Natural Resources, United Stated Coast Guard and Fish & Wildlife. The only agency that was supportive of the event was the United States Coast Guard.  Every other agency created new regulations or permits in efforts to “help” our event.  In 2012, Pierce County’s Executive Office even changed the title of a Land Music Festival Permit to read – Outside Music Festival Permit to appropriately fit our event with an additional $3100.00 in cost to our free charity community event.  Compare that to neighboring counties who have the same permit for $500.00.  We all know that money make the world turn and although that was frustrating it was a simple fix. Ultimately it was the Dept. of Fish and Wildlife that shut the Cutt’s Island event down stating the area had been re-classified as an endangered Seal Pup Habitat.

The fight was on in 2013 to save the event and fulfill the obligations to all the sponsors who stuck with us on a relocation effort so to answer your question Greg, I’m on cloud 9 that My Setlist Music Team again pulled off another amazing community music event with no incident or impact to the public other that some sunburns and great memories!

SMI: What were some of the highlights for you and the Setlist team this year?

Hensley: Highlights for me have been many. Finding a new location and partnership with Point Ruston Properties in Tacoma that is truly a perfect fit for the UMF.  Some of the new 2013 friendships, partnerships and Sponsors have strengthened the future for the UMF.  These amazing organizations include working with the Northwest Marine Trade Association (aka – The Seattle Boat Show), Taylor Shellfish Farms, Thomas McClure – Liberty Mutual Agent, Cascade Print Media, Citizens for a Healthy Bay and Northwest Creative Imaging.  Another highlight was my on water safety patrols offered by Northwest Freeride.  They Jet Ski volunteers were amazing with our boating community.  The bands this year were stellar of course. Who would not love the likes of Cody Beebe and The Crooks, Run From Cover, The Fame Riot, SweetKiss Momma and crowd favorite – Perry Acker.

SMI: How much money did you raise for your beneficiary?

Hensley: We have picked a special charity every year.  In 2011 we raised money for the Girls Campaign. In 2012 it was the Groove – Music for Youth, a Crime Stoppers charity in Pierce County. This year we choose The Melodic Caring Project from Seattle.  They do amazing work for kids in hospitals around the county and we love everything they do.  We are still paying the event bills but look forward to counting all the proceeds and making a donation to the MCP sometime in September of this year.

SMI: What is some of the positive feedback that you received from folks that attended the Festival?

Hensley: We had several families say it was the best event they have ever attended on water. We had many people who learned for the first time around Point Ruston, The Melodic Caring Project and/or a new band to love and follow.  So rewarding to have all around success!

SMI: Any plans for a UMF III?

Hensley: I’ve learned the UMF platform could be successful from LA to Seattle, just give me water, but we are hopeful to build a long-term home at the beautiful Point Ruston location.  I also look to grow the sponsorships levels so the community can enjoy some national artists on our stages. We will also incorporate more activates in hybrid land growth, maybe even a land stage.

SMI: What will you do differently going forward?

Hensley: Moving forward I plan to grow a long term festival committee and team so I don’t carry some much of the work load.  Day of event is smooth as butter but the behind the scenes stuff can always be better managed. I am still cleaning up and running errands…

SMI: What’s next in terms of big shows coming up for Setlist Management artists?

Hensley: All of our artists are continually pursuing music industry success while on their own music career paths.  You can watch for a new 2013 CD release from Perry Acker.  Ben Union is still successfully touring their last CD release Vol. II and The Fame Riot is continually releasing new stuff for their viral fan base. I often love to brag about the amazing resume of all these artists because who else will but I can honestly say Setlist Music Solutions is proud to work with some of the best recording artists on the West Coast! 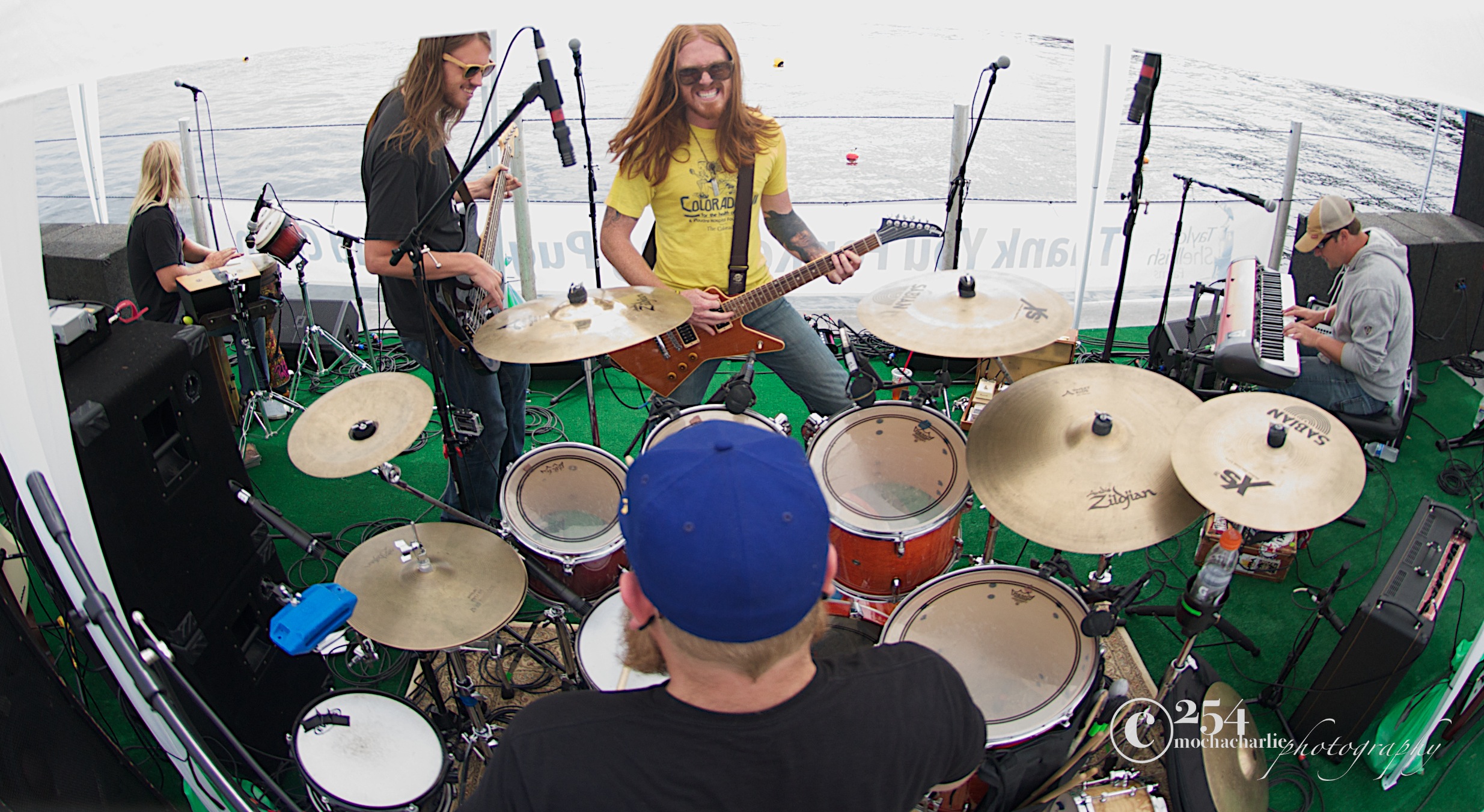 Not only is he a multi-media journalist, he is also an accomplished musician. He is the founder of SMI and drives the creative look, feel and branding for the publication. His years of writing, arranging, and performing live music in a variety of genres inform his ability to communicate the message and the mechanics of music. Roth’s work on SMI reflects his philosophy that music is the universal language, and builds community. He believes it has the power to unite people of every race, religion, gender, and persuasion.
Related ItemsCody Beebe and the CrooksGreg RothMelodic Caring ProjectMocha CharliePerry AckerSean HensleySeattle Music HappeningsSetlist ManagementSweetKiss MammaThe Fame RiotUnderwater Music Festival
← Previous Story Fitz and The Tantrums do their new thing at Showbox SODO (Photo Slideshow)
Next Story → PWI (People With Instruments) grooves on through the weekend