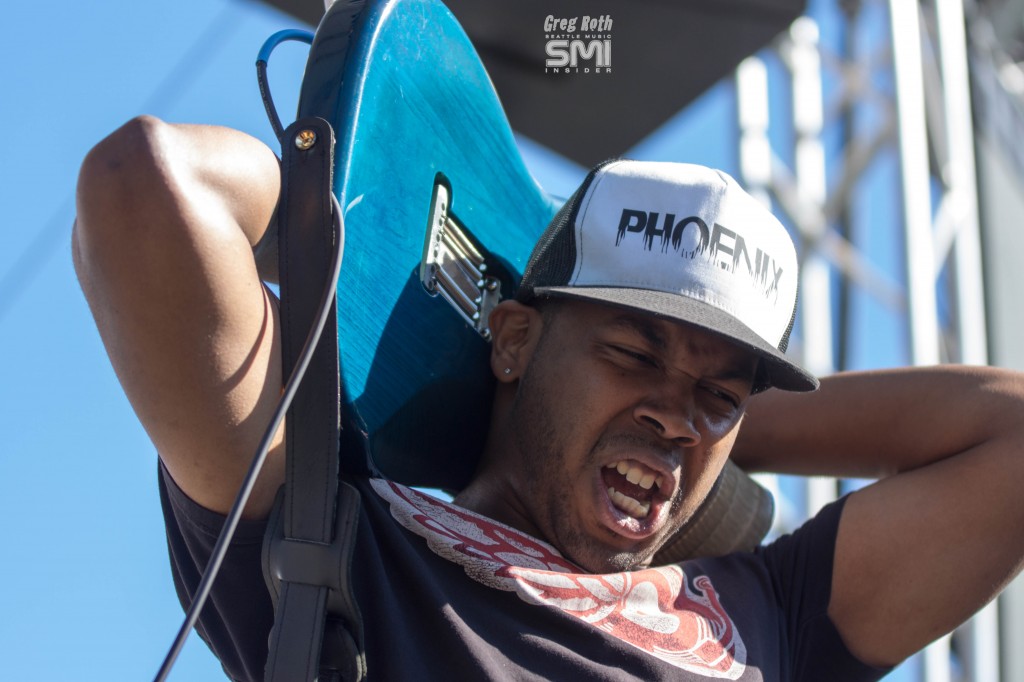 SMI Partner Melodic Caring Project will be streaming some performances from the Starbucks stage at Bumbershoot 2013. At 12:00 on Sunday, September 1st Ayron Jones and The Way will bring their gritty, blues based rock to children battling serious illnesses. Jones made his Bumbershoot debut last year as a last minute fill-in, and electrified the crowd with his passionate performance and high end guitar pyrotechnics.

Jones will hit the stage  at 12:00 pm with an on camera interview to follow.

Formed in Seattle just over three years ago, Ayron Jones and the Way blend alternative rock, punk, blues, hip hop, and soul, punching out an emotional body of work with a memorable twist. Self-described as “Stevie Ray Vaughan meets Nirvana,” the trio is currently recording their debut album with Sir Mix-A-Lot.

Vicci Martinez will perform at 10:00 on the Starbucks stage. That performance will be streamed as well with accompanied by an interview prior to the show.

After spending high school honing her talents and playing farmer’s markets in Tacoma, Vicci Martinez began independently releasing music and touring the country. After her decade of experience in the music industry, it was NBC’s music competition The Voicethat opened doors for the next phase of her career in 2011. After landing among the top four Voice finalists due to her riveting, roaring performances, Martinez made her major label debut via Universal Republic in 2012.

You can view the respective performances via Ustream.

MCP is driven by the husband and wife team of Stephanie and Levi Ware. They have seen first-hand that people from other cultures and ethnicities respond to songs with lyrics they couldn’t even understand because music can be felt and understood.

It is a proven fact that music crosses both language and culture; it crosses the boundaries of belief and upbringing. Music is a universal medicine suitable for treating any ailment whether physical, mental or psychological.

There are two things That MCP believes to be profoundly effective, healing and encouraging: (1) People showing genuine love and compassion to one another, and (2) Music

The mission of the MCP is to bring these two together and share them with people in need.

To find out more about Melodic Caring Project, donate or stream a show, please visit http://www.melodiccaringproject.com.

Not only is he a multi-media journalist, he is also an accomplished musician. He is the founder of SMI and drives the creative look, feel and branding for the publication. His years of writing, arranging, and performing live music in a variety of genres inform his ability to communicate the message and the mechanics of music. Roth’s work on SMI reflects his philosophy that music is the universal language, and builds community. He believes it has the power to unite people of every race, religion, gender, and persuasion.
Related ItemsAyron JonesAyron Jones & The WayLevi WareMelodic Caring ProjectSeattle Music HappeningsStephanie WareVicci Martinez
← Previous Story Bumbershoot 2013: You can’t eat it all
Next Story → Looking back on Bumbershoot 2013: Day 1 Highlights (Photos)