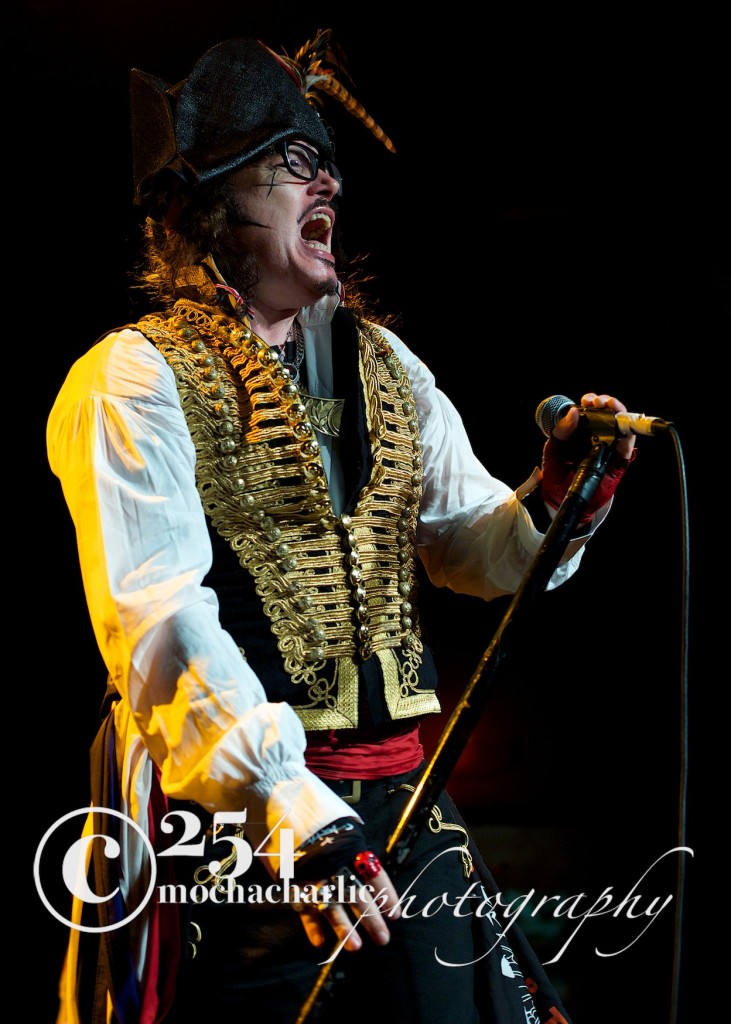 Adam Ant at Showbox @ The Market (Photo by Mocha Charlie)

It’s not every day that a musician/band can completely sell out a venue, let alone one that hasn’t even been on the Billboard charts for nearly 20 years. But, last Saturday 80’s wave-pop icon, Adam Ant, (whose real name is Stuart Leslie Goddard), did just that at Showbox at The Market! Adam’s new band, which formed in 2010, “Adam Ant & The Good, the Mad & the Lovely Posse”, played a 32 song set including old favorites and new ones off of his latest endeavor “Adam Ant is the Blueblack Hussar in Marrying the Gunner’s Daughter”

Dressed up in (what we know as) his signature look, Ant wooed the crowd, many of which sang along with every song. There were a number of fans dressed in similar costumes that cheered and sang throughout the crowd. Ant’s stage attire changed slightly during the show. Once, when he removed his glasses when singing “Wonderful” to which he described as “The only true love song I ever wrote”, after a long relationship had ended. (I felt that song showed his vocal strength & range more than the others in his set.) He also removed his outer jacket during “Strip”, which also got nearly every cell phone in the room up in the air during the first few bars of the song. (If you’ve ever been to the Showbox Market, then you’ll know it when I say, that song also got the floor hopping.)

Ant played guitar on numerous songs throughout the evening center stage, as well as moving about freely singing lead vocals only on the remainder. Thanking the his fans more than once during the show, he was enthusiastic about how the audience was responding to his performance. His band included two drummers who didn’t miss a beat. When he introduced them to the crowd, he chanted “Girl Power” (as one of his drummers was female).

Mid way through his set, he told a story about one of the most frequently asked questions he’s asked in interviews, “Did you miss music when you weren’t performing?”. (He took nearly 12 years away from the stage playing music from 1995-2006 to focus on his film/TV roles.) He mentioned that he did, but only when he ate Chinese Food. When he was handed the wooden chopsticks, he’d subconsciously pull them apart and couldn’t help but pretend he was a drummer, “playing them” on the table.

This isn’t Ant’s only billed “World Tour” in recent years (as he’s been playing regularly around the globe since 2011), and from the attendance he’s been getting, I’m pretty sure it won’t be his last. This leg of the tour wraps up on September 20 at The Hard Rock (on the strip) in Vegas, but will pick up again with European dates in the beginning of 2014 for the next leg.

Mocha Charlie is an amazing photographer who has a real passion for music. She has her finger on the Pacific Northwest music pulse. She covers and shoots several shows per month in and around the region. She a brilliant photo journalist but most importantly, she is also a mother who does her best to balance out her life and live it to the fullest. Mocha Charlie uses her passion and talent to support the community, her friends and family any way that she can.
Related ItemsAdam & The AntsAdam AntMocha CharlieSeattle Music HappeningsThe Showbox at The Market
← Previous Story HIM Spreads The Love Metal at KISW’s Pain In The Grass (Photos)
Next Story → Spending two nights together with Grouplove (Photos)