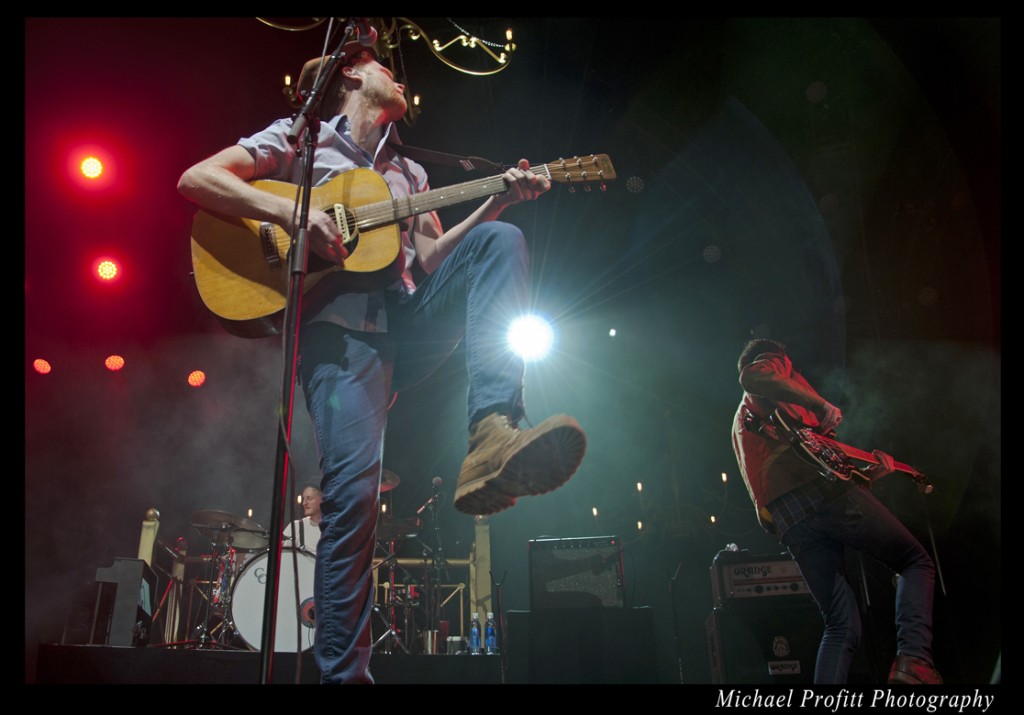 The Lumineers headlined two nights at Marymoor Park on Friday and Saturday, marking a significant weekend for the entire genre of mainstream indie-pop folk. The band played a set of sold-out shows in their return to the city that made them famous; a signal that their trajectory is still going nowhere but up. Meanwhile, across the country in Bonner Springs, Kansas, their fraternal twins, Mumford & Sons, were playing their final tour stop before announcing an indefinite hiatus. Though people may view these two happenings as seemingly isolated incidents, I prefer to view them as the universe reaching a sort of equilibrium. In a notion similar to that of Highlander, there can be only one modern-day perversion of American folk history.

As I stood among the masses of people gathering before the show, the appearance of the stage provided a stark contrast: Here was an over-the-top production, with all the money and technology of a major record label, being wasted on a lineup of simplistic bands running mandolins and cellos through Orange practice amps. The opening group, Nathaniel Rateliff, had plenty of potential but lacked any promising material. Mirroring a lumberjack Eddie Izzard, Rateliff carried a powerful baritone reminiscent of young Johnny Cash, while being capable of crooning with a raspy hint of the Tallest Man on Earth.

Unfortunately, the rest of his band lacked any sort of flavor beyond the alarming visual comparison between his cellist and Tilda Swinton. The band’s drummer seemed as though he would rather be anywhere than here, his endorsed C&C drum set going to waste on a number of songs in which he simply nursed the kick drum and occasionally hit one cymbal with a mallet. It is always frustrating to see a great piece of equipment wasted on a second-rate musician.

The songs lacked any spark, encouraging many members of the audience to continue their private conversations within feet of the stage. Standing in the crowd felt like waiting for your mom to try on blouses at Nordstrom. You periodically shift your body weight onto a new leg and fill the time by compulsively checking your phone. Any air of Johnny Cash did not translate into the music. Rateliff’s songs lacked any authenticity or emotion, and were nothing but the same pop-folk trifles that have comprised the set lists of so many trending artists. What might have been interpreted as a rough edge in demeanor was lost on a low buttoned Urban Outfitter shirt and artistically shallow tattoos. If this was the 21st Century reincarnation of the Man In Black, he should have spent more time in Folsom Prison. But the biggest sin of Nathaniel Rateliff was that they left the audience feeling less excited by the end of the set than they were in the beginning.

In a similar vein of bands that lack originality came Dr. Dog. The Pennsylvanian rockers were simply the formulaic children of Wilco’s legacy. Songs such as “That Old Black Hole” and “Jackie Wants a Black Eye” were nothing but an upbeat-pop attempt at reinventing the genius of Jeff Tweedy (Wilco). That being said, Dr. Dog was still the closest thing on the bill to a real rock show – at least they had a bass guitar instead of a cello. But being the heaviest rockers here meant about as much as the title of tallest jockey in the Kentucky Derby. The crowd seemed surprised when Stelth Ulvang, of The Lumineers, joined the band onstage for a rendition of Architecture in Helsinki’s “Heart It Races.” Throughout the set, lead singer Toby Leaman often seemed limited in his roles as both vocalist and bassist. During the songs where his bass was no longer required, he transformed into a singing golem; leg lifted, toes pointed, bass draped over his back, curled over the crowd with a sinister smirk which added more attitude to the songs than could ever be translated through recording.

What may have been the most memorable part of the entire show for me was the loyal devotion of their fans because, apparently, I was standing between their two biggest. Both former fraternity brothers were belligerently drunk and reaching across the crowd to discuss everything from the band members’ names to the merch tent where one of them could buy the other’s U of O colored Dr. Dog ski-beanie. As the band left the stage, one of these two shouted “One more song! F**k The Lumineers!” And to this, a war cry from every teenage girl within a 12 mile radius erupted, as though he had personally cancelled One Tree Hill.

I began to feel the excitement build before The Lumineers had even come out: the crowd crammed together like a giant game of Twister, and shrill prepubescent voices grew louder with feverous intention, while a lesbian couple near me began yelling at an older gentleman who was blocking their view of nothing. The instrument sound check took about ten minutes, only to be followed by the fifteen-minute unveiling of six large chandeliers. As the covers fell, the screams of the girls increased and all I could think was that I hadn’t seen a group of women this excited about lighting fixtures since Black Friday at IKEA. Soon The Lumineers began a concert in what I have defined as laissez-folk. Lead singer Wesley Schultz came out branding his most Neil Young-inspired hat, embodying the persona of the great Levon Helms; holding a carefree Appalachian attitude, even though he hailed from New Jersey. Cellist and backup vocalist Neyla Pekarek pranced around the stage, like a spitting image of SNL cast member Abby Elliott, while bassist Ben Wahamaki was unremarkably quiet throughout the show. Drummer Jeremiah Fraites and barefoot pianist Stelth Ulvang carried the band as the group’s strongest musicians.

Their set was like a steam-engine barreling down the track with a constant level of commotion; though there were quite a few songs that brought the communal energy down a few notches, nothing sent the band rocking to eleven. They covered a friend, Sawmill Joe’s, track “Ain’t Nobody’s Problem” as well as Bob Dylan’s “Subterranean Homesick Blues”, but it’s nearly impossible to do justice to a legend of that caliber and their version was ultimately just the Samsung to Bob Dylan’s iPad. Throughout the show, the band members remained bubbly and pleasant, reminiscent of the cast of Sesame Street. Then it came time to play the song that everyone had come to hear. Schultz introduced it by thanking John Richards of KEXP for getting them their start, and spoke for a second on how appreciative the band was for their success. But as soon as they began to play, you might as well have renamed the track “Ho Hey, Girl” because from the sound of all the crying women, you would have thought Ryan Gosling was on stage.

While the show wasn’t bad, for me it was nothing spectacular either. By the end of it, I kept turning to my companion and asking, “Didn’t we already hear this one? … Okay, I know this song was already played.” I can’t help but ponder how this style of music became so huge that one of the least exciting bands I have ever seen could be greeted with such rock star status. Between The Lumineers, Mumford & Sons, and Of Monsters & Men, an entire generation typically associated with danceable bass lines and discriminatory rapping have become enamored with thick beards and musical simplicity.

It makes sense that this form of music would catch on with its D.I.Y. attitude, providing teens with the notion that, since those rock stars are simply playing a basic mandolin with a four-on-the-floor beat, anything is possible. But whatever happened to the unmatchable prowess of top-shelf musicians? Where are the days of looking to someone like Jimmy Page or Neil Peart and worshiping them because we could never be like them? Our generation has skipped the first two steps of turning on and tuning in and has decided to live our entire lives around the notion of dropping out. We don’t want art that will expand our thinking; we want entertainment that will help us to feel detached. That’s why bands like The Lumineers are so successful; because they’re simplistic and they make us feel good. It’s the kind of music that fits in with our ideal image of a rainy day, snuggled up at Starbucks. For now, the inexperienced have triumphed over the virtuosos. It’s just a reminder that anyone can become a famous musician; even if they can barely play an instrument. 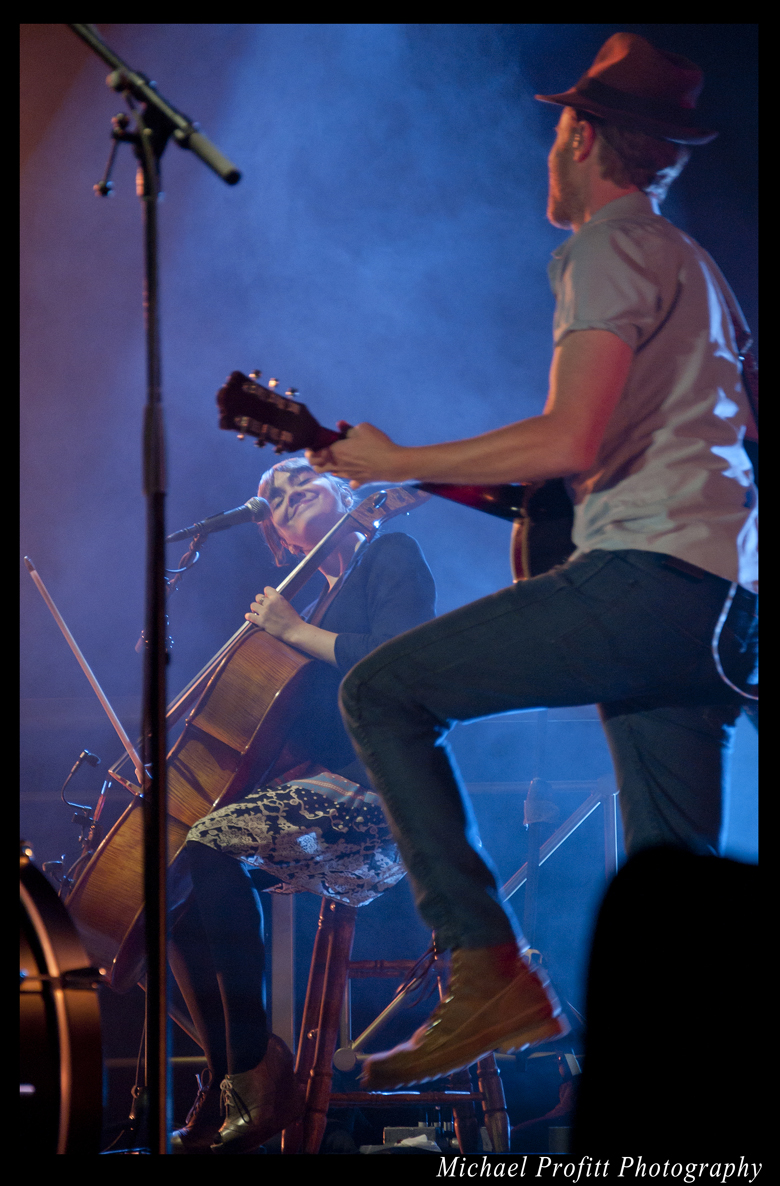 Ian Cunningham is often described as either an old-soul or the most crotchety twenty-something you’ll ever meet (depending on the source), Ian holds a critical eye for modern music. Idolizing Keith Richards, Warren Zevon, and Lester Bangs, his musical preferences thrive decades prior to those of his peers. Raised in Portland, OR, he moved to Seattle in 2012 to continue drumming for the indie surf band Faire du Surf as well as to pursue an English degree from the University of Washington. Though the band has since dissolved, he is the current drummer and manager for The Mama Rags. In what little free time he has, Ian is a die-hard Seahawks fan and an avid record collector; his favorite album being Those Shocking Shaking Days. This October, he will be the proud father of a baby boy.
Related ItemsIan CunninghamMarymoor ParkMichael ProfittNathaniel RateliffSeattle Music HappeningsThe Lumineers
← Previous Story Plain White T’s Shine At The Central Washington State Fair
Next Story → Kutless Spreads The Love At The Central Washington State Fair