Home / Reviews / Local Artists / New Music Preview: ‘Let’s Be Still’ from The Head And The Heart

New Music Preview: ‘Let’s Be Still’ from The Head And The Heart

By Christine Mitchell on October 10, 2013@Housetornado37 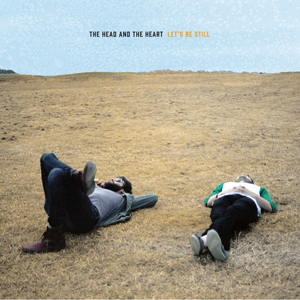 The world is bigger than we are. That certainly feels plain as one listens to The Head And The Heart’s new album, Let’s Be Still, out October 15th on Sub Pop Records. Time and time again the hugeness between a human and another human and the unquantifiable universe is detailed in lyric and expansive musical arrangement by band members Josiah Johnson (vocals, guitar, percussion), Jonathan Russell (vocals, guitar, percussion), Charity Rose Thielen (violin, vocals), Chris Zasche (bass), Kenny Hensley (piano), and Tyler Williams (drums). As a result we have here a sophomore effort that is a bit less bouncy, a bit less urgent, and a whole lot more complex than their eponymous first album. I find that it is one of those slow-growers that at first sounds more homogenous than it really is until you start digging into the nooks and crannies, and more mysterious than it really is until you begin to relate.

And relate you will. ‘Homecoming Heroes’ opens as probably the feistiest track of the bunch; the music trips and traps along merrily enough but the lyrics speak out against a decade-long war and flag-waving uber-patriotism. “I just want you off my back”, sings Johnson. “Get out of my head.” ‘Another Story’ was written in response to the Sandy Hook shootings and resonates with the sadness of seeing the same scenario played out over and over again, and yet the world keeps turning.

After these first two heavies, ‘Springtime/Summertime’ is a welcome happy respite as long as you aren’t listening to the lyrics. The music recalls lovesick songs from sixties girl groups injected with weird, jerky, psychedelic disco and invites you to dance. I have heard a lot of praise for the male singers in this group, but I am really attracted to Charity Rose Thielen’s vocals on these tracks. Her voice has an interesting depth and timbre, and she can also yelp like Karen O. (awesome!). Thielen trades vocals with Jonathan Russell (who sounds like a smooth Cobain) on the prom-worthy ‘Let’s Be Still’, it’s a sweet slow-dance lullaby that reminds us that “the days turn into months/ the months turn into years/ so just for a moment let’s be still”. It is perhaps not the most reassuring sentiment for snuggling; but it seems to fit well with the times and the themes presented on the album.  Life struggles and separation, whether actual or emotional, crop up over and over. The instrumentation runs from folk to pop as certain moments call up CSNY and others seem to draw directly from later Beatles albums. The band claims to be a fan of My Morning Jacket and I can definitely see their influence here.

I find that you have to be in the right frame of mind in order to listen to a rather maudlin, folksy album such as this; which is not a bad thing at all, but it is something to be aware of. There are times when I simply cannot listen to an Andrew Bird album…a song of his will come up and I automatically think “what a whiner” and skip over it. But then there are those days where all I will listen to is Mr. Bird, over and over again. Let’s Be Still is an album like that. I imagine myself on a long airplane flight, wearing my big fat headphones, listening to the majestic strains of the closer ‘Gone’, sitting next to a stranger and staring out the window as the earth and the clouds scroll by and The Head And The Heart describe my isolation perfectly. Now, to find a way to make that happen…

Christine Mitchell has been poring over album liner notes pretty much since she acquired the skill of reading, and figured out the basic structure of rock songs at an early age. Whether it’s the needle popping into the first groove of the record, the beeps that signal the beginning (or end) of a cassette tape, or digital numbers ticking off the seconds from zero, music brings Christine happiness, ponderous thought, opportunities for almost scientific study, and sometimes a few tears. When she started attending live shows two decades ago, a whole new piece of the puzzle clicked in and she has been hooked ever since.
Related Items"Let's Be Still"Christine MitchellNew Music PreviewNew Music ReviewSeattle Music HappeningsThe Head and The Heart
← Previous Story Timber! 2014 passes will be available on Rocktober 15th
Next Story → The Head and The Heart share a secret at Columbia City Theater (Photos)