By Christine Mitchell on November 8, 2013@Housetornado37 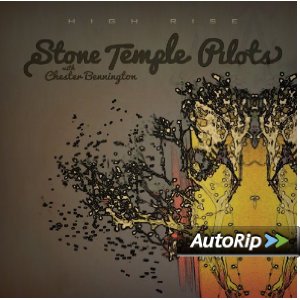 I should so sue me since I dared myself to review this album and I lost. I thought that perhaps this new Stone Temple Pilots (now with Chester Bennington of Linkin Park!) EP High Rise was some sort of elaborate joke; I had my suspicions that it would suck, and I definitely thought that I would have a laugh at this EP’s expense. Original STP singer Scott Weiland was a hot mess, but his vocals helped define not only the Pilots’ sound, but also the sound of commercial grunge in the ‘90s. The ongoing legal battles between Weiland and the other members of STP are extremely acrimonious; neither party wants to allow the other access to the Stone Temple Pilots name or songs. And then we have Chester Bennington of Linkin Park, and this is all supposed to work together…how? Who told these guys that this was a good idea? This was my mindset going into this review.

First off: forget the rap-scream-yell Bennington uses liberally with Linkin Park. True, ‘Out of Time’ starts the album off with a blistering Chester power note, but the music almost immediately segues into a Soundgarden-esque guitar riff, and Bennington’s voice is…beautiful, with an unexpected emotional depth. My interest is piqued. And when ‘Black Heart’ starts and I start hearing something that makes me think of Cheap Trick, but fresh and, dare I say, swanky, I’m starting to feel impressed. ‘Same On The Inside’ sounds the most like what I would expect to hear from STP, but with Bennington’s vocals things are taken to a different plane, one that fills the songs with light instead of doom. When Chester sings ‘When will we stop pretending/We’re all the same on the inside?’ in a clear, wondering voice, I find myself wondering right along with him. The chorus to ‘Cry Cry’ sounds like a nicer, cleaner version of a Poison tune; it’s nice but not memorable, nor is the closer ‘Tomorrow.’

All in all, I was pleasantly surprised. The band sounds great, and better yet, along with Bennington they are most definitely forging a new sound; one that is more ‘of today’ and less ‘Stone Temple Pilots’. My two cents is that STP+CB take this thing that they have and run with it. In fact, they could probably rebrand themselves (hello, Velvet Revolver?) as a supergroup and do quite well.

Christine Mitchell has been poring over album liner notes pretty much since she acquired the skill of reading, and figured out the basic structure of rock songs at an early age. Whether it’s the needle popping into the first groove of the record, the beeps that signal the beginning (or end) of a cassette tape, or digital numbers ticking off the seconds from zero, music brings Christine happiness, ponderous thought, opportunities for almost scientific study, and sometimes a few tears. When she started attending live shows two decades ago, a whole new piece of the puzzle clicked in and she has been hooked ever since.
Related ItemsChester BenningtonChristine MitchellLinkin ParkNew Music PreviewSeattle Music HappeningsStone Temple Pilots
← Previous Story New Music Preview: Pearl Jam – ‘Lightning Bolt’
Next Story → Live Music Preview: Atlas Genius, Family of the Year, & Dale Earnhardt Jr. @ The Neptune 11/11/2013