Iron and Wine soars high at The Paramount (Photos)

By Alicia Kamenick on November 9, 2013@corianderstem 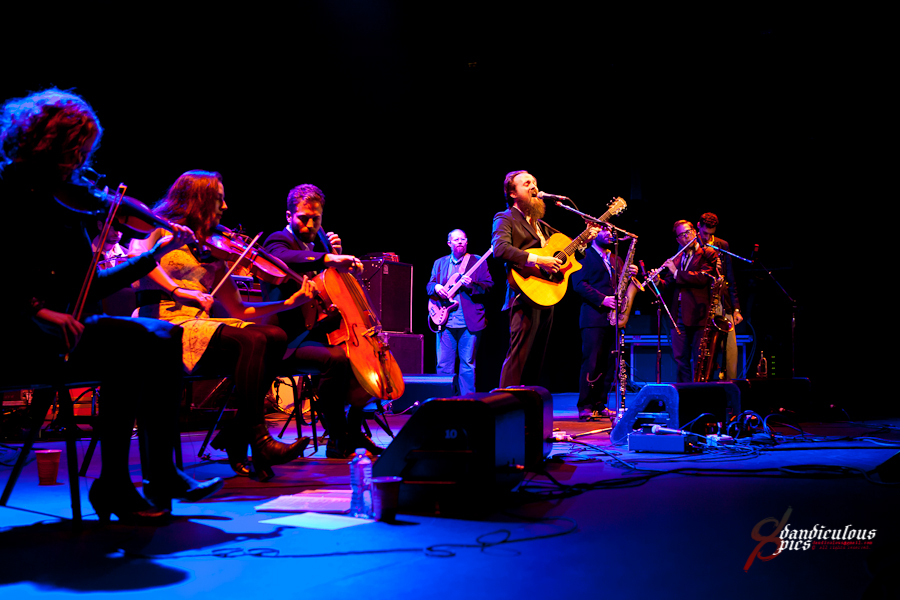 Seattle loves Sam Beam … and Sam Beam loves us right back. Every happy fan who called out “I love you!” last night at Iron and Wine’s show at the Paramount got a kind “I love you too” back from the singer.

Of course, you have to be careful what you shout out, because you might just get it. The obligatory call of “Free Bird!” led to a few verses of the song during the acoustic portion of the show when Beam asked for requests.

The songs soared in a live setting with the backing of a full band, and the show sometimes took on the feel of a gentle revival, with handclaps, dancing horn players and strings, Beam’s comfy blanket of a voice floating over it all.

Highlights included Caught In the Briars, with an instrumental break that broke down into what seemed like formless cacophony before returning to its gentle sway, and Black Candle, introduced by Beam as a “cool, weird and fun” track.

British singer-songwriter Laura Mvula opened the show with her own gospel-tinged set. The Mercury Prize nominee performed songs from her debut album Sing to the Moon, backed by her own string (and harp) section, and beautiful full-band harmonies. She closed her warmly-received set by coming out from behind her keyboard for Green Garden and That’s Alright, ending on a high note with their driving, spirited beats.

Alicia is a Midwest transplant who loves Seattle but misses thunderstorms. Her musical obsessions began when her coolest aunt gave her a copy of K-Tel’s Rock 80 album for Christmas when she was 7. She spent many years studying piano and voice, but the force of rock and roll won, so while she still sings in a local chorale, her true musical passions lie more with The Beatles than with Beethoven. When she’s not working at her job in HR, she can be found singing bad pop songs at the top of her lungs … although sometimes she does that
Related ItemsAlicia KamenickDan RogersIron and WineLaura MvulaSeattle Live MusicSeattle Music HappeningsThe Paramount
← Previous Story SMI Radio Ep. 94 On Demand: Kithkin, Sean De Tore & Rachel Belle (KIRO Radio)
Next Story → A look back at Joe Satriani and Living Colour at The Paramount (Photos)