By Alicia Kamenick on November 27, 2013@corianderstem 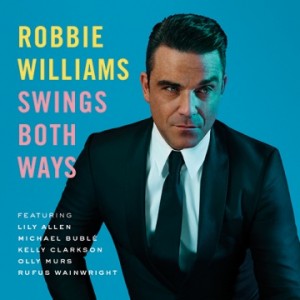 Alas, poor Robbie Williams. A big star everywhere but America.  And dang it, what a shame. Dude has some serious pop chops. A great voice, and a tongue firmly planted in his smirk.  He’s been putting out albums steadily since his almost-a-hit-in-the-US debut album The Ego Has Landed. (Remember “Millennium”?  “Angels”?  No??  Again, alas poor Robbie Williams.)

His latest release, Swings Both Ways, is hi second album in the swing/big band/standards genre, following 2001’s Swing When You’re Winning.  Rather than coming across like an “I’m old now, so it’s time to put out my album of standards, because that’s The Thing To Do” album (hello, Rod Stewart and Paul McCartney), Williams’ take feels fresher and more fun, partially because one could easily picture Williams carousing across the stage in front of the band like a British Boy Bander Brat Pack leader.

That description might bring to mind a British Michael Buble, but I don’t think Mr. Buble would sing a song called “No One Likes a Fat Pop Star.”

When I get faint I chew through my restraints
It’s the best meal that I’ve had all week,
If I could eat my own words, I’d tear through the verbs
But nobody pays me to speak.

While the album is fun, there’s little that surprises as far as arrangements go, save for a slowed-down “If I Only Had a Brain” and the aforementioned “… Fat Pop Star,” with its circus organ and opera chorus.

This isn’t the album that’s going to finally make Williams a star in the US, but I can still hope that day is coming.

Alicia is a Midwest transplant who loves Seattle but misses thunderstorms. Her musical obsessions began when her coolest aunt gave her a copy of K-Tel’s Rock 80 album for Christmas when she was 7. She spent many years studying piano and voice, but the force of rock and roll won, so while she still sings in a local chorale, her true musical passions lie more with The Beatles than with Beethoven. When she’s not working at her job in HR, she can be found singing bad pop songs at the top of her lungs … although sometimes she does that
Related ItemsAlicia KamenickNew MusicNew Music PreviewNewsRobbie Williams
← Previous Story SMI New Music Preview: Glen Hansard – ‘Drive All Night’ EP
Next Story → SMI Live Music Preview: Lissie at The Crocodile (12/5/13)