Black Joe Lewis delivers a knockout at the Neptune (Photos)

By Christine Mitchell on December 3, 2013@Housetornado37 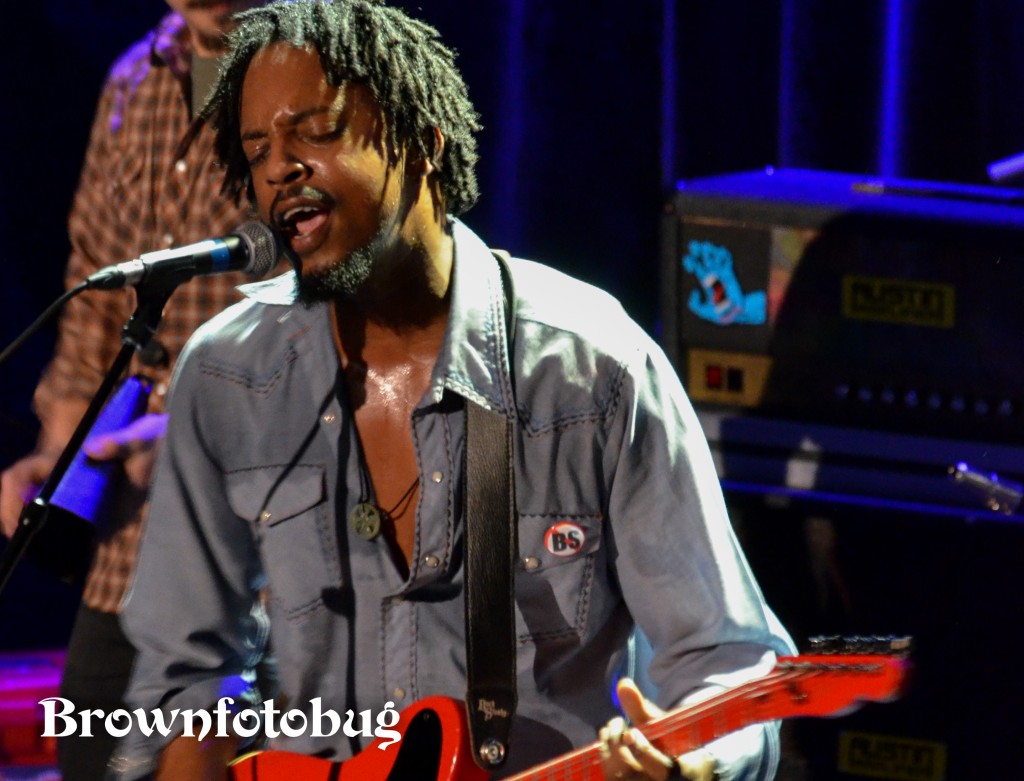 If you ever get the feeling that rock-n-roll has run its course, is washed-up, over, done with, or dead, let me offer  three bands up to you as an affirmation to the contrary: Black Joe Lewis, Radkey, and Think No Think. Currently touring in support of Austin-based Black Joe Lewis’ latest effort Electric Slave (Vagrant), their time at the Neptune Theater ranged from arena-worthy straight up rock to plunge-ahead punk to rowdy funk-soul-blues fusion.  Putting those three styles into one room together might seem like sort of a head-scratcher, but it was all laid down at the altar of rock, and it was good. No, it was awesome.

The night started off with Think No Think, another Austin band, and the crowd quickly realized that it was time to listen or be left behind. Lead singer and guitarist John Dowey has a voice that sounds like a Jack White/young Robert Plant hybrid and some serious guitar skills. Rounded out by bassist Joe Pannenbacker and drummer Nick Bakke, the trio offered up a punk-tinged, full-bodied heavy rock sound  that let everyone in the room know that they were more, much more, than just an opening band. You wouldn’t normally expect to see guitar-god antics at this point in the show, but hell, they were there and they were absolutely warranted. I urge you to check out their EP, available on Think No Think’s Bandcamp page.

Next up was Radkey, a punk outfit consisting of three brothers (Dee, Isaiah, and Solomon) that hails from St. Joseph, Missouri. Our lovely photographer Arlene and I were able to chat with the band before they hit the stage, and they were the nicest kids you could imagine, labeling their music ‘Afro-Punk’. Little did we realize that these sweet boys were about to kill it onstage. Dee charged through the band’s fast-paced, head banging songs, punishing his guitar and singing with a surprisingly deep, Danzig-like voice. Isaiah not only kept up the pace on bass and backing vocals, but also introduced the crowd to his own theatrics, leaping from the drum set to the stage and thrashing about all over the floor in a rock-induced frenzy. They were egged on by many loud whoops and cheers from the crowd, who loved what they were seeing and hearing. Drummer Solomon anchored the band to the stage and provided stability with his well-timed attacks on the drum kit. These three aren’t your average ‘boy-band’, indeed.

Now, when you have such high-caliber openers as there were on this night, it takes someone like Black Joe Lewis to top it all off. With a roadhouse-blues sound injected with a heavy dose of funk and a sprinkle of Springsteen at a revival, Black Joe, his gritty James Brown voice, and his gorgeous Telecaster guitar took the packed crowd and got them moving. And it wasn’t just the audience:  everyone playing the music was enjoying themselves immensely as well; from the tenor and baritone saxophonists to the bassist and the drummer. The tenor saxophonist seemed particularly happy to be there and he grooved enthusiastically as he switched from sax to tambourine to the cowbell. The songs had a wide stylistic range; some sounding vaguely grungy (as in ‘Skulldiggin’ off Electric Slave) and others staying more inside the funk/blues outline. Lewis was at times tender with his guitar, at others he played it fiercely, and at others it seemed as he was attacking it, playing it several times with his teeth a la Jimi Hendrix. His shirt was dripping with sweat long before the band’s set was over, and with all of the dancing that was going on I’m pretty sure he wasn’t the only one. It was a high-energy kind of night, and we coasted that high all the way home, confident that some things are still right with the world. As Pete Townshend said, “Long Live Rock!”

Christine Mitchell has been poring over album liner notes pretty much since she acquired the skill of reading, and figured out the basic structure of rock songs at an early age. Whether it’s the needle popping into the first groove of the record, the beeps that signal the beginning (or end) of a cassette tape, or digital numbers ticking off the seconds from zero, music brings Christine happiness, ponderous thought, opportunities for almost scientific study, and sometimes a few tears. When she started attending live shows two decades ago, a whole new piece of the puzzle clicked in and she has been hooked ever since.
Related ItemsArlene BrownBlack Joe LewisChristine MitchellRadkeySeattle Live MusicSeattle Music HappeningsThe Neptune TheaterThink No Think
← Previous Story SMI New Music Preview: The Hunger Games Catching Fire soundtrack
Next Story → SMI New Music Preview:’Magic Hour by Luscious Jackson