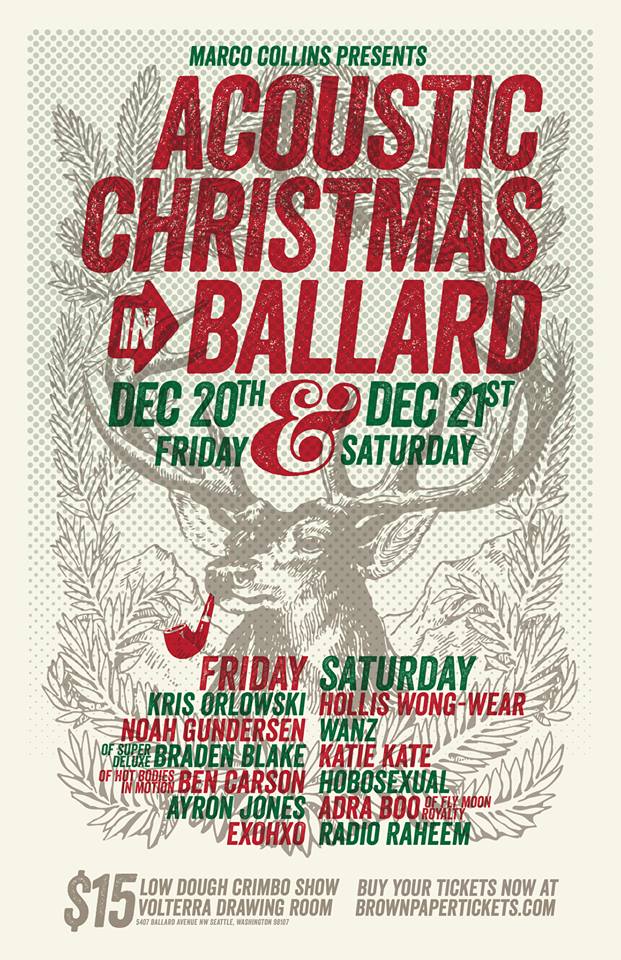 Christmas is almost upon us and the weekend prior to one of America’s grandest holidays, Rock and Roll Hall of Famer and longtime music curator Marco Collins is giving Emerald City music lovers an early Christmas present – two nights of brilliant music featuring some of the best and brightest talent that the Northwest has to offer (See lineups below).

Next Friday at 8:00pm (12/20) and Saturday (12/21), Marco will present Acoustic Christmas in Ballard which will take place at Volterra Drawing Room. It will be an intimate evening celebrating great music and community, hosted by one of the region’s most passionate champions of Seattle music.

Sounds like a pretty nice way to usher in the holidays and a pretty sweet bang for the buck, pre-Christmas stocking stuffer.

You can purchase tickets HERE

Doors open at 7pm and show begins at 8pm and is all-ages. Attendance is limed to 125 guests. CASH BAR WITH ID.

Before the advent of the internet, MP3 players, iTunes, Pandora, Rhapsody, Spotify, Napster, and all the rest… radio was the de facto delivery system for bringing the latest and greatest music to the masses and breaking emerging artists. If radio was the vehicle, then it was the DJ who was the driver, and no one epitomized the model more than Seattle’s very own Marco Collins.

Marco was DJ, assistant program director, and music director at 107.7 The End during the 90′s and helped introduce the world to bands like Pearl Jam, Alice In Chains, Soundgarden and Nirvana. The new Seattle sound became known as “grunge.” Record companies, sensing there was gold in them there Northwest hills, sent armies of A&R reps to sign the next big Seattle act and cash in. You can read more about Marco here.

Not only is he a multi-media journalist, he is also an accomplished musician. He is the founder of SMI and drives the creative look, feel and branding for the publication. His years of writing, arranging, and performing live music in a variety of genres inform his ability to communicate the message and the mechanics of music. Roth’s work on SMI reflects his philosophy that music is the universal language, and builds community. He believes it has the power to unite people of every race, religion, gender, and persuasion.
Related ItemsAdra BooAyron JonesBen CarsonEXOHXDFly Moon RoyaltyHobosexualHollis Wong-WearHot Bodies in MotionKatie KateKris OrlowskiMarco CollinsNoah GundersenRadio RaheemSeattle Music HappeningsWanz
← Previous Story SMI Radio / Critical Sun Sessions: Pete Hopkins (Artist Interview / Music)
Next Story → Seattle Living Room Show (12/14/13): Joseph, Austin Hartley-Leonard & St. Paul de Vence (Photos)