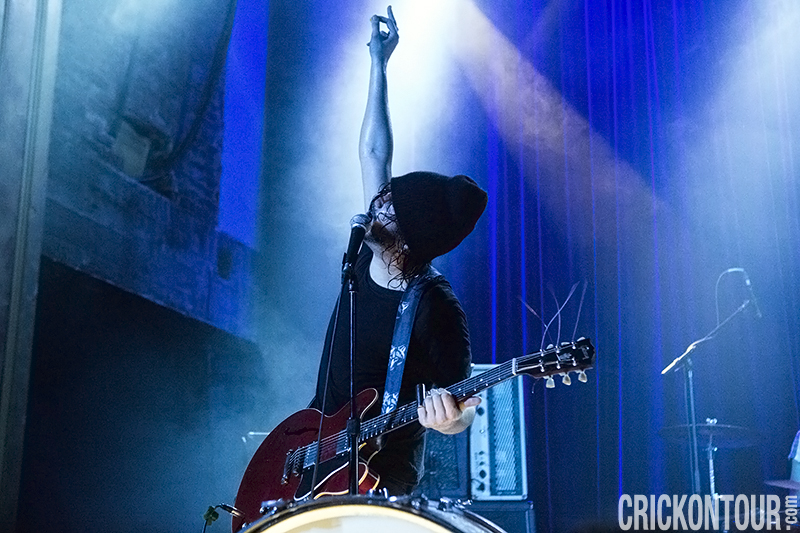 The temperature has dropped dramatically since I walked into Schultzy’s. I’ve just finished dinner with, what feels like, half of the Seattle music scene: Rock & Roll Hall of Fame DJ – Marco Collins, Fox & the Law front man and Neumos employee – Guy Keltner, and The Grizzled Mighty’s Ryan Granger and Whitney Petty, just to name a few. It’s a musical Last Supper and I feel like the rock journalist Judas. The parade of notable audience members continues for the rest of the night; everywhere I go, whether in-between sets or just walking to my car, I’m running into another big name. Everyone has come out of the woodworks tonight for the shared face-melting experience of Reignwolf, Ravenna Woods, and Hobosexual.

“If I’m late for this, they’re going to kill me.” Marco says as we hustle up the Ave towards Neptune Theatre.

It’s two minutes to nine and we’re rushing to the will call. Hobosexual just played at the “Acoustic Christmas in Ballard” concert series Marco coordinated last week at Volterra Drawing Room, but this is both his and my first time seeing the band’s electric performance. With all my presumptions based off their latest album, Hobosexual II[1], my expectations for the set would be completely satisfied. The Seattle-native rock duo’s affection for the metal giants of the late 60’s shines through instantaneously. Beyond the album-naming tendencies of Led Zeppelin[2], lead-singer and guitarist, Ben Harwood’s talents fall somewhere between the blues guitar of Mississippi Fred McDowell and the vocal shrieks of Ozzy Osbourne. Sure, you can lump them in with the Black Keys if you narrowly view them as just two guys playing blues-rock, but Hobosexual cozies up better betwixt AC/DC and Deep Purple than alongside the White Stripes.

Marco catches on camera what may be the highlight of the show: the one-man mosh pit next to us erupting during “Concrete Corporate” – a perfect example of the overwhelming energy in the audience. By the end of the set, our enthusiastic friend and a few late-bloomers have formed a Hadron Collider with their elastic bodies. Near the stage, one protective father is facing away from the band, directly towards our bouncing friends, using his best cross-armed Charles Bronson stare to keep his daughter from being trampled.

The duo rocks hard yet remains humble. Before closing, Harwood turns to drummer Jeff Silva, “I think this is the greatest moment of my life.”[3] Finishing their last 6 minute-plus song filled with Southern rock jamming and Bonham triplets, the band exits to “12th Mannish” applause for what is most assuredly their best show yet.

Hobosexual leaves the stage with “Ramble On” pumping out the speakers as our moshing friends attempt to calm down. The room has reached 107 degrees and we decide to step outside for some air. Now, full disclosure: here comes the part where I missed Ravenna Woods. The whole thing. I could try to con you with some half-ass review based off YouTube clips[4] but what’s the point? Yes, I can’t very well review something I didn’t see. Greg Roth did capture one of their shows with Deep Sea Diver about a year and a half back. You can get his take on the band by clicking the below link.

For weeks, friends of mine[5] have said they couldn’t understand why Ravenna Woods had been added to the bill. I’m told it may have been to help sell concert tickets following the release of their 2013 album “The Jackals” – Reignwolf didn’t seem to need the help; Reignwolf and company just played four consecutive sold out shows this week. The show became both an emotional and physical roller-coaster. Get amped up and sweaty! Now calm down and become overly aware of your posture. You asleep? Great! Now let’s rock!

Jordan Cook, a.k.a. Reignwolf, has an impressive resume. His one-man band[6] has just come off a tour with the Pixies and will be joining Black Sabbath on their 2014 Canadian tour. Amongst these professional rockers must be a comfortable place to call home. Although lyrically complex his songs are not, I doubt anyone in the audience actually cares. His guitar speaks above all else. Cook’s technique is among the top of his class, arguably on par with the likes of Gary Clark Jr. Armed with only his amp and a kick drum, Reignwolf finds a way to fill the spaces and keep the songs fluid. It’s some real heavy metal thunder.

Cook reminds me of the guy at Guitar Center who has just learned “Smoke on the Water” and has to make sure they can hear him in the parking lot. Except tonight, everyone genuinely wants to hear him play. Hair flies everywhere as a sea of heads falls forward and back with each beat. The entire premise of his performance is intriguing, in that stylistically the closest comparison is a folk singer-songwriter moaning ballads with an acoustic guitar. Yet Cook’s results are the farthest thing from the Newport Folk Festival. It almost feels as though he’s challenging the established rock scene. The cool thing right now is rock duos? That’s boring, I’ll just do it all myself.

Reignwolf’s performance can be described in two words: technical difficulties. Whether pausing for two minutes to switch and tune guitars, or dragging solos out to noticeably uncomfortable lengths so some wiring can be fixed, every song seems plagued by mishap. I don’t blame it on Cook; rather it falls on the shoulders of STG and his management. If you’ve got a headlining act that’s about to go on tour with the fathers of metal, the least you could do is hire him a decent roadie crew. During “In the Dark” – Reignwolf’s latest single – a stage hand kneels at Cook’s side for most of the song, trying to fix one of his guitar pedals. By the end of the song, he is right in the tech’s face, shouting the unintentionally fitting lyrics, “Why’s it got to be so hard?”

As the show progresses, it doesn’t get any better. It has basically become Spinal Tap’s “Rock & Roll Creation”. The bass cable doesn’t seem to be working, so while the same tech runs on and off the stage trying to find a replacement, Cook powers through alone. He stands at the front of the crowd, weakly strumming as his frustration grows. “I’m waiting too!” he jokes to the audience. Irritated, he touches his guitar to the microphone and sparks fly out into the crowd. He does it again. The crowd shrieks, then roars with approval. If you can’t give the people music, give them explosions.

Though nothing short of high energy, the performance lacks versatility. Every song is another fuzzed-up solo featuring the same wailing vocals, but I’d rather listen to this any day than most of the other bands being hailed by Rolling Stone. Even though the difference between songs becomes blurred as each spills into the next, it’s an entertaining show nonetheless. Reignwolf may be a one-trick pony but at least it’s a good trick.

Next week on SMI Radio you can hear Greg Roth’s conversation with Jordan Cook AKA Reignwolf. 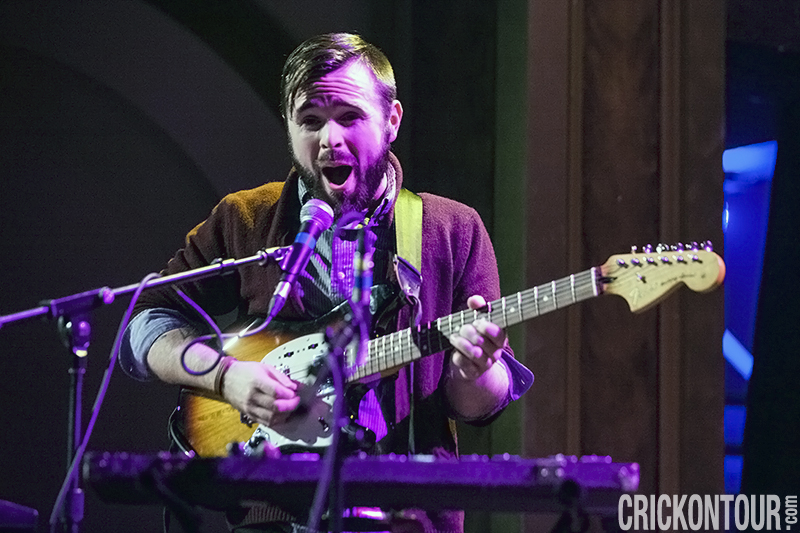 [2] Will their fourth album be Untitled? Four cryptic symbols with “Hobo” scrolled out in the middle?

[3] Closely following my favorite quote of the night: “Jeff, my pants are too tight…”

[6] With the occasional supporting bassist and drummer.

THE REIGN POURS DOWN ON SASQUATCH (PHOTOS)

Ian Cunningham is often described as either an old-soul or the most crotchety twenty-something you’ll ever meet (depending on the source), Ian holds a critical eye for modern music. Idolizing Keith Richards, Warren Zevon, and Lester Bangs, his musical preferences thrive decades prior to those of his peers. Raised in Portland, OR, he moved to Seattle in 2012 to continue drumming for the indie surf band Faire du Surf as well as to pursue an English degree from the University of Washington. Though the band has since dissolved, he is the current drummer and manager for The Mama Rags. In what little free time he has, Ian is a die-hard Seahawks fan and an avid record collector; his favorite album being Those Shocking Shaking Days. This October, he will be the proud father of a baby boy.
Related ItemsAlex CrickHobosexualIan CunninghamJordan CookMarco CollinsRavenna WoodsReignWolfSeattle Live MusicSeattle Music HappeningsThe Grizzled MightyThe Neptune
← Previous Story SMI Musical Highlights of 2013 (Photo Slideshow)
Next Story → SMI Radio Ep. 96 On Demand: Eldridge Gravy & Kevin Sur (Timberrr! 2014)