By Alicia Kamenick on January 9, 2014@corianderstem 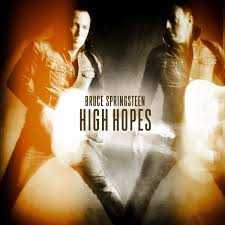 The last time Bruce Springsteen released an album hot on the heels of a world tour, we got Working On a Dream, which was … well, a mixed bag, to be generous.  So when Bruce announced a new album last fall as the Wrecking Ball tour was winding down, there was a dose of skepticism in the response.

Thankfully, High Hopes is worlds better than Dream.  The album is a collection of previously unrecorded songs, studio versions of live tracks, and almost a duet album with Rage Against the Machine’s Tom Morello, who has been a frequent E Street Band concert guest star.

The album manages to feel like a continuation of 2012’s Wrecking Ball, with its mix of rollicking arena pleasers like the title track, and somber character tales like the Vietnam vet tale “The Wall.”

Morello plays on eight of the twelve tracks, and their cover of 1995’s The Ghost of Tom Joad is given a welcome album release (after having only been previously available as an iTunes download).

I’m not sure if Springsteen ever even rests. But if he’s going to continue to churn out music and keep the tours rolling, at least he’s churning out quality music, and that gives him the excuse to keep touring, which is really what it comes down to for his fans.

Alicia is a Midwest transplant who loves Seattle but misses thunderstorms. Her musical obsessions began when her coolest aunt gave her a copy of K-Tel’s Rock 80 album for Christmas when she was 7. She spent many years studying piano and voice, but the force of rock and roll won, so while she still sings in a local chorale, her true musical passions lie more with The Beatles than with Beethoven. When she’s not working at her job in HR, she can be found singing bad pop songs at the top of her lungs … although sometimes she does that
Related ItemsAlicia KamenickBruce SpringsteenNew Music PreviewNewsRage Against The MachineTom Morello
← Previous Story Time on my Turntable 2013
Next Story → Reverend Horton Heat burns up Showbox (Photos)