Brent Amaker truly is the one at Neumos (Photo Slideshow) 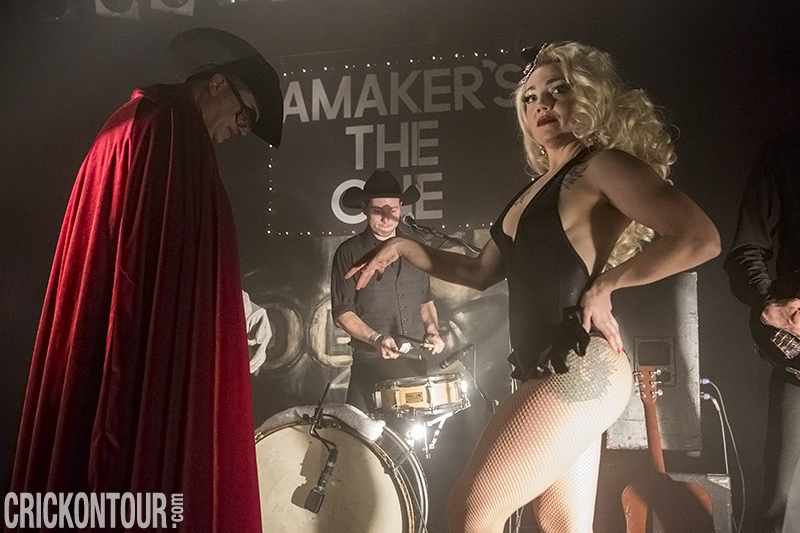 Anyone that goes to a Brent Amaker and The Rodeo show know that they are going to get more than just a music concert. Amaker and his band combine elements of Broadway, Vegas, and Vaudeville to drive their musical point home. Last Thursday night’s performance at Neumos was part performance art, with a hint of kitsch and burlesque thrown in the mix.

Brent is well known and well liked in these parts. His shows are unique events that bring out a lot of cats who are no strangers to the music community. KEXP DJ and the Young Evil himself, Troy Nelson was on hand for the show. His lovely fiancé Mackenzie Mercer (also in The Young Evils) sporting a new tattoo, was right up front digging The Rodeo. Her father and legendary rock photographer Lance Mercer was also in attendance snapping away with his point and shoot. Also at the show, was Rock and Roll Hall of Fame DJ, Marco Collins, as well as Seattle music journalist mainstay, Gene Stout. They, along with throngs of  friends, family and fans were clearly enjoying the night – which closed out the week-plus long celebration of Moe 20 / Neumos 10.

Amaker’s show paid homage to an pure American art form, and unique brand of pop culture. The band owes as much of their sound to the likes of Devo, Kraftwerk, and Bowie as they do to Willie Nelson and Johnny Cash. If they would have been around they would have been the official house band for every  Clint Eastwood spaghetti western or Sam Elliot fronted country flick. Moreover, if Quentin Tarantino does another western he needs to hire Brent and The Rodeo.

At the beginning of the show a lighted sign was hoisted above the stage which clearly stated: “Amaker’s The One” This was a proper statement because the fact is that Mr. Amaker is an American original and a Northwest music treasure.

Decked out in matching black cowboy outfits, Brent Amaker and his Rodeo once again showed that behind the quirk and fun they’re a solid musical outfit. The band is comprised of Bryan Crawford (drums), Cinderella (bass), Ben Strehle (guitar), Tiny Dancer (guitar) and Jaques Willis (vibes and percussion).

As he does at the beginning of all his shows, Amaker sauntered out on stage donning his customary red cape and accompanied by his vivacious valet Bunny (Atomic Bombshells), who was decked out in naughty nun regalia.  Bunny took off Amaker’s cape, held his 10 gallon hat, while the man strapped on his ax and welcomed the masses to The Rodeo.

Amaker and his gang took fans on a frolicking ride through their roots-country and hillbilly cow-punk catalogue, which included some new numbers from the group’s most recent effort, Country Sky. (available on iTunes)

With tongue firmly planted in cheek, Brent and the boys know how to bring the fun paired with irony – while at the same time, putting together an engaging, sonically compelling  and visually entertaining musical product.

Brent Amaker showed the Neumos crowd once again that he IS the one indeed! (Check out some of the photos from the show below, courtesy of Alex Crick.)

Prior to the Brent Amaker and The Rodeo set, The Mama Rags and Fox and The Law respectively performed a couple of high energy and gritty, roots / rock sets.

Alex Crick is a Seattle based freelance photographer specializing in music photography. His interest in photography began as a school project in the early-90′s, when he also attended many live music shows. Eventually, he combined these two interests by conveying the power and excitement of live music through the eye of the camera. Over the years, he’s traveled all over the country photographing live musical acts. You can find samples of his work in SPIN, Billboard, Esquire. View his work here
Related ItemsAlex CrickBrent Amaker and The RodeoFox and The LawGene StoutGreg RothMarco CollinsSeattle Music HappeningsThe Mama RagsTroy Nelson
← Previous Story Surprise! Foster The People take over The Crocodile (Photo Slideshow)
Next Story → Jonny Lang just gets better with age (Photo Slideshow)