Looking back on the Sasquatch! 2014 Launch Party (Photo Slideshow)

By Christine Mitchell on February 5, 2014@Housetornado37 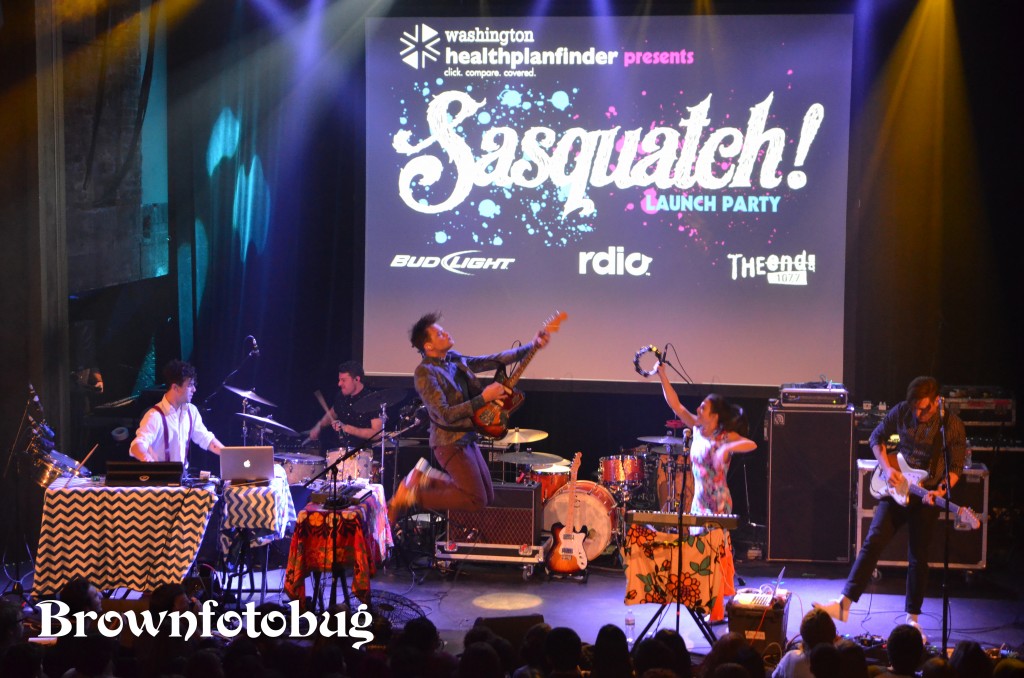 At last, the eagerly expected Sasquatch! Festival Launch Party arrived. The soiree took place last week. Now that the festival is spanning two long weekends (Memorial and Fourth of July) and on the heels of last year’s lightning-fast ticket sellout, contest winners and other lucky people filed into The Neptune Theatre for a preview dose of music and first knowledge of the 2014 lineup.

First things first: this show was freezing, although by now I have come to expect The Neptune to have its central heating permanently shut off. Is it broken? Are the owners miserly? Anyhow, I felt sorry for all of the people who had arrived without their jackets thinking they’d warm up inside. Luckily they were handing out free launch party t-shirts (short sleeve) and cheeseburgers (Dick’s). Beautifully screened gig posters were also a gimme, although there was a goony photobooth ritual to go through to get one (thanks, Washington Health Plan Finder). Pretty swank for a free show!

Pete and Derek from The Cave Singers laid down a set of brand spanking new material. While the guitar work was interesting and had a sound of its own, the songs themselves were fairly slow-paced and sleepy. It was the chill pervading the room that kept me awake until Pete and Derek showed a pulse and their second to last song showcased a propelling, basic beat that added much-needed depth.

Los Angeles’ Sir Sly brought relief and warmed the place up a few degrees with a thumpy, sexy bunch of rock tunes that featured a very talented drummer, extra drumming and percussion galore by the guitarist and keyboardist, and a slew of electronic effects. Singer Landon Jacobs has slippery dancing feet and some knob-tweaking abilities to boot. From this point on, it became evident that to be in these bands, you needed to be able to play more than one instrument. Sir Sly was well-received by the crowd, and I expect that we’ll be hearing more about this band in the near future. They sounded good and seemed to have a veteran stage presence.

St. Lucia ushered a welcome (if imaginary) tropical ocean breeze into The Neptune as they joyously performed their brand of infectious, straight-outta-1985-tinged pop. Their sound contains echoes of Wham!, Miami Sound Machine, Billy Ocean, and a healthy dose of Erasure . . . all blenderized through an Apple MacBook. Lead singer and St. Lucia mastermind Jean-Philip Grobler has a powerful, classically-trained voice, excellent jump moves, and a wardrobe to rival Don Johnson during his Miami Vice days. You’d almost feel embarrassed about liking this music if it weren’t so darn catchy. Natty blazer and fan-blown hair aside, St. Lucia had an uplifting performance that made people dance, the song ‘Closer Than This’ encapsulating the band’s set well.

Following St. Lucia’s set was the much anticipated reveal of the 2014 lineup. Here is the trailer that debuted at this point of the Launch Party:
http://www.sasquatchfestival.com/trailer

Much screaming and gabble ensued (“OUTKAST!!! VIOLENT FEMMES!!! SOUNDGARDEN!!!”). Once things calmed down a notch, Cold War Kids took the stage. With a heavy rock sound (think Zeppelin-esque riffs) complemented with piano, keys, and electronica, the band erased St. Lucia’s Brooklyn-hipster vibe and replaced it with something more serious and dark. ‘Hang Me Up To Dry’ was met with a roar of approval; Cold War Kids was all about the business of rocking out and rocking the crowd, and nobody left disappointed in that column. Check! 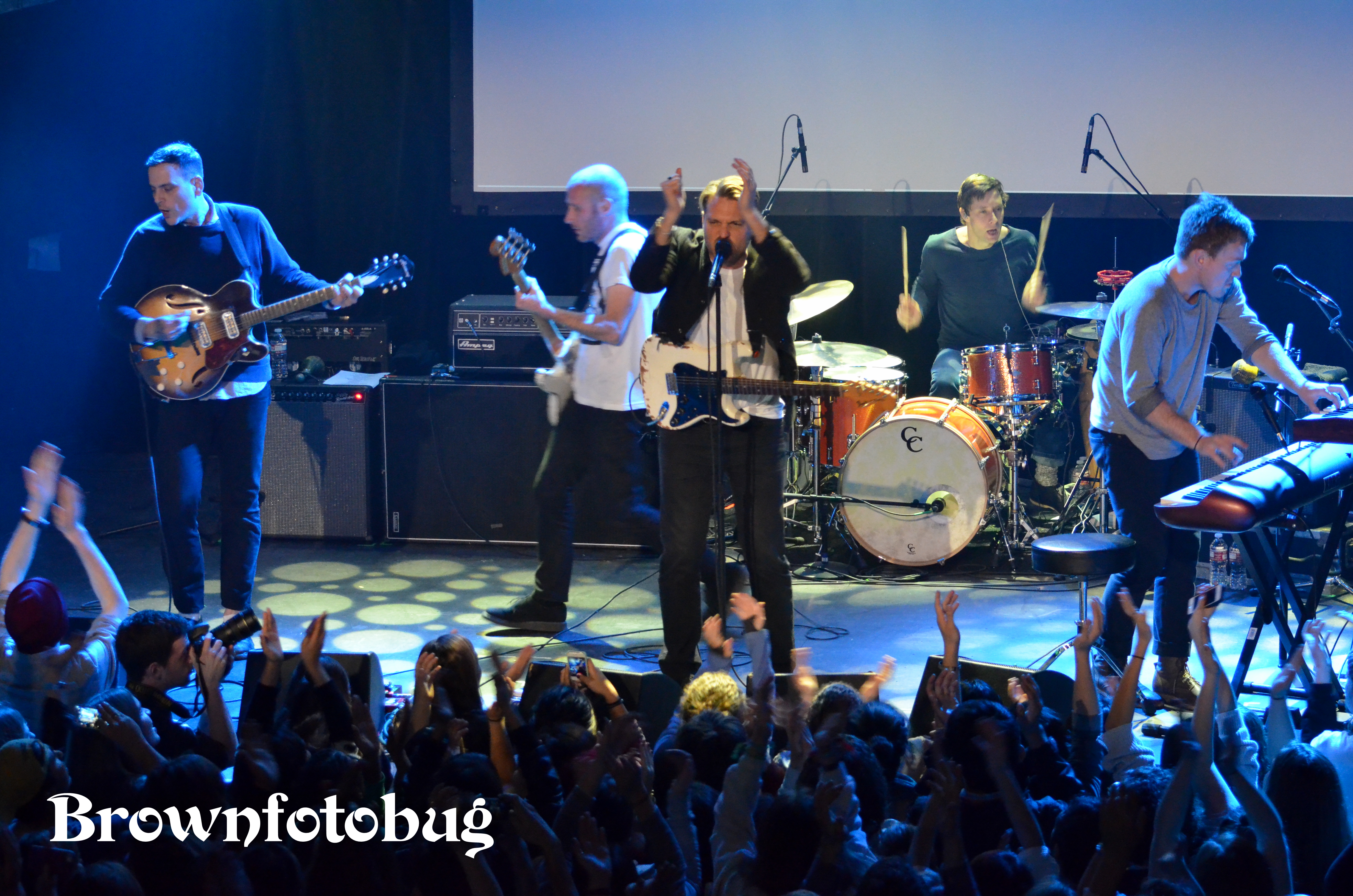 Christine Mitchell has been poring over album liner notes pretty much since she acquired the skill of reading, and figured out the basic structure of rock songs at an early age. Whether it’s the needle popping into the first groove of the record, the beeps that signal the beginning (or end) of a cassette tape, or digital numbers ticking off the seconds from zero, music brings Christine happiness, ponderous thought, opportunities for almost scientific study, and sometimes a few tears. When she started attending live shows two decades ago, a whole new piece of the puzzle clicked in and she has been hooked ever since.
Related ItemsCold War KidsFestivalsSasquatch! Music FestivalSeattle Music HappeningsSir SlySt. LuciaThe Cave SingersThe Neptune Theatre
← Previous Story YACHT sails into The Tractor (Photo Slideshow)
Next Story → Mayer Hawthorne plays yet another sold out show in Seattle (Photo Slideshow)