By Jessica Kaminski on February 13, 2014@jerkaminski 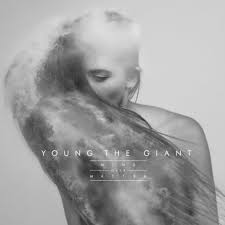 When a label touts an album as “highly anticipated” I am always a little skeptical, as was the case with Young The Giant’s sophomore album Mind Over Matter. “Highly anticipated” is almost as disingenuous as “hardest working band in *fill in the genre*. Regardless of their label’s claims of anticipation, Young The Giant delivered a collection of songs that are catchy, vibrant, and full of energy.

The album opens with Slow Dive a 48 second instrumental that crescendo into “Anagram”.  Anagram sets the tone for the next 6 songs with upbeat melodies, punchy drums and plethora of textural sounds.

Track 7 marks the band’s shift into a more introspective space with “Firelight”. The song meanders along carried by an acoustic guitar that beautifully compliments Sameer Gadhia’s vocals.

The stand out track for me was “Camera”. It opens with organ and vocals laden with reverb that give the impression of a public confession in an empty cathedral. The song then liquefies into synthy layers of fuzz and ethereal textures that build into beautiful strata echoing, “I could be happier”.

At times Mind Over Matter feels a bit disconnected, but overall the album is a charismatic exploration of the dichotomy between internal struggles and external forces. The album has all the right pieces and sounds superb (props to the engineers), but it’s missing the kind of cathartic moments that will keep it at the top of my playlist 10 months from now.

There are some albums that just feel like soundtracks—this is one of them. It is the kind of album that on its own might not make it to the “all time favorite list”, but set to pivotal life moments it could be the album that captures that one perfect summer.

Raised in central Wisconsin, I felt like I had found home when I moved to Seattle in 2006. I was immediately captivated by the local music community and love discovering new and old music by the talented artists in the PNW. I also really really like baby goats and am a sucker for cheese.
Related ItemsJessica KaminskiMind Over MatterNew Music PreviewNewsYoung The Giant
← Previous Story Toad The Wet Sprocket: ’90s Nostalgia at Showbox @ The Market (Photo Slideshow)
Next Story → My Goodness and The Raw Power of Augustines (Photo Slideshows)