By Jessica Kaminski on March 12, 2014@jerkaminski 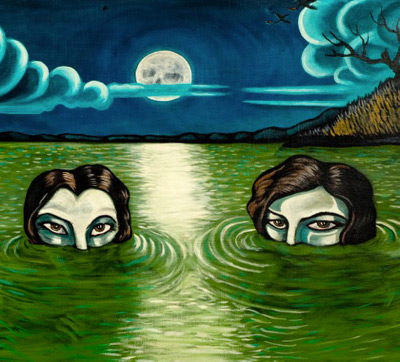 English Oceans is the twelfth installment in the prolific Drive-By Truckers’ catalog and is a straightforward country rock album.  The band is solid and in sync, the songs have sturdy arrangements, but the album doesn’t pull any punches.

While the lyrics teeter on the verge of being overly elementary, they are poetic and endearing in their simplicity. The vocals on English Oceans occasionally wander off key, but in this instance is serves to add to the rustic charm of Drive-By Truckers.

The album has an overwhelming consistency in the tone and pace of the songs. The majority of the instrumentation is relatively basic, and the guitar solos are tastefully executed and not overdone. The keys add a spacey ambiance to some of the tracks that provides nice punctuation and separation in the sound.

This album elucidates the magic of people, playing music, in a room; no tricks, no studio magic, just five musicians crafting songs that they love. If the band’s goal was to create a studio album that captures the energy and sound of a live performance, then they succeeded.  The album sounds like each song was recorded in a single live take, no overdubs, just the music as it was performed.  The honesty of this approach is refreshing, but the overall listen-ability of the album would have been better had it been a bit more polished.

English Oceans does a fantastic job of illustrating the musical prowess of Drive-By Truckers. The album is tight and thick without getting messy, and embodies quintessential Southern rock. This is a band that should be seen live to appreciate the full power of their songs.  They may not be fancy, or ground breaking, but Drive-By Truckers know how to serve up a healthy dose of upbeat rock, seasoned with gritty country.

Raised in central Wisconsin, I felt like I had found home when I moved to Seattle in 2006. I was immediately captivated by the local music community and love discovering new and old music by the talented artists in the PNW. I also really really like baby goats and am a sucker for cheese.
Related ItemsDrive By TruckersEnglish OceansJessica KaminskiNew MusicNew Music PreviewSeattle Music Happenings
← Previous Story SMI New Music Preview: ScHoolboy Q ‘Oxymoron’
Next Story → SMI New Music Preview: Elbow – “The Take Off and Landing of Everything”