By Katrina Charles on March 16, 2014@Katrina_Charles 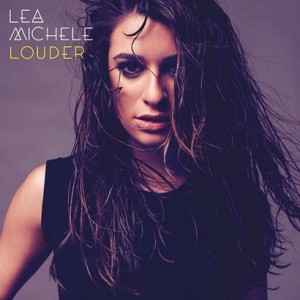 When Glee began airing on Fox in 2009, everyone was stunned by the powerful vocals of fairly unknown actress Lea Michele. With a knack for melding theatrics and popular music, she was a key element in the show’s success and the main reason their version of “Don’t Stop Believing” was on repeat in my car. Though I grew out of Glee by the second season, I’ve remained a fan of Michele,  and was excited to hear her solo debut Louder. Unfortunately, it’s not the moving, bold break-out it promised to be.

If you are aware of  the events in Michele’s life this past year, you’re really rooting for this girl. The shocking death of her boyfriend and Glee cast mate Cory Monteith was a tragedy no one saw coming, and the legions of heartbroken fans waited to see how Michele would handle it. A brave speech she gave at the Teen Choice Awards brought some closure and optimism to a bleak situation, and it was apparent that Michele, though grieving, would emerge with the strength and grace we’ve come to expect from the young actress. It seemed that her impending album would be the perfect next step in healing for the artist and her fans.

In retrospect, approaching the album with these expectations may have been unfair, but Louder lacks sincerity to the point where I liken it to a fake Christmas tree when I wanted a forest. It is full of plastic songs, reminiscent of early 2000s Celine Dion (no offense to Celine Dion) with lyrics that float buoyantly on the surface of anything meaningful. Promising lines quickly rush into the next repetitive chorus, giving you hope, and then deflating it as quickly as possible. It’s empty, boring, and disappointing. Even the Rihanna-esque beats couldn’t give this album a sustaining pulse.

Perhaps I’m being too harsh. For the first minute, it’s really not that bad. Her single. “Cannonball” is the intro track, leading off with an interesting beat and a cool piano riff.  It’s catchy and enjoyable, at least until you realize that she’s just repeating the words over and over and over. And over. On a side note, I highly recommend this album to those learning English as a second language. It has the repetition of an expensive language-learning program for a fraction of the cost.

“If You Say So” should have been the redemption. Admittedly, about the last words she shared with Cory Monteith, the meaning is already there. You don’t have to do a lot when there’s that much weight behind a song, but it seems the safe road was taken once again and the meaning fell flat. Let’s dissect.

My heart hurts for you, Lea. Let’s go to the chorus.

Okay . . .  I have a grasp on the timeline, and that’s not very creative rhyming, but fine. I can tell you’re getting to something, right?

Okay, I give up.The next lines are actually sweet (“You said I love you girl, I said I love you more”). Too bad I stopped paying attention because I was tired of hearing about the seven rotations of the earth. You know, the 1/52nd of a year that occurred. Did you catch that part? I sure did. Seven whole times.

Though it may not seem like it, I really am rooting for this girl. She’s a talent, she’s been through a lot, and she deserves a win. But this isn’t it. It’s tough being in the public eye when you have a lot of people to please, but I question whether she’s making herself happy with this project. Perhaps it was too soon or too edited, but this is not her best effort. However, next time might be. She’s still got the talent, the ambition, and the support to come out swinging in the future. As for Louder, we’ll just wait for it to quiet down and forget it ever happened. Until then, you can listen to her song “Cannonball”. It’s enjoyable if you don’t listen to the lyrics.