By Christine Mitchell on March 25, 2014@Housetornado37 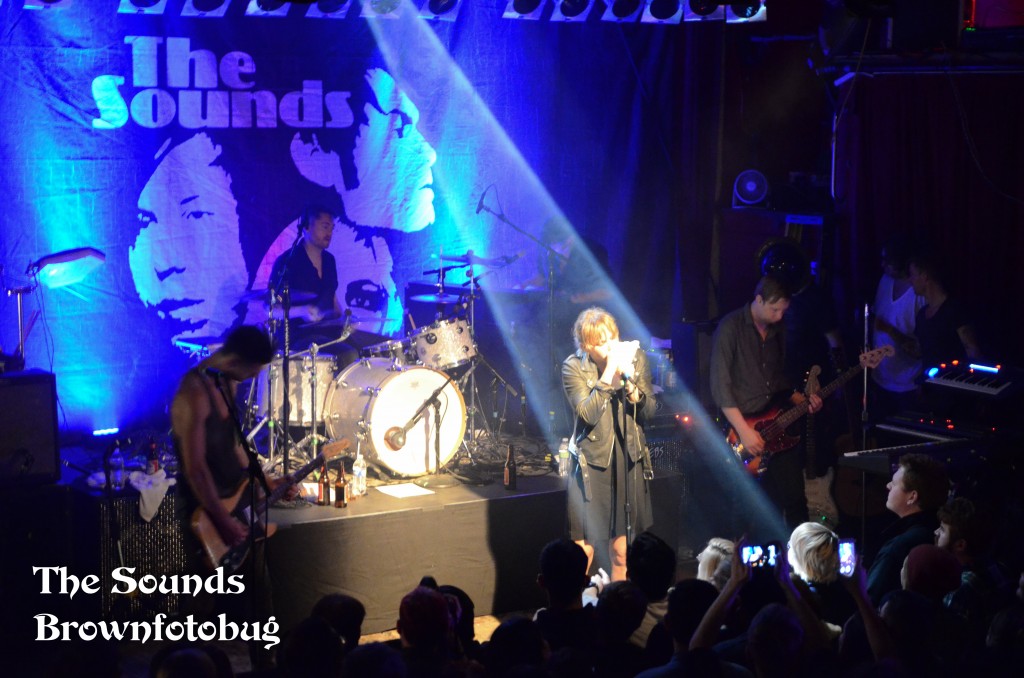 The Sounds Live at Neumos Photo by Arlene Brown

It was an all-ages Wednesday night at Neumos, and things seemed topsy-turvy as the 21+ crowd filled up downstairs and the underagers were relegated to the upper floor and balcony. Arlene and I were upstairs with the water-sippers, and at times I wished that we were right on stage, because The Sounds’ Maja Ivarsson has an incredible give and take with the crowd. But our bird’s eye view allowed me to take it all in, plus…all of the younger set upstairs got a rock ‘n’ roll view of Ivarsson’s heinie. And I don’t say that in a sensational way (although it is). I want you to understand that when it comes to punk rock ethics, Maja Ivarsson ought to be some sort of ambassador, or something similar to that. She belongs at Iggy Pop’s feet…probably doing something questionable to them.

The guys playing the instruments in The Sounds are just that, although I’m sorry to say it. They do a fine job. Drummer Fredrik Blond kept the strut-worthy beats coming all night, crisply and succinctly. Jesper Anderberg fluidly switched between keyboards, piano, and guitar, often within the same song. Guitar and bass? Covered. The Sounds’ songs (which apparently, interestingly enough, are written by the guys and not Ivarsson, including the lyrics) are straightforward rocking punk with a slight dance edge. At times the set felt a little repetitious, but my misgivings about that were drowned out by my fascination with the lead singer. Maja Ivarsson is just such a fantastic disaster of a train wreck…my new hero.

After an amusing delay, during which a smoke machine kept barfing and barfing until it was thick and hazy throughout the venue, The Sounds came on and Maja was carrying a beer and a whiskey. She proceeded to down those prodigiously, not forgetting to connect with the crowd by grinding her groin into someone’s head. “Ok…” I thought to myself. “This is going to be interesting.” After pretending to eat and blow the smoke (still being made) on stage, she proclaimed that she would “smoke anything.” So…of course a joint was passed to her. And by golly she lit it up and got halfway through the thing before the bouncers made her put it out (which she did very theatrically). Maja spit on the crowd, Maja made someone suck the microphone as it dangled between her legs. Maja was wearing a rather short dress, which she repeatedly hiked up and tugged on (quite the prop!). Maja, Maja, Maja! Feisty little Maja had more to drink, and drank her bandmates’ beers as well. Yet she stayed on point for the most part, singing and growling her way through songs like the ever-favorite ‘Living In America’ and ‘Painted By Numbers’. New tracks from the band’s latest, Weekend, blended seamlessly into the set, the crowd singing along to ‘Shake Shake Shake’ and ‘Take It The Wrong Way’ like old friends. Maja repeatedly shared her love of Seattle (by the end pronounced ‘She-addle’, was it the Swedish accent or the whiskey showing?), and the night ended with her diving off the stage into the crowd and somehow getting turned upside-down, so that everyone had a view of the underpants that she had been continually teasing to show during the whole set.

Openers Blondfire and Strange Talk, while not so enthusiastic or intense as The Sounds, brought a bit more dimension to the show. Strange Talk in particular sounded very radio-friendly, and I bet you’ll be hearing them on The End very soon, if not already. The band hails from Australia, and align themselves with the likes of Phoenix and Passion Pit. The quartet plays the usual rock instruments, but each member also has his own little electronic playground, drummer included. This translates to keyboards, knobs, and dials that were endlessly being plonked on and tweaked.  Their album Cast Away comes out next month in the US, with the single “Young Hearts” leading the charge.

Blondfire were just okay. While you may hear a couple of their songs (‘Waves,’ ‘Young Heart’) on the radio, particularly Alt. Nation, lead singer Erica Driscoll’s voice lacks any real oomph live (it reminded me of Jewel, and I don’t like Jewel). She was wearing a leather jacket, but didn’t seem to have the attitude to back it up (“A sheep in wolf’s clothing,” thought I). The loud rock sound of the band drowned her out for the most part, in any case.

One last thing about The Sounds: Maja went through about five different microphones throughout the set. Maja was mad about it. I really, really liked Maja. 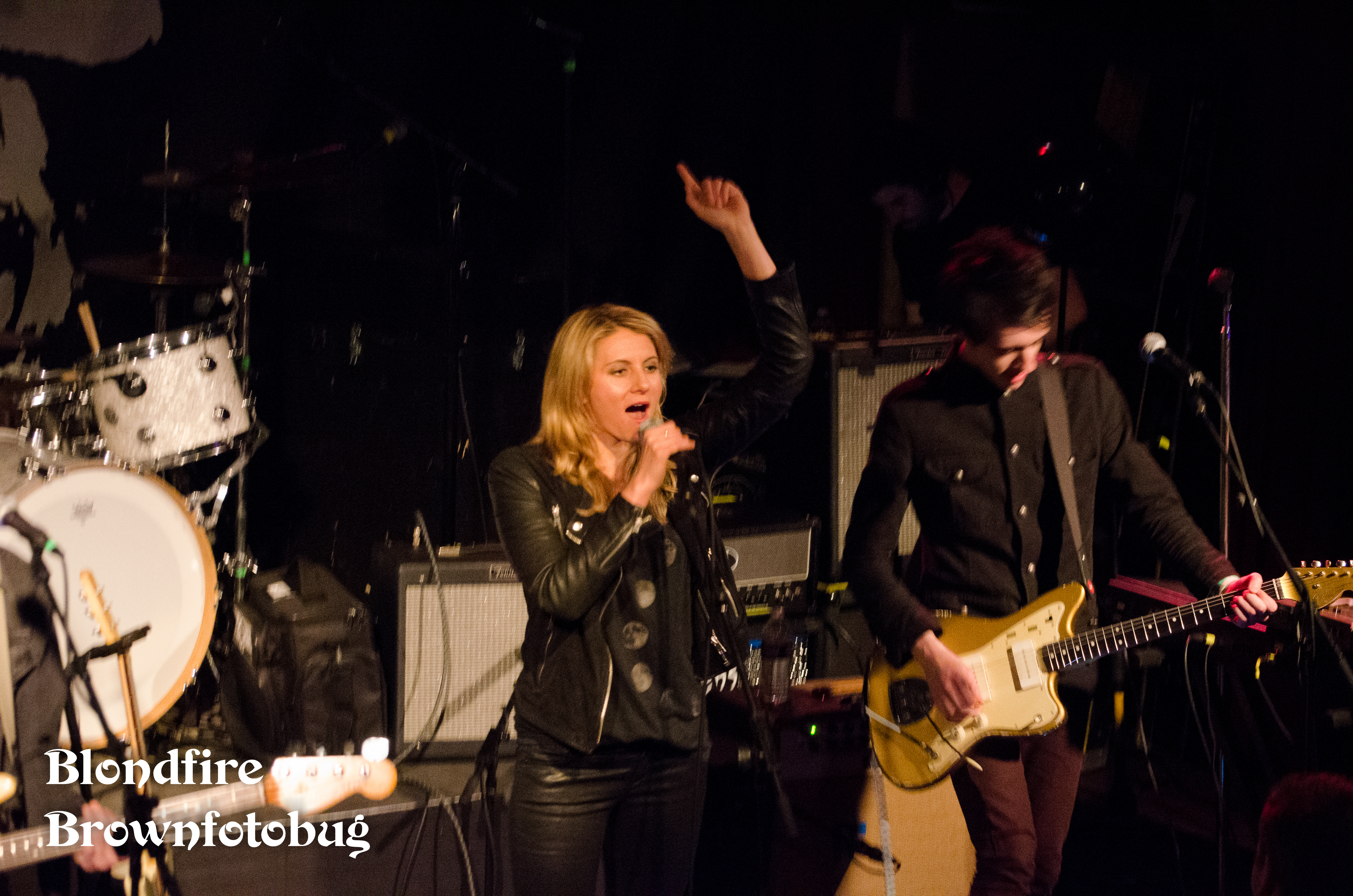 Christine Mitchell has been poring over album liner notes pretty much since she acquired the skill of reading, and figured out the basic structure of rock songs at an early age. Whether it’s the needle popping into the first groove of the record, the beeps that signal the beginning (or end) of a cassette tape, or digital numbers ticking off the seconds from zero, music brings Christine happiness, ponderous thought, opportunities for almost scientific study, and sometimes a few tears. When she started attending live shows two decades ago, a whole new piece of the puzzle clicked in and she has been hooked ever since.
Related ItemsArlene BrownBlondfireChristine MitchellNeumosSeattle Live MusicSeattle Music HappeningsStrange TalkThe Sounds
← Previous Story TOOL Melts Down Portland’s Moda Center… And Skips Seattle!
Next Story → The War On Drugs is coming to the Neptune!!!