Afghan Whigs Unleash Their Beast at The Showbox (Photo Slideshow) 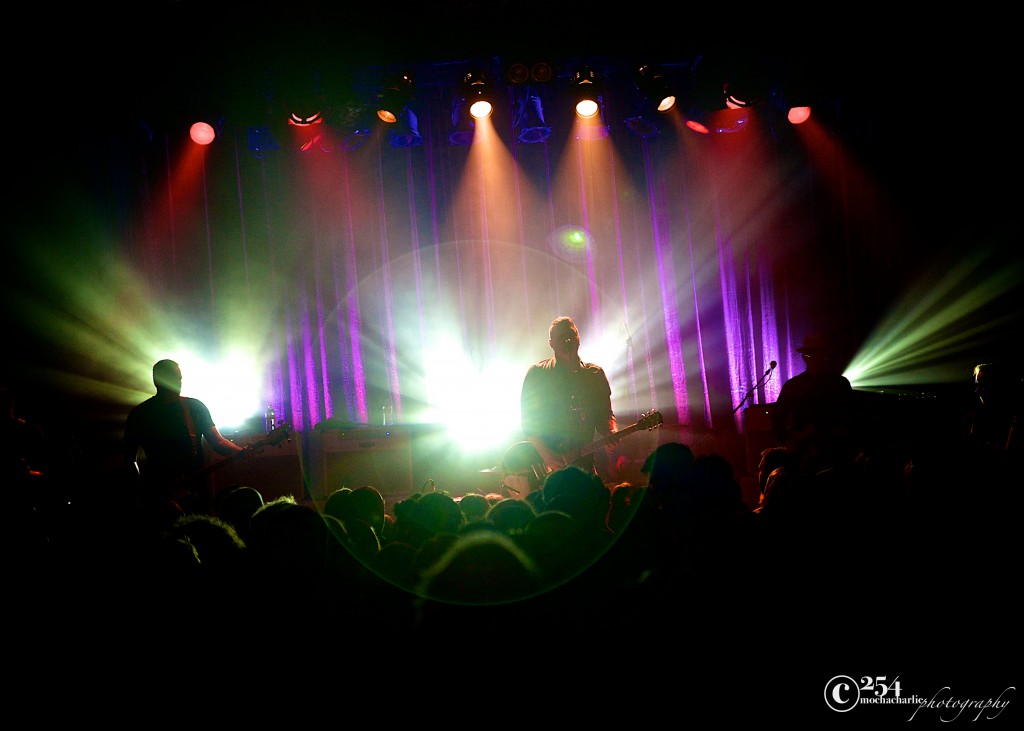 Afghan Whigs Live at The Showbox (Photo by Mocha Charlie)

Tax Day 2014 in Seattle was rainy and windy, and finding parking near the Showbox at the Market was a challenge. After twenty minutes of looping the area, I finally found a parking space four blocks from the venue. However, it was littered with broken window glass, and there was a young couple in the throes of an unbridled make-out session up against the bumper of the car in front of the space. How novel, I thought. Broken glass and passion could be the root of most Afghan Whigs songs.

The Showbox wasn’t sold out for the Whigs, but it was darned close. Their first new record in sixteen years, Do To The Beast (Sub Pop), was released on the day of the show, and the audience was Sub Pop-staff heavy. But this Cincinnati band has deep Seattle roots, mistakenly being lumped into the grunge movement when Sub Pop released their second album Up In It in 1990, and their third album Congregation in 1992.

I last saw the Afghan Whigs in 1993 when they toured to promote their breakthrough fourth album Gentleman (Elektra), at the Academy in New York. There, I witnessed one of my favorite concert moments: someone in the crowd tossed a half-full cup of beer at lead singer Greg Dulli while he was mid-song. The cup defied gravity and floated gently towards Dulli, and for a brief moment the cup rested perfectly on the head-stock of his guitar before toppling over onto the stage. Dulli stopped the song, and viciously pointed at the beer-tossing idiot, yelling “All right you motherfucker! I’m gonna kick your motherfucking ass if you keep on being a stupid asshole!!” And then he started laughing. It was as if his momentary rage dwindled unexpectedly with the realization of the band’s sudden success, and in the midst of the adulation from the crowd.

Thanks to NPR “streaming,” I was able to listen to the new disc numerous times prior to the Seattle show, and even though this isn’t an album review, I’m gonna say it’s the best thing they’ve done in years. Granted, I’m a fan, but the Whigs can be a little hit-or-miss, and Beast is definitely worth checking out.
The opening band, Early Winters, was already onstage as I entered. Lead singer Carina Round (originally from the UK) has quite a track record, having released three solo records with contributions from Brian Eno, Dave Stewart, and Billy Corgan. She also toured as a back-up singer with Tears for Fears, and Annie Lenox, and sang with Dulli’s other band – The Twilight Singers. Carina looked gorgeous in a black-and-white dress, her arms reaching to the sky occasionally as she sang. Carina and her band-mates; Zac Rae, Dan Burns, and Justin Rutledge, played somber yet beautiful pop songs with only guitars and keyboards. Their sound reminded me of the Cardigans, when the Cardigans do their relaxed/sincere thing. Heralding from L.A., Early Winters are often categorized as alt-country, but I really didn’t detect much country. The final song of their set, “Up In Arms” was lovingly haunting, and I’d like to see more of this band. Their latest record, Vanishing Act is available now.

Then came the roadies, carting violins and cellos as the smoke machines puffed away, mimicking the glory days of rock shows – when the audience could smoke whatever they wanted while waiting for the band to hit the stage, creating an organic ambiance that now needs to be created artificially. Red lights filtered through the haze as the Afghan Whigs took the stage. The current line-up consists of original members Dulli and bassist John Curley, guitarist Jon Skibic, multi-instrumentalist Rick Nelson, and drummer Cully Symington and guitarist Dave Rosser, who both played in the Dulli/Mark Lanegan project, The Gutter Twins.

Dulli hit the stage with swagger, clutching his Gibson with intent, and launched into the opening track from Beast, “Parked Outside.” The Whigs’ three-guitar attack accentuated the riff-heavy song, as Dulli attacked the mic with his inimitable, guttural howl. Keeping with the album sequence, their second song. “Matamoros,” was also the second song from the new record.

“How ya doin’, Showbox?!!” Dulli yelled before launching into the third song, “Fountain and Fairfax” from the Gentleman record. The crowd lifted a bit in recognition of one of the many gems from that record. Lyrics like “”Angel, come closer, so the stink of your lies sinks into my memory,” brought nostalgic smiles to many.

As they dove deeper into the set, the Whigs locked into a funky groove, with Cully attacking the drums with brutal panache, and Dulli spinning and dancing along with the band when he wasn’t busy spitting contradicting pleas of torment and lust.

After the sixth song, Dulli focused on a couple who had apparently been arguing directly in front of the stage since the beginning of the Whigs’ set. “What’s going on with you two?” he asked. “Are you guys gonna be able to work your shit out or what?” The couple said they’d be fine, but Dulli continued. “Listen, I’m not gonna be watching you guys all night. Draw a boundary. Don’t make me come down there. “ Then he told the young man to move to the other side of the room, and if he cooperated, he would sing a special song just for him. The crowd applauded Dulli’s method of defusing the situation.

The ferocious Whigs played a well-paced seventeen-song set, including eight of the ten songs from the new record, and a cover of “Heaven On Their Minds” from the Jesus Christ Superstar soundtrack. Dulli’s intro: “It’s the Tuesday before Jesus died! I’ll be playing the part of Judas on this selection.”

As they came back out for an encore, Dulli somberly announced, “Someone sent me a text today that said that Malcolm Young had suffered a bad stroke. I don’t know about you, but AC/DC was a huge influence on me when I was younger, and they’re a huge influence on me today.” Then, he dedicated the song “Faded” (from the Black Love record) to Young. In keeping with the theme, the Whigs launched into a cover of “Night Prowler” from AC/DC’s hallmark album, Highway to Hell. The band played the song note-for-note perfect, and Dulli did an amazing job channeling the late, great Bon Scott’s menacing cackle.

As Dulli and the Whigs approach their twenty-fifth anniversary, they’ve lost none of their confrontational intensity, drive, or purpose. Dulli is nearing the half-century mark, but he’s never slowed down, nor should he. Their performance at the Showbox and the material on their new album demonstrate that the Afghan Whigs are a force to be reckoned with. They should be considered a template for any young band looking to infuse their attitude-driven rock-and-roll with a large dose of sincerity and class.