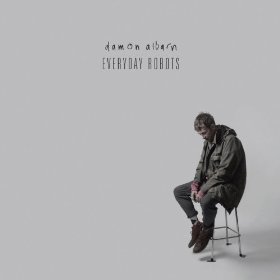 World, meet Damon Albarn. Chances are you already know and listen to his music even if you don’t recognize the name. He wears many musical masks and while his compositions are widely heard Damon Albarn the man, the name sits back obscured in the background. Albarn is the mastermind behind Blur and the most successful virtual cartoon group of all time, Gorillaz. He has also been involved in many additional collaborations over the years.

Now, at age 46, he has stripped away all the masks and released his first proper solo album. Everyday Robots (Warner Bros.) concerns itself with the modern world and the social alienation caused by the overuse of technology. The title track is about how we’re all robots glued to our phones. Albarn delivers the lyrics over piano and sparse strings. His other musical interests also shine through, especially his love of African melodies and choirs on “Mr. Tembo.” “Lonely Press Play” is about the comfort you can get from the companionship of a song. The music on most tracks consists of understated piano and electronic percussion. This isn’t Blur and this isn’t Gorillaz. It is Damon Albarn wearing his Damon Albarn mask for the first time in decades. If you like his earlier work, you’ll like this album.

Not only is he a multi-media journalist, he is also an accomplished musician. He is the founder of SMI and drives the creative look, feel and branding for the publication. His years of writing, arranging, and performing live music in a variety of genres inform his ability to communicate the message and the mechanics of music. Roth’s work on SMI reflects his philosophy that music is the universal language, and builds community. He believes it has the power to unite people of every race, religion, gender, and persuasion.
Related ItemsAlbum ReviewblurChris Senndamon albarneveryday robotsgorillaz
← Previous Story SMI Album Review: Eels ‘The Cautionary Tales of Mark Oliver Everett’
Next Story → Sean Lennon’s The GOASTT at the Crocodile May 22nd