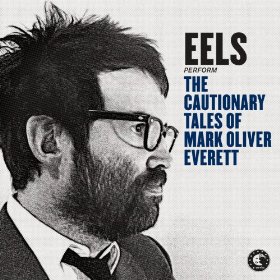 For over two decades now the music of Mark Oliver Everett (Mr. E) has served as the melancholy backbone of the alternative rock landscape. He’s been regaling us with tales of heartbreak and tragedy on every Eels album since the mid-nineties with impressive quality and consistency. The Cautionary Tales of Mark Oliver Everett (PIAS America) could be the title for an overview of his musical career. Instead that is the name of the new album by Eels, a decidedly stripped down acoustic affair that is unmistakably Eels but is rawer and lacks the production polish and musical shine of much of their earlier work.

The songs are as melodic and catchy as ever. That being said, the instrumental intro to the album, “Where I’m At,” is a near perfect piano and string piece. Other highlights include the low key “Agatha Chang,” the floating melody of “A Swallow in the Sun” and “Mistakes of My Youth.” The last song, to bookend the album, is “Where I’m Going.” It uses the music from the first track and adds lyrics. It’s another worthy release by E and his consistently revolving band members. Eels are playing the Moore Theatre on June 7.

Xander is a veteran freelance photojournalist and writer. He has covered many top national and local artists for multiple local and national publications including SMI. On his spare time, he's either producing episodes of VNYLden, or tending to his vinyl collection.
Related ItemsAlbum ReviewChris SenneelsMark Oliver EverettNewsSeattle Music Happenings
← Previous Story Coldplay Tones It Down … For Better Or Worse
Next Story → SMI Album Review: Damon Albarn ‘Everyday Robots’