Elbow edges their way up and through the Pacific Northwest

By Alicia Kamenick on May 29, 2014@corianderstem 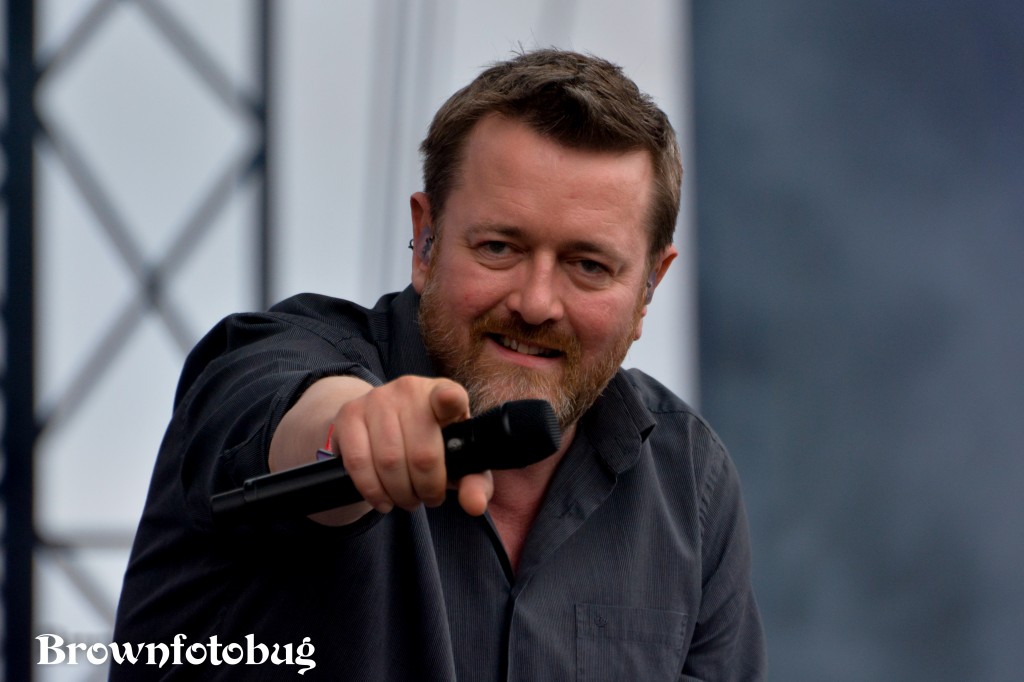 Guy Garvey of Elbow at SASQUATCH! 2014. Photo by Arlene Brown.

For those of you who may have read my review of Elbow‘s latest album, The Take Off and Landing of Everything, you know I’m a huge fan (and if you read that review, and still haven’t listened to Elbow yet, I reiterate: Do it. Now. I’ll wait. . . . And now you’re back. Hungry for more? I KNOW, RIGHT?? They’re so good).

I’ve been wanting to see them for some years now, but sadly, they don’t come here often. Their last jaunt through the Pacific Northwest was in support of their 2005 album Leaders of the Free World. But finally, they are taking time out of their busy European tour schedule of arenas and festivals to come and play twelve dates at small clubs in North America (and yes, the not-so-small Sasquatch festival).

Luckily, their music works beautifully in both large and small venues. The Manchester five-piece thrived in the intimate settings of Vancouver’s Commodore Ballroom and Portland’s Wonder Ballroom over the Memorial Day weekend. The gregarious Guy Garvey connected easily with the audience with gestures both large and small, and amiable chatter.

He gives out advice on how to miss someone to introduce “The Night Will Always Win” (don’t do it alone, and don’t do it at night), he dedicates “Mirrorball” to a couple on a first date (although the Portland pair in question weren’t sure if it was a date or not), talks about a bandmate’s weird dreams (poor Pete Turner, dreaming about killer whales that turn into sardines and then don’t get to sit next to him at the movies), and enjoins the audience to participate with his favorite concert phrase: “Hands, everyone!”  The audience obliged eagerly, raising their arms to clap along to the beat for “The Bones of You” and “The Birds,” swaying back and forth for “The Loneliness Of a Tower Crane Driver,” or even conducting the two violin players for the beloved closer “One Day Like This.”

But above all, Garvey’s voice is what holds the audience in the palm of his hand. Whether soaring on “The Birds,” blending in harmony with the rest of the band on “New York Morning,” or giving a delicate solo vocal on “Great Expectations” (which Garvey called his favorite song he’s written), the man’s voice is warm and delicious (I’m pretty sure his instrument is an official English national treasure. If not, it should be. Who can I write to about that?).

And that voice is well-served and complemented by the whole band: Craig Potter on keyboards, Mark Potter on guitar, Richard Jupp on drums, and Pete Turner on bass. Elbow wouldn’t be Elbow without the music underneath it all, sometimes rocking hard, sometimes delicate, always gorgeous.

I was fortunate enough to be front and center at both shows (thanks, Vancouver and Portland, for not being super early queuers!), and was surrounded by passionate fans, some of whom had traveled to the U.K. to see them on past tours. Myself, had they not come to the PNW, I was ready to hop on a plane to see them wherever I could manage. At the Portland venue, the front row was practically on the stage, the Wonder Ballroom so intimate it was, in Garvey’s words, “like being in bunk beds.”

There wasn’t one song I wouldn’t call a highlight, but rather than gushing over each and every song, I will call out a few: “The Birds” was as stunning as I had hoped, an epic that builds and builds into the most glorious crescendo. If I were the kind of person who cries at concerts, I would have cried during that one. “Grounds For Divorce” was a blast, with the Elbow Choir (aka the audience) in full force for the wordless chorus, and Garvey jumping behind a second drum kit for extra oomph in the instrumental sections. “Scattered Black and Whites” from their debut album Asleep In the Back was a stunning bit of quiet beauty. From the new album, “New York Morning” and “My Sad Captains” have already become concert classics.

The music, the small settings, my perfect spots, the fans around me – all of these combined to gift me with just a perfect weekend of music. Other contributing factors: catching Garvey on the sidewalk in Vancouver, and meeting the band after the Portland show. In case it’s totally gauche to do so in a review, I won’t post my beloved pictures commemorating both occasions.

If every passionate fan, and every new fan who was in attendance spreads the gospel of Elbow far and wide, then perhaps with their next album, they can return to the U.S. and play bigger venues to the bigger audiences they ought to have here. They deserve many more voices for the American version of the Elbow Choir.

Alicia is a Midwest transplant who loves Seattle but misses thunderstorms. Her musical obsessions began when her coolest aunt gave her a copy of K-Tel’s Rock 80 album for Christmas when she was 7. She spent many years studying piano and voice, but the force of rock and roll won, so while she still sings in a local chorale, her true musical passions lie more with The Beatles than with Beethoven. When she’s not working at her job in HR, she can be found singing bad pop songs at the top of her lungs … although sometimes she does that
Related ItemsAlicia KamenickCommodore BallroomElbowNewsSeattle Music HappeningsWonder Ballroom
← Previous Story The Everett Fisherman’s Village Festival: A look back (Photo Slideshow)
Next Story → Lennon’s GOASTT – May 22nd – The Crocodile