KONGOS perform a Concert 4 A Cause at the Neptune

By Christine Mitchell on June 8, 2014@Housetornado37 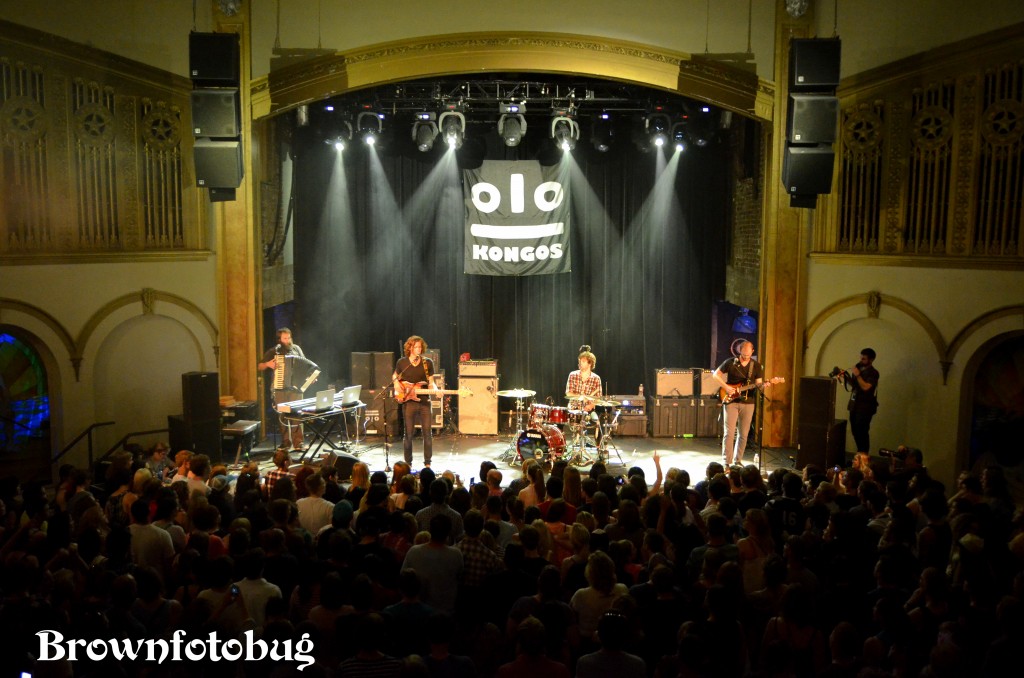 KONGOS at the Neptune (Photo by Arlene Brown)

I understand that the KONGOS  Concerts 4 A Cause show benefitting Youth Care on June 4 was designated all ages, but I was surprised to find myself wedged between a nine-year-old girl and a man easily old enough to be my grandfather.

“This place has better acoustics than the Crystal Ballroom in Portland did last night,” the old man said. He was wearing a fun. shirt, and at the end of the night he struggled to stand up from his seat in the balcony and staggered off.

The nine-year-old (sitting next to her eleven-year-old sister) scarfed a whole lot of Skittles and bopped up and down in her seat during the show in her brand new KONGOS shirt. As the night progressed, I realized the reason for this wide range: KONGOS is an up-and-coming band with a single that fits well into The End’s repertoire, yet they are also a band that honors their roots and the history of rock and roll. And that is something that everyone can admire.

Seattle’s own Pillar Point was on hand to start things off with their spacey electronic dance music. Scott Reitherman’s music, while pleasant, was just okay for me, as each song seemed to drone on a bit too long. The lyrics were not easily decipherable due to low volume, and as far as delivery goes, I’ve heard better voices. The music was solidly mid-tempo with varying keyboard effects and mesmerizing drum loops played live. Various vintage film footage played behind the band during each song, but I had trouble figuring out the connection between the screen and the music. The best pairing was Pillar Point’s music and the footage of strippers from the 1930s or ’40s. That was pretty entrancing. But the other visuals of Easy Rider-ish motorcyclists doing jumps and “straightening out the twisties” didn’t mesh quite as well.

KONGOS is four brothers: Dylan (bass), Daniel (guitar), Jesse (drums), and Johnny (keys, accordion), and while their latest album, Lunatic, was released in the United States on Epic Records just this year, it was originally released in South Africa (where KONGOS spent a large portion of their childhood and where their dad, John Kongos, was a pop star) in 2012. While the KONGOS’ tune most pushed on The End is “Come With Me Now,” I found their secondary single “I’m Only Joking” much more accessible and fun, with a slamming Irish sea shanty beat and smooth, brother-blended vocals. Only one problem with this song being a hit: the big, juicy F-word nestled firmly in the chorus (fine in other parts of the world, not so great here in the USA).

KONGOS’ performance showed their tendency to stick to meaty drum beats that lean toward the tribal. Dylan spends a large chunk of time pogoing with his bass, his long-ish hair poufing out all around his head with each landing. Bearded Johnny was the one that kept drawing my eye, however, as he switched between the unwieldy accordion and keyboard, sometimes feeding unearthly didgeridoo vocals through a microphone. Daniel played slide on “I Wanna Know” and a couple of other songs, and every time I found it surprising in a good way. The band worked through their material effortlessly; they’ve been working this album for quite some time. They did trot out a new song, “I Don’t Mind”, with a chorus that drove those words into the ground. The oddest yet most fun songs were covers; KONGOS brought out rapper Moe’z Art for a strangely perfect mashup of Dr. Dre’s “Nuthin’ But A G Thang” and The Beatles’ “Come Together”, which drove the crowd crazy. The other covers were during the encore: the boys played their dad’s hit, “Tokoloshe Man”, followed by another Beatles’ tune, “Get Back”. These selections told me much more about KONGOS than their own music, even though it draws from several sources and even varying cultures. They revealed a love of music from anywhere and everywhere and a willingness to celebrate and share that love. Thanks for sharing with us. 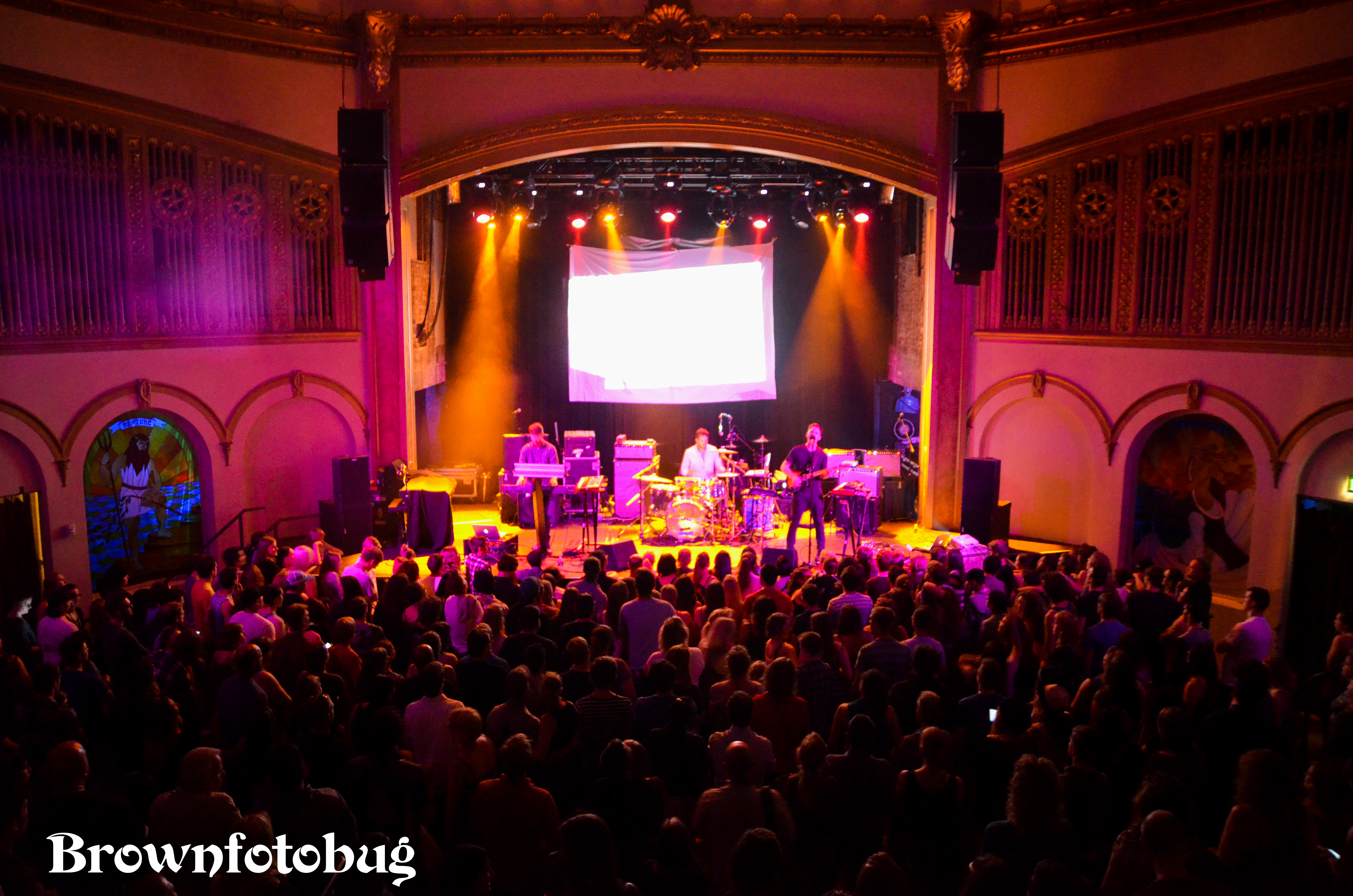 Christine Mitchell has been poring over album liner notes pretty much since she acquired the skill of reading, and figured out the basic structure of rock songs at an early age. Whether it’s the needle popping into the first groove of the record, the beeps that signal the beginning (or end) of a cassette tape, or digital numbers ticking off the seconds from zero, music brings Christine happiness, ponderous thought, opportunities for almost scientific study, and sometimes a few tears. When she started attending live shows two decades ago, a whole new piece of the puzzle clicked in and she has been hooked ever since.
Related ItemsArlene BrownChristine MitchellKONGOSNewsPillar PointSeattle Music HappeningsThe Neptune
← Previous Story Kishi Bashi brought bright “Lighght” to the Showbox
Next Story → Planes On Paper: Refreshing the Musical Palate at The Jewelbox Theater