You know that feeling you had as a little kid, rounding the corner of your final destination to the state fair, and seeing the big roller coaster peek through the fence? Your heart raced with excitement because you just knew you were in for a great time – one that happens only once a year – if you were lucky.  That’s the feeling I got when I pulled up a block away from El Corazon last Monday night and saw the unmistakable sight of Gemini Syndrome‘s RV parked out in front of the venue. I remembered it from the first time I saw them – last September, parked in the same spot. No, they don’t live the glamorous lifestyle – no tour bus, no large trucks packed with gear; at least not yet. They travel the country in their own personal RV, taking turns at the wheel, driving from gig to gig.

I’m not your typical “rocker,” or “metal head,” but hearing their music at that show last year made me an instant fan. There’s some low, guttural screams that typically aren’t my favorite; some words that I couldn’t quite make out; but seeing & hearing their music performed live is just a fun experience overall. The guitar riffs (which are pretty badass), and the loud banging of the drum kit (there’s something about the way Brian Steel Medina sits and plays, not your typical drummer position), meld well with the vocals, making their music quite appealing. Sometimes seeing a band perform live can change your mind, because the performance is so good. It did mine. I didn’t hesitate to purchase their CD on the spot, and when the show was over, I couldn’t wait to get a chance to see them again.

Over the years, the band has played small venues, and larger festivals, headlining short tours, and supporting larger acts on extensive dates, but “Synner Conversion” as it has been dubbed, is their first headlining tour to take them on the road for a full eight weeks straight. Joining them on tour were bands Eyes Set To Kill and Exotype. From a fan’s perspective, the bands seemed to get along great, joking on and off stage, before, during, and after the show. For Gemini Syndrome, their Seattle show marked the final date on this tour, their sixth time playing here, (the fifth appearance at El Corazon; the first was at Studio 7 back in 2011). I spoke briefly with Rich Juzwick (BUV, Guitar) and he said they were encouraged by how well it has gone. I was surprised that after the success of their debut CD, LUX, and seeing some of the crowd sizes that they’ve been playing to across the country, that they still book at El Corazon, a rather small venue by comparison. He said that fortunately they’ve got a strong fan base (known as “synners”) here but still never know how much it will increase, because they get little to no radio play in our area. Yes, radio play still does make a difference, especially in larger markets, and for their music genre.

Crowd size doesn’t change the way they play. They’re full of energy on stage, courteous to their fans on and off stage, meeting & greeting as many as they can before and after the show. The size and layout of El Corazon gives them those opportunities, and their fans enjoy being able to chat and take photos. In fact, lead singer Aaron Nordstrom even came out into the crowd for the last song, encouraged “moshing,” and fans loved it. Within their set, they invited lead singer of Eyes Set To Kill, Alexia Rodrigez, on stage to sing with the band for “Mourning Star,” and lead singer of Exotype, Steven McCorry, for BUV’s on stage during “Ressurection.”  After playing for what seemed to be only moments (they did play for over an hour, which included their entire album’s set list), when they left the stage, I wondered when we could expect to see them again.

I spoke with Nordstrom after the show to get an idea of what comes next. They left Seattle that night, making the 24-hour drive back to LA to get a few days rest with friends & family. After that, they’ll make the long drive in their RV to Fredricksburg, VA for a gig at Operation Rock Fest on June 21. Have they thought about new music, being so busy over the last year or so? Absolutely! They write a lot while on tour (which I’ve found to be hit or miss with most bands), and do have plans to record soon, anticipating their sophomore CD  early next year. They are even working on an all-acoustic EP that could be released sooner, or in conjunction with the CD. That will depend on when they can get into the studio. With the next projects imminent, I’m sure we’ll see them back in our city once the album is released. Until then, they will have a semi-vacation after June 21, until they pick up some tour dates supporting Sevendust in late July and August. 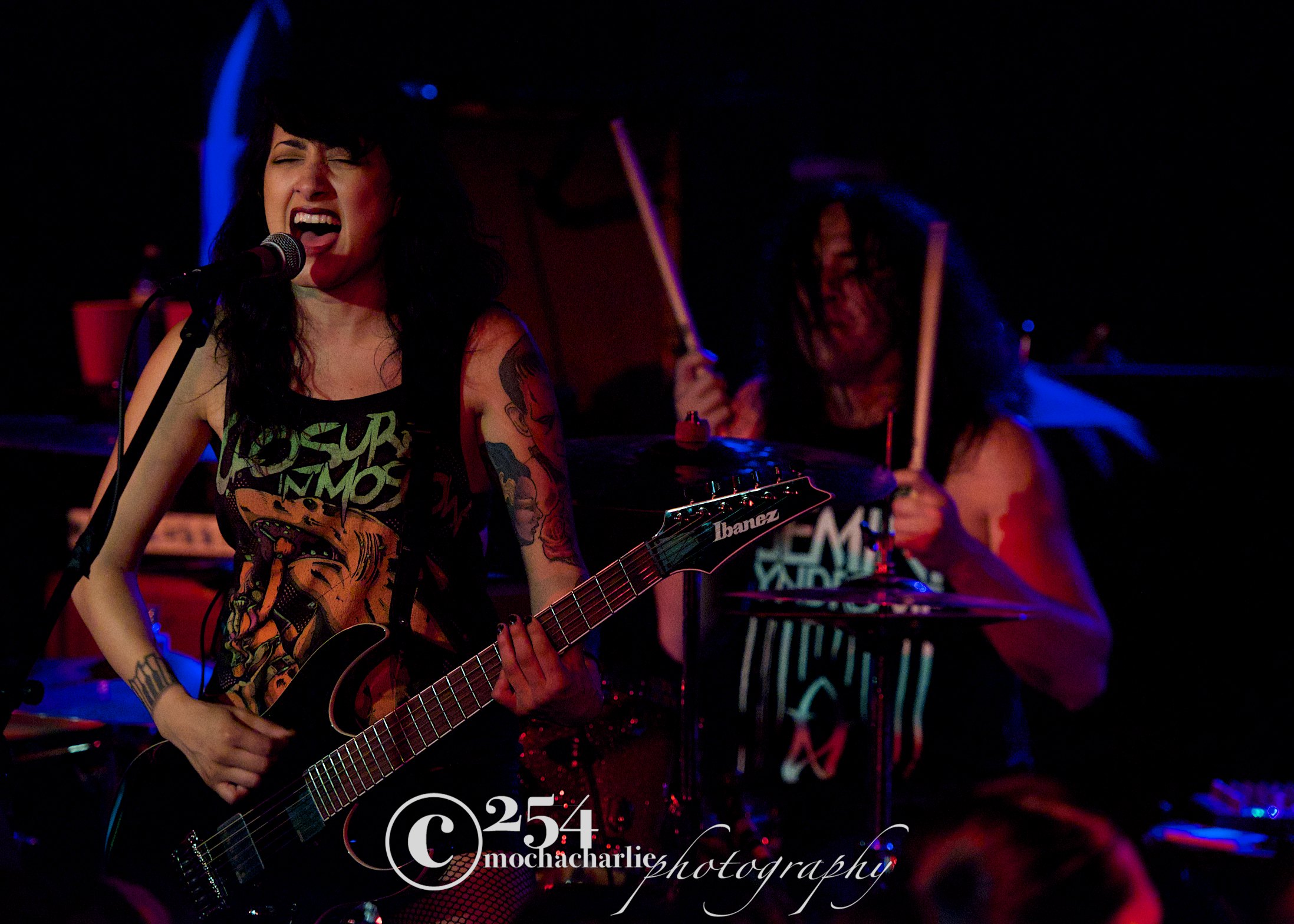 Mocha Charlie is an amazing photographer who has a real passion for music. She covers and shoots several shows per month in and around the region. She a brilliant photo journalist but most importantly, she is also a mother who does her best to balance out her life and live it to the fullest. Mocha Charlie uses her passion and talent to support the community, her friends and family any way that she can.
Related ItemsEl CorazonExotypeEyes Set To KillGemini SyndromeMocha CharlieNewsSeattle Music Happenings
← Previous Story Planes On Paper: Refreshing the Musical Palate at The Jewelbox Theater
Next Story → Joan Osborne and the Holmes Brothers