King Khan Gets Sexy and Sweaty at Neumos 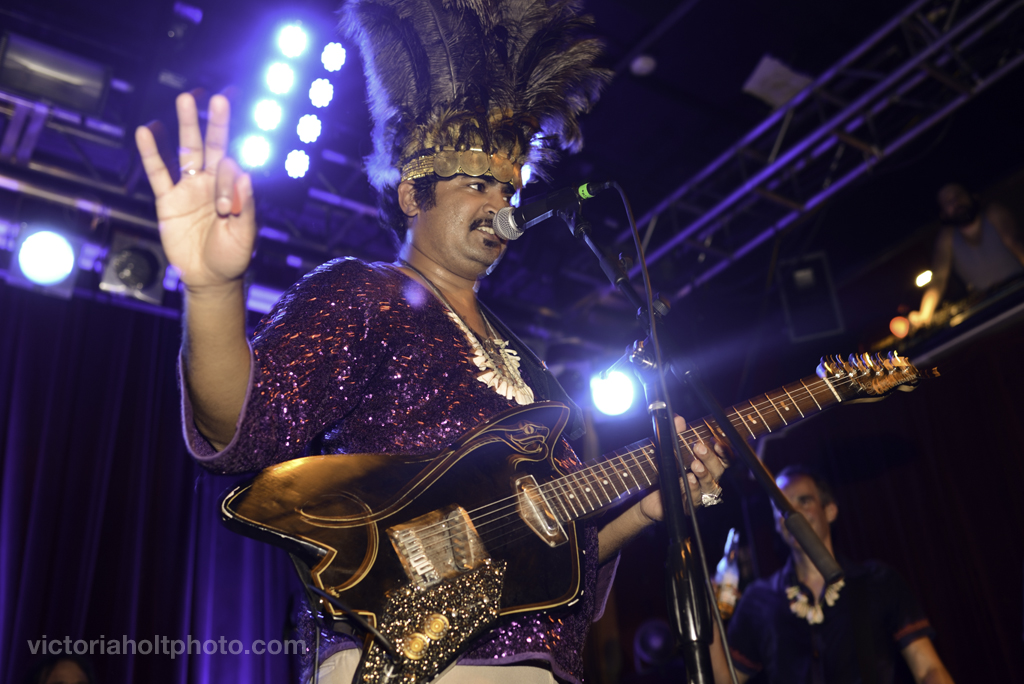 As was to be expected, King Khan and the Shrines were a complete riot on Wednesday, June 25 at Neumos. Hailing from France, Germany and the United States, the band is a rowdy bunch of troublemakers. Arish Ahmad Khan, a.k.a. King Khan, is a rockstar of a frontman in a huge feathery headpiece and purple sequined shirt, and his band members pack a powerful punch, decked out in shiny capes and bone necklaces. The group are known for their ear-shattering combination of soul, psyche, and garage rock goodness.

As the band warmed up prior to Khan’s appearance, Torben Wesche on tenor sax ripped a few scales. Frederic Brissaud (bari sax) and Till Timm (guitar) bowed down to him, waving their hands in homage. The band’s antics ranged from ego-stroking to feigning indifference for one another.

Khan prepped the crowd for a slow burner of a love song, telling a story about a time he met a woman, and how they talked long into the night about their strangely similar pasts. As he rambled, Bourdil and Brissaud began reading copies of The Stranger with expertly affected boredom.

The King retaliated, “Look at them! They’re German, they don’t have any emotions!”

The men replied, “We’re French!” and Khan spat, “Even worse!” Through it all, they clearly love performing together, and their combined talents make for a hell of a party.

Try as he might, Khan couldn’t stop the crowd from going wild. The band came into the crowd themselves a few times to dance or crowd surf, a staple of their live sets.  Bourdil even toted his huge organ into the crowd with him, banging out notes over his head. Enthralled, fans begged the band for more.

After a full night of hits like “Outta Harm’s Way,” “Land of the Freak,” “Shivers Down My Spine,” and “I Wanna Be A Girl” from 2008’s The Supreme Genius of King Khan and the Shrines, photographer Kelly O (The Stranger) joined the band onstage to play percussion with Ron Streeter. Streeter (who used to play with Curtis Mayfield and Stevie Wonder) stayed onstage during the ensuing encore break to pump up the crowd with Kelly O, clapping and chanting “King Khan!” The inclusion of one of Seattle’s local artists in the show made the night that much more personal and unique.

As they took the stage once more, the King was nowhere to be seen. Timm jumped on the mic, announced his arrival, and Khan took the stage in a long orange cloak and a black Egyptian-style wig. As they busted into the single “Born to Die,” from 2013’s Idle No More, he threw open his cloak and revealed a big shiny belly and tiny purple sequined shorts. The man is often scantily clad for shows, but this latest ensemble was stunning. The purple pants were too much for one crowd member, who reached out his iPhone to try to get a close up of the crotch. The King batted his hand away, reminding us all that he’s the King, and the King rules all.

Opening the evening were Red Mass from Montreal and locals Night Beats. The former are a collective group of artists, who tour with a combination of three to ten members at any time. Started by Roy ‘Choyce’ Vucino in 2008, their recordings have involved as many as 50 members. The group seeks to provide artists with an open space for expression of any kind, and as a result their music ranges in genre. During their set, they played everything from garage rock to heavy electro bangers, and two members shared lead vocals. The result was an eclectic mix of fast, fun rock, priming the crowd for the Shrines.

Night Beats started the night off right with their blend of psyche soul garage. Their wild, fuzzed out riffing and broad sound seemed to be produced by only two effects pedals and some reverb. They blew through tracks a mile a minute, leaving the crowd stunned and satiated. Someone tied birthday balloons to bassist Tarek Wegner‘s mic stand, making a festive start to the soul garage party of the year. 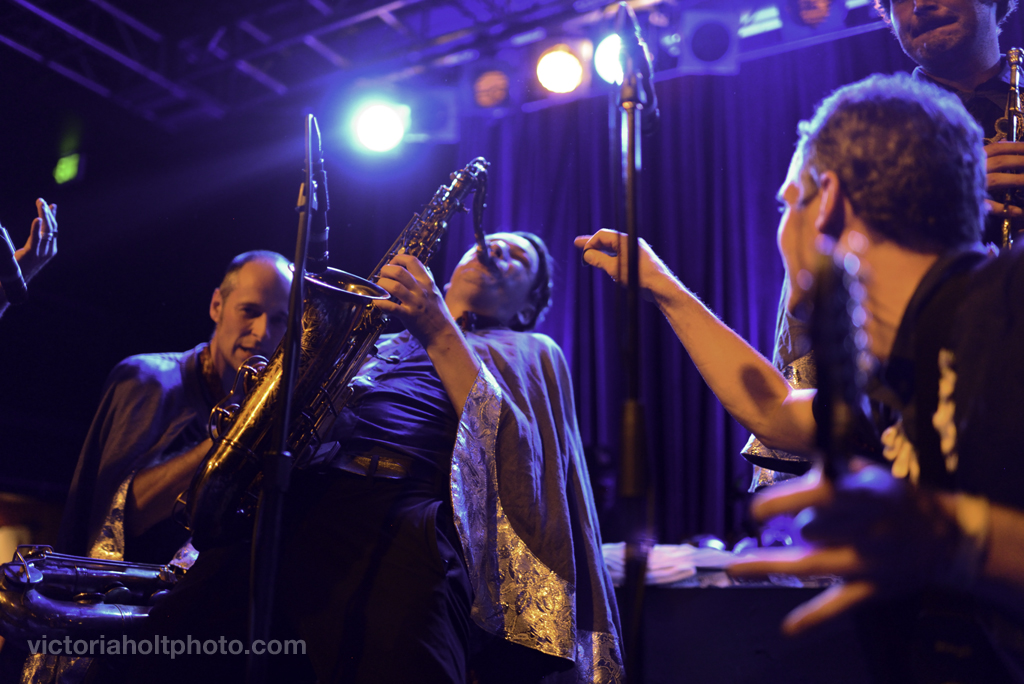 Originally from San Francisco, CA, Victoria completed her Bachelor of Fine Arts in Photography at Seattle University. Her passion is making live music look as great as it sounds. Her work has been featured in The Stranger, The Seattle Weekly, The Capitol Hill Times, and online with KEXP, Live Music Blog, and Back Beat Seattle. Her 2012 BFA thesis, “Seattle DIY: Live Music,” has exhibited at various venues in the Seattle area, and offers an in-depth exploration of six “Do-It-Yourself” underground spaces. For a behind the scenes look at music, she shoots in-studio performances at local radio station KEXP.
Related ItemsKing KhanNeumosNewsNight BeatsRed MassSeattle Music HappeningsVictoria Holt
← Previous Story Veruca Salt at the Tractor Tavern
Next Story → Devo’s Retro-Specto at the Neptune – June 25, 2014