Album Review: U2 – Songs of Innocence

By Alicia Kamenick on September 13, 2014@corianderstem 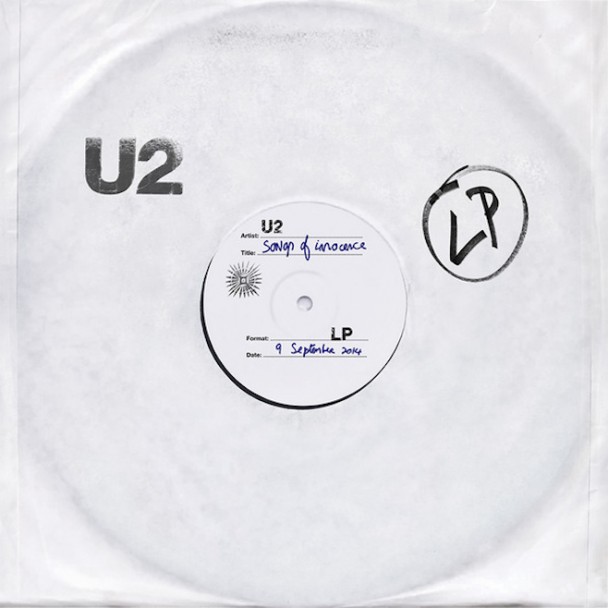 U2 is not a band that works fast. Since 2009 (the year their last album was released, the occasionally exciting, but baffling in its inconsistency, No Line On the Horizon), Bono has given sound bites about up to three new albums in the works.

When 2014 rolled around, things finally seemed to be happening. They had a song nominated for an Oscar. They were on the premiere of Jimmy Fallon’s The Tonight Show. They released a new song during the Super Bowl. Surely, thought U2 fans, this is it.

But then U2 retreated. They brought in different producers to tinker with the work they had already done with Danger Mouse. Had they gotten cold feet about the material? Were they worried they didn’t have anything that screamed “hit?” Fans fretted and sighed with angst. Were pop masters Paul Epworth and Ryan Tedder going to make something horrifically cheesy out of what could have been an interesting new U2 album?

When rumors about U2 appearing at Apple’s September iPhone 6 launch, there was skepticism. “If we’re lucky,” said fans, “we’ll get a new song and maybe an album release date.”

U2: the slow workers, tinkering and worrying about “relevance” until the cows come home. Would the music suffer for it?

Needless to say, no one expected what happened this week. U2 knocked out their new single in front of the Apple world, and then – BAM! – delivered the new completed album Songs of Innocence to 500 million (give or take) iTunes users with the click of a button (and then the next day, Bono revealed that a follow-up album Songs of Experience would be coming soon. And then two days later, an Irish DJ circulated the rumor that there may even be a third album coming. But let’s not get ahead of ourselves).

While the early knee-jerk reviews seemed to focus on the Apple stunt/delivery method, as well as the reviewers’ long-standing grudges with Bono and U2 in some cases, the answer to the question is: no. The music did not suffer for the delays and marketing stunts.

In their fourth decade of releasing albums, U2 has delivered a cohesive collection of solid songs. No, they’re not creating the new Joshua Tree or Achtung Baby. They probably never will. But it’s a relief to know they still have something to give the world  . . . whether or not the world wants it, but let’s leave that argument to the reviewers who would rather talk about that than talk about the music.

Since 2000’s All That You Can’t Leave Behind, Bono’s lyrics have moved from the abstract and poetic to the straightforward and sometimes-poetic. Songs Of Innocence is the first post-2000 U2 album where Bono consistently delivers direct lyrics that feel real instead of dull.

It’s easy to see that the lyrics mean something to him – to all of them, in some cases – in the 11 songs that deal with their youth as kids in Dublin in the ’70s, and their wide-eyed ambition as a band. There are still a few awkward lines that read like a How To Write Like Bono manual (“And there is a light / don’t let it go out”), but overall, they tell true stories with real emotion and memories behind them. There was a real threat that bringing in so many different producers was going to lead to a hodgepodge of songs rather than a complete album, but surprisingly and thankfully, the theme ties it all together, despite the differences in production.

Kicking off with the crunchy guitar riff of “The Miracle (Of Joey Ramone),” the tale of how sneaking into a Ramones show changed their lives, the tone is set. The performance at the Apple event was a bit awkward, as is its position as the lead single, but it sets the tone for the album.

“Invisible,” the Super Bowl download to benefit the (RED) Campaign, would have fit right in among these songs. Produced by Danger Mouse, a defiant “You just wait and see what I can be” from father to son, the song feels blatantly missing from the album.

But on each consecutive listen, the early songs lodge in the brain, and it’s easy to look past the radio-friendly production to see that most of the songs are gems (bland ballad “Song For Someone” is the sole clunker here, despite some nice lyrics).

“Every Breaking Wave,” the second track on the album, is one of two songs that that had its origins during the marathon 360 tour. This song went from a gentle shell of a song with no chorus, to a triumph of pop perfection. U2 at its U2-iest, this would make an excellent choice for a single. Immediately following is “California (No End to Love),” which starts out with a Beach Boys homage as intro before cascading into well-polished light and joy.

The first hints of darkness can be found in “Iris (Hold Me Close),” the latest in a long line of excellent songs about Bono’s late mother, who died suddenly when he was a teenager. There’s a lot going on underneath the pop polish, and the lyrics are powerful enough to burst through the sheen and move the listener, as the 54-year old Bono looks back on the lingering memories of his mother and how that pain shaped his life. There’s even a reference at the end of the song to the eerie echo of vocals that began the haunting track “Tomorrow,” off 1981’s October.

“Volcano” is the second song that started out on the last tour – the riff of the throwaway rocker “Glastonbury” has survived here in this slight, but very fun, song. A nice spotlight bass part for Adam Clayton, and some staccato guitar bursts reminiscent of “Vertigo” provide one more taste of rocking pop before the album takes a turn.

Anger and grit shows up in the back half of the album, along with some more exploratory sounds. Danger Mouse is the main or sole producer on the rest of the tracks, and his trademark sounds are apparent in the percussive intro to “Raised By Wolves,” an urgent, tense song about a Dublin car bombing witnessed by a friend of the band.

“Sleep Like a Baby Tonight” is the most sonically different track on the album, with menacing synths and a slinky melody that mask dark lyrics about child abuse in the church. A distorted guitar solo spills over a chiming glockenspiel, and the crooning lyrics can give chills once the subject matter becomes apparent. “Tomorrow dawns like someone else’s suicide.”

The album ends with the strongest song in the collection, “The Troubles.” Lykke Li adds her name to the short but distinguished list of the few guest stars on a U2 album, joining the fine ranks of BB King, Bob Dylan and Johnny Cash. The song is disappointingly marred by some annoying distortion that creeps in toward the end of the song (perhaps the CD version of the album will clean that up), as well as the frustratingly abrupt fade-out at the end. The Edge’s gorgeous solo should have been given more space. Despite those flaws, the song is an instant classic, and is right up there with “Love is Blindness” as a stunning U2 album closer.

Songs of Experience will ostensibly be the thematic opposite of this one, as the elder statesmen of rock look back on their lives and – dare we wish it? – grant us something even more daring. U2 fans can keep hoping they still have another classic reinvention somewhere inside, but at the very least, they will remain consistent.

Alicia is a Midwest transplant who loves Seattle but misses thunderstorms. Her musical obsessions began when her coolest aunt gave her a copy of K-Tel’s Rock 80 album for Christmas when she was 7. She spent many years studying piano and voice, but the force of rock and roll won, so while she still sings in a local chorale, her true musical passions lie more with The Beatles than with Beethoven. When she’s not working at her job in HR, she can be found singing bad pop songs at the top of her lungs … although sometimes she does that
Related ItemsAlicia KamenickNewsSeattle Music HappeningsU2
← Previous Story Lykke Li at the Moore Sept 17 – Concert Preview
Next Story → Concert Preview: Justin Townes Earle at the Neptune