Raul Midon brings his many talents to Jazz Alley

By Christine Mitchell on September 15, 2014@Housetornado37 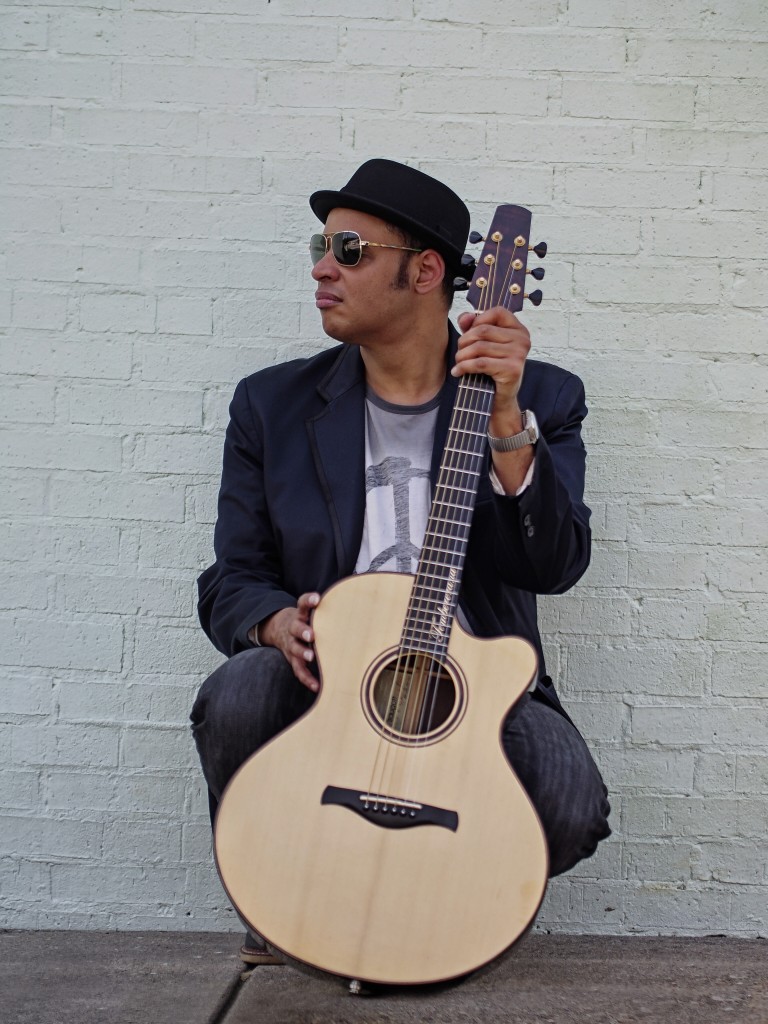 On September 9, Raul Midon came to Seattle to play two nights at Jazz Alley on a trajectory that included living in New Mexico, Florida, New York City, and now Maryland.  He’s a virtuoso guitarist and a soulful vocalist with a wide range, but with supplemental talents that includes playing bongos and piano. He also excels at “mouth horn,” which he considers a legitimate instrument.

Raised in New Mexico, Midon has been blind since he was an infant, the result of not having adequate eye protection while in an incubator (that also blinded his twin brother). He began to pursue music, specifically drums and guitar, during his early school years, and continued studying and playing music through his graduation from the University of Miami.

Initially Midon was recognized for his versatile voice, and he worked as a studio singer for Latin stars like Shakira, Julio Iglesias, and Jose Feliciano, and has also appeared on records by Jason Mraz and Snoop Dogg. However, after several years of supporting others, he decided to move from Miami to New York City to pursue his own guitar-based music.

Midon was in Seattle to kick off the tour for his new record Don’t Hesitate (Artistry records), which will be officially released September 30.

The first show was nearly a sellout, and the crowd was enthusiastic, shouting “Raul!” before he even played a note. He started the show with “Sunshine,” a number that showcased several of his impressive talents, and then moved on to selections from his new record, including “Mi Amigo Cubano” – a song co-written by Bill Withers, “Listen To the Rain,” on which he played piano, and “Was It Ever Really Love?” Throughout the show Midon chatted between each song, explaining the inspiration or circumstances that lead to their creation. His story of working with Withers was humorous, as Bill wanted to write a song in Spanish but didn’t know how to speak Spanish, so he relied on Midon to include lyrics simply because they sounded good when sung in Spanish, even if they didn’t necessarily fit the context of the song.

When Midon had finished playing, the line of fans waiting to purchase the new CD or to take “selfies” with the artist snaked through the venue. It was easy to see why two nights were necessary to accommodate Midon’s Seattle fan base.

Shortly before his set I sat down with him to discuss his music and career.

Brent Stavig: Welcome to Seattle! Is there any particular reason why you’ve decided to kick off the tour here?

Raul Midon: Not really. It probably has more to do with logistics than anything else. It’s a long tour. We’re in the States for a month, then Europe for a month, and then wrapping up back here in Detroit in December.

BS: You hear musicians talk about certain audiences, they’ll say, “Austin audiences are the best,” or “I love playing Atlanta.” You’ve been touring for years; have you ever had the experience of, “Oh yeah, this is definitely Detroit” or some other city simply based on the audience reaction?

Raul: Not really. It has more to do with the venue. If the crowd is standing of course they’re more active and loud, but when they’re sitting down – like here at Jazz Alley where they’re eating while the show is going on – they tend to me more reserved.

BS: I watched some clips from the live “Invisible Chains” album that was recorded at Joe’s Pub in New York, and they seemed pretty boisterous for a sit-down crowd.

Raul: Yeah, well I guess they were excited or something.

BS: Maybe because they knew the show was being recorded for a live record.

BS: So, how did you end up in New York? Were you encouraged to move there rather than to a place like L.A.?

Raul: Actually I was discouraged from moving there. I was living in Florida and really wanted to move someplace where my music had a chance. Everyone said that New York was too rough, and that I’d have a really tough time finding an audience, but it just seemed like a good move to me. It was weird being in a city where it seemed like everyone there was there for one thing. They were there to make it in music, or to be an actor, or a chef or whatever. Just one thing.

BS: Where did you get your first gigs?

Raul: We used to play at a place called Arthur’s in the West Village.

Raul: Yeah, something like that. It was weird. They’d have these Top 40 bands playing Prince and stuff, and then we’d go up there and do our stuff in-between the cover bands. It seemed like an odd mix, with us playing Latin-influenced jazzy stuff between sets of bad ’80s music, but the audience liked it. We used to make good money there too. We were able to pay our rent from those gigs.

BS: And now you live in Maryland.

Raul: Yeah, we wanted to buy a house, and something popped up in Maryland so we made the move.

BS: You must miss New York.

Raul: I do. I miss having things to do. (laughs)

BS: Not much going on in the Maryland suburbs, eh?

Raul: Well, it’s nice. I have my basement studio where I recorded the new record, and it’s good for my ham radio hobby, but in New York I could catch a cab and be down at the Village Vanguard in a few minutes, or go catch a play, or go to a game, or whatever. There were always a million things to do in New York.

BS: Tell me about your guitar. It’s custom-built by Jeff Traugott, and it’s quite expensive. Why can’t someone like Gibson or Martin make a guitar that’s as high quality as a custom guitar? What makes this one special?

Raul: Gibson and Martin make good guitars, but they’re made in a factory. Jeff spent months making this one guitar, and it’s the best guitar I’ve ever played.

BS: Can you explain why it’s so good? Is it the wood? The craftsmanship?

Raul: I don’t know! I mean, yeah – it’s definitely the wood and the care that went into making it, but there’s something else that I really can’t explain. It just feels different, and the sustain is incredible – especially on the upper frets. Usually as you get up on the neck the intonation gets a little wonky, but this guitar stays true all the way up. Charlie Hunter actually turned me on to Traugott guitars.

BS: You’re also quite proficient with your “mouth horn” or “mouth trumpet” as some people refer to it. Do you have any horn players in mind when you’re doing that? Are you trying to get a tone like Miles or Dizzy?

Raul: Not really. When I was in college I used to transcribe music by Lester Young, Cannonball Adderley, Charlie Parker, Miles, all kinds of stuff, and having an understanding of those structures kind of tells me where to go.

Raul: Oh, man. That was weird. He saw one of my clips and called me up. I went into the studio and there was no one there but Snoop and his entourage. No producers; nothing. We basically just smoked a lot of weed. Those rap guys have their own way of doing things.

BS: I listened to your new record “Don’t Hesitate” yesterday, and it seems to me that there’s a thread of sadness running through it, even though the songs aren’t necessarily sad.

Raul: (laughs) It’s interesting that you say that.

BS: The final track, a cover of the Who’s “I Can See For Miles” took me by surprise. Are you a life-long Who fan?

Raul: Oh yeah! I love the Who. Have you ever really listened to that song? It’s a masterpiece. The arrangement is like nothing else that was going on at the time, and the vocal harmonies are just amazing.

BS: Well, Sergeant Pepper’s was out, as was Pet Sounds, maybe Pete felt like he had to rise to the occasion.

Raul: Yeah, that’s right! Pet Sounds was such a great record. Those harmonies could have influenced the Who I guess.

Christine Mitchell has been poring over album liner notes pretty much since she acquired the skill of reading, and figured out the basic structure of rock songs at an early age. Whether it’s the needle popping into the first groove of the record, the beeps that signal the beginning (or end) of a cassette tape, or digital numbers ticking off the seconds from zero, music brings Christine happiness, ponderous thought, opportunities for almost scientific study, and sometimes a few tears. When she started attending live shows two decades ago, a whole new piece of the puzzle clicked in and she has been hooked ever since.
Related ItemsBrent StavigDimitrou's Jazz AlleyNewsRaul MidonSeattle Music Happenings
← Previous Story Fans & Bands ROCK out at Pain In The Grass/Uproar Music Festival
Next Story → Fall Out Boy at The Washington State Fair: screaming abounds