By Victoria Holt on October 11, 2014@holtvictoria 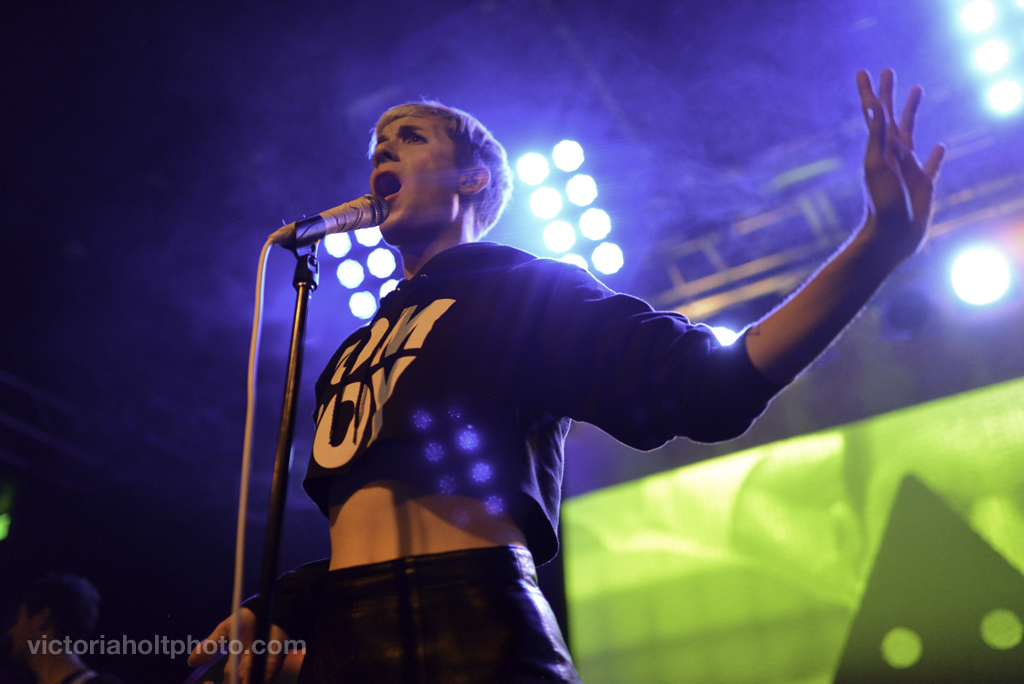 “If you don’t want to be touched, physically and spiritually, you should move to the back,” singer Claire L. Evans of YACHT warned the crowd at Neumos Friday night. She and Jonah Bechtolt make up the band, and were joined onstage by touring musicians Bobby Birdman and Jeffrey Brodsky. The latter started performing with the duo in 2010, and the duo was only a solo project of Bechtolt’s from 2002-2008. They are mesmerizing, a spectacle of dancing, fantastic homemade props, and band-to-crowd interaction. Evans climbed into the crowd on multiple occasions, singing with audience members and inspiring everyone to jump and dance to “The Afterlife” from 2009’s See Mystery Lights. It’s an all-encompassing, forward-moving song with uplifting, chant-like harmonies. Evans sings to the listener, “Death is not the end of this song.” At one point, she turned to the crowd and said candidly, “Life is about death. That’s why we play old songs, then new songs. All things must pass.”

It’s a great example of the band’s mission statement to make their shows spiritual as well as social events. They believe that going to shows should be like going to church: an intentional, life changing experience that plucks at inner heart strings and addresses deeper concerns than just a Friday night dance party. The band also released a list of “YACHT Recommended Mantras,” one of which proclaims, “You do not go to death, death comes to you.” Another states, “Don’t fight the darkness. Bring the light, and darkness will disappear.” Before their set began at Neumos on Friday night, an info-graphic video listed off agreements like: “If there are girls in the crowd, you’ll let them come to the front,” and declarations about using flash when taking photos at all times. Some, like the camera flash, seemed tongue-in-cheek, but others could have been serious. The end of the video urged people to respond with an audible “YES” if they would comply. It’s this interplay between artist and audience which makes YACHT so infectious to watch live.

Other songs addressed issues about life and society, such as “Utopia/Dystopia (The Earth is on Fire),” the combined first two tracks from 2011’s Shangri-La. The first song, “Utopia,” chugs along as Evans and Bechtolt repeat the title, climbing upward in key until they break out in an electronic frenzy of delight. The verse states, “We looked into the future in a visionary state, a psychoactive state. There’s nothing in the future, it’s up to us to make.” It’s uplifting and positive, but grounded, a cautionary tale against giving all responsibility to an omnipotent deity. “Dystopia” is the logical opposite, a slower, more deliberate mantra, with Evans proclaiming, “The Earth is on fire. We don’t have no daughter. Let the motherfucker burn!” It’s reckless, apathetic, a throw-your-hands-up-in-defeat kind of vibe. It’s not their usual perspective, but it’s a compelling counterbalance to halcyon dance songs like”Psychic City (Voodoo City),” for which they gained popularity.

Other treats included Shangri-La’s “I Walked Alone,” a 2012 single called “Second Summer,” and “Le Goudron,” a cover of a Brigitte Fontaine song. They didn’t play the usual crowd-pleaser “Summer Song,” from See Mystery Lights, or funky number “I’m in Love with a Ripper,” but they did play sleeper hit “You Can Live Anywhere You Want.” Bechtolt told the crowd at one point, “Alright, we’re gonna play two more songs, then we’re done!” The crowd booed. “Oh wow, booing?” Evans replied. “Okay fine, we’re only gonna play one more song, fuck you!” Bechtolt joked. The crowd had a great sense of humor, playing along with YACHT’s antics.

Slightly harder antics to swallow were provided by openers White Fang from Portland, OR. A rowdy foursome of 20-something-year-old weed bros, the band is fronted by Erik Gage. Fond of lifting his shirt and sticking things into his voluptuous belly button, this time Gage lost his shirt completely, and bassist Chris Uehlein and guitarist Kyle Handley followed suit. At one point, Gage stuck the mic in, slapping his belly and amplifying the reverberations. The band, and especially Gage, prance around the stage, miming the words to their songs. The dude punk was in full effect as the band played “Can’t Deal with Being Real,” “Pissing in the Driveway” (about peeing on his neighbor’s driveway as he watches), and “Feeling Shitty.” A highlight of the set was when the band covered “Plush” by Stone Temple Pilots, Gage faking his best grunge drawl and pretending to jerk off, squeezing his man boobs for added sensuality. These antics, and many more, can be seen in their video for “Wrecked,” another chaotic gem from Friday night’s set. The band keeps things interesting by switching up instruments, and drummer Jimmy Leslie even sang on one track.

A few songs in, Uehlein and Gage went all out, stripping to their undies. Gage’s were a tasteful grey cotton, while Uehlein wore a spicier hot pink frilly number. Uehlein lost his completely by the end of the set, to the chagrin of the security staff, who tried in vain to get him to put them back on. Once the set ended, Uehlein finally put the family jewels away, and the show went on without any drama. It was a great–though strange–opener for YACHT, and hopefully none of the under-21s in the balcony got too vivid an image. Party on, White Fang! 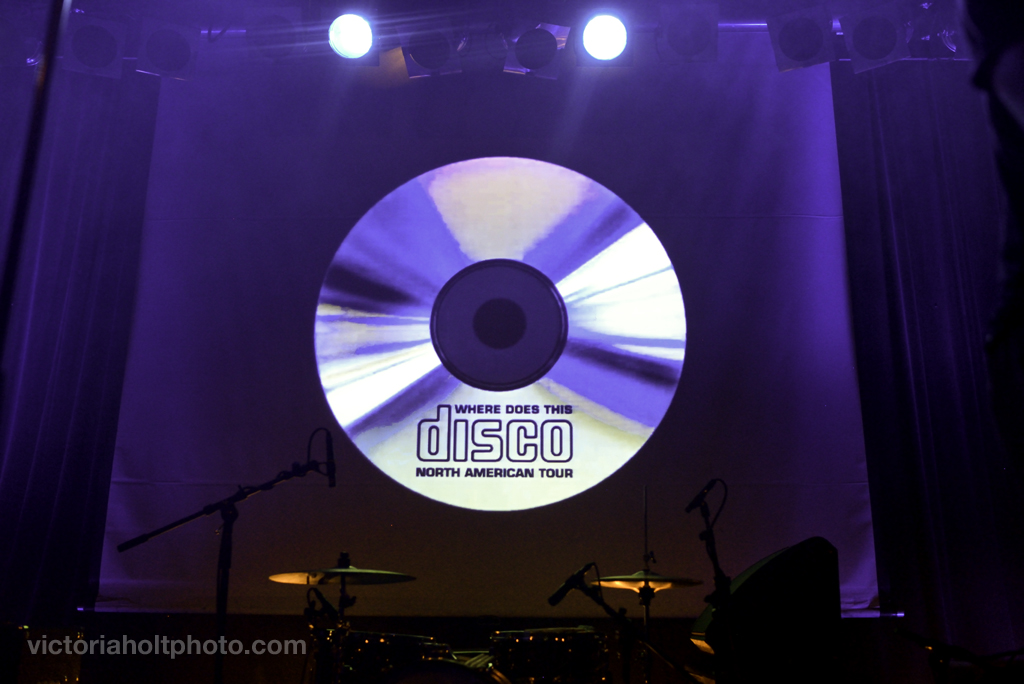 YACHT with White Fang at Neumos (Photo by Victoria Holt)

Originally from San Francisco, CA, Victoria completed her Bachelor of Fine Arts in Photography at Seattle University. Her passion is making live music look as great as it sounds. Her work has been featured in The Stranger, The Seattle Weekly, The Capitol Hill Times, and online with KEXP, Live Music Blog, and Back Beat Seattle. Her 2012 BFA thesis, “Seattle DIY: Live Music,” has exhibited at various venues in the Seattle area, and offers an in-depth exploration of six “Do-It-Yourself” underground spaces. For a behind the scenes look at music, she shoots in-studio performances at local radio station KEXP.
Related ItemsBobby BirdmanBrigitte FontaineChris UehleinClaire L. EvansErik GageJeffrey BrodskyJimmy LeslieJonah BechtoltKyle HandleyNeumosNewsSeattle Music HappeningsStone Temple PilotsVictoria HoltWhite FangYacht
← Previous Story SMI Radio Ep. 105 On Demand: Hobosexual and Olivia De La Cruz (in studio performance)
Next Story → Twenty One Pilots at the Neptune: a visual feast