By Katrina Charles on October 22, 2014@Katrina_Charles 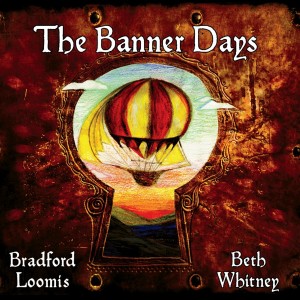 There’s something so magical about the chemistry that Bradford Loomis & Beth Whitney bring to their first joint effort The Banner Days. Typically solo artists, Loomis and Whitney have brought their own unique styles to this project that covers the spectrum of thoughtfully beautiful ballads such as “My Beloved” to joyfully upbeat tunes such as title track “The Banner Days.” Whitney’s sweet yet strong vocals paired with Loomis’ expressive range make this duo one powerhouse of a pairing.

The intense tune “My Beloved” is the intro to the album, immediately proving to you just how serious these two are about making you feel something. This gorgeously arranged piece of music begins with Whitney’s crystal clear  vocals cutting through the dark, tangled web of guitar and bass tones. Loomis joins in on the second  verse, and from then on it is a delicate weave of their two voices that slowly build and your arms are covered in goosebumps.

The next song, “Come Dance with Me” takes a step back, and is like a breath of fresh air with the light and lovely guitar intro. This tune is as sweet as the lemonade it makes me want to drink. Why lemonade? I don’t know, but it just makes me want some lemonade. Next, “The Banner Days” is positively one of the happiest songs you will ever hear. An upbeat back-and-forth tale about celebrating “the banner days” (an old saying for a time to remember and celebrate, according to their website), this is the sort of tune that will put a spring in your step and make you appreciate the greenness of your own grass.

“From Dust to Dust,” one of the more rockin’ tunes on the record (for the other, see: “Wanted Man”) really allows Loomis’ gritty and raw side to shine through. “Brother” is Whitney’s turn to show off her ability to tug effortlessly at your heartstrings with every soft-spoken dagger of a lyric. The ending has a surprise breakdown that I won’t ruin for you, but you’ll just have to believe me; it’s awesome. Now, about Loomis’ gritty and raw side I mentioned a second ago? The final song on the record, “Wanted Man,” let’s that side run around for awhile. Well, run around while tied up in the yard. This song can’t really decide if it wants to straight-up rock out or to pensively reflect while perhaps thinking about rocking out. It flip-flops between the two in a way that really showcases just how talented and versatile these musicians are; they can do it all, and they can do it all in one song.

The Banner Days is an impressive first effort from this powerful duo. It’ll make you cry. It’ll make you dance around while washing dishes. It’ll abruptly end too soon because the only glaring flaw is that it is too short.  This album deserves a spot on your shelf, in your car, and in your life. Start celebrating your banner days with the outstanding record.