By Arlene Brown on November 19, 2014@brownfotobug 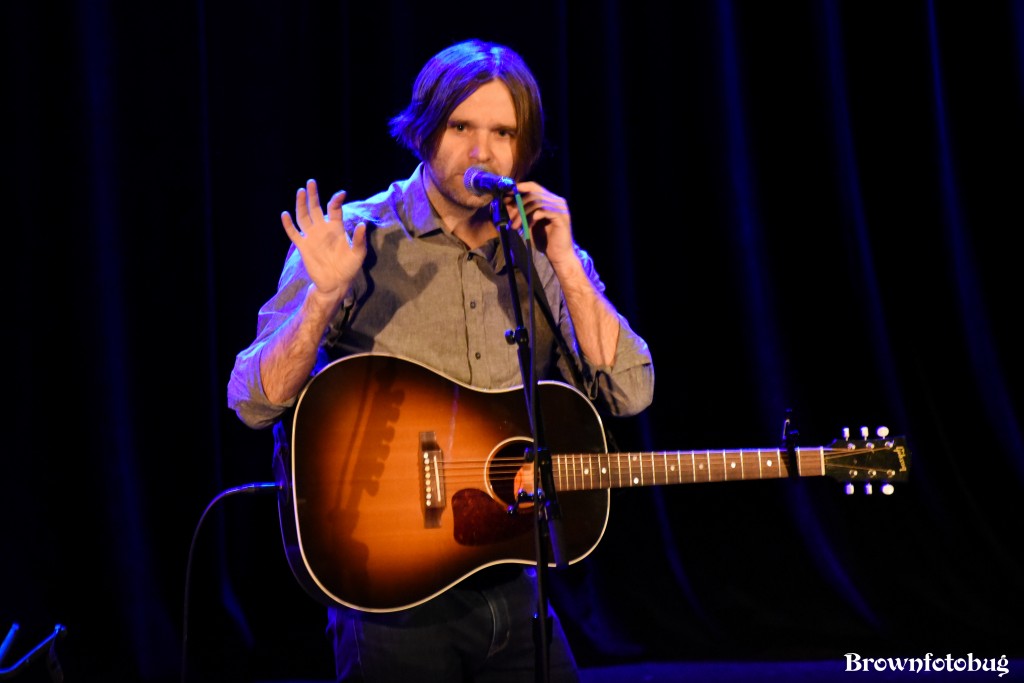 Ben Gibbard (Death Cab for Cutie and Postal Service) and Eric Anderson (Cataldo and Ruler) enchanted the crowd at the Neptune Theatre on Saturday, November 15 – with all ticket sales going to Seattle ArtsFund.  Both crooners lead their own bands in effortless fashion.  Both are snazzy dressers.  Both are very easy on the eyes.  But by far the best thing about these two?  They are very, very easy on the ears.

When you’re familiar with a full band’s sound, sometimes it’s hard to tell if the lead singer really has a good voice on their own or if the band is the strength of the sound.  Not that it’s a big deal, but to know that a lead singer can hold their own by themselves in a solo show makes them all the better.  Gibbard and Anderson both proved beyond a reasonable doubt that not only do they have a good sense of humor, they have no problem singing for their dinner.

Anderson started our “date” night off by taking us on an up-and-down trek through love and loss.  And, for those that were deprived of not knowing who Cataldo and Anderson were before the show, they were definitely falling for him and the music about 30 seconds in.  Forty-five minutes later, they were head-over-heels for him.  SMI has covered Cataldo before, and we are big fans.  Keep these guys on your “must hear/see/buy” list.  They’re just going to skyrocket from here.  Anderson and his Cataldo and Ruler bandmates are ones not to miss.

Being long-time fans of Death Cab for Cutie and Postal Service, seeing Gibbard do a solo show was a rare treat for those at the Neptune.  Gibbard admitted that he’d been to the Neptune to see movies back in the day, but he’d never performed there.  We were treated to some new songs, old songs, and a beautiful cover of up-and-coming band Alvvays’ “Archie, Marry Me.”  The crowd sang along to “Soul Meets Body,” “Title and Registration,” “I Will Follow You into the Dark,”  and pretty much every other song.

The  night was a benefit for Seattle’s ArtsFund, a non-profit organization that supports arts groups in the King and Pierce Counties through funding from donations, and volunteers.  To find out more about ArtsFund, visit their website at www.artsfund.org or email them at info@artsfund.org.

Arlene Brown is both a writer and photographer for SMI. She likes to take things one picture at a time. Covering and reviewing shows from Soundgarden, The Proclaimers, Lorde, The Head & The Heart, to Hank3, Bob Log III, New Politics, Black Joe Lewis, Grouplove, including local and national rising bands and more, she truly loves to try to get that perfect shot. Looking for that raw emotion, energy, power that only live music can deliver, she captures the essence of a show in her own unique style.
Related ItemsArlene BrownArtsfundBen GibbardCataldoDeath Cab For CutieEric AndersonNeptune TheaterNewsPostal ServiceSeattle Music Happenings
← Previous Story Thunderpussy at the Sunset: hot rock
Next Story → Mac DeMarco Surfs Crowd Adoration at Chop Suey