By Christine Mitchell on December 20, 2014@Housetornado37 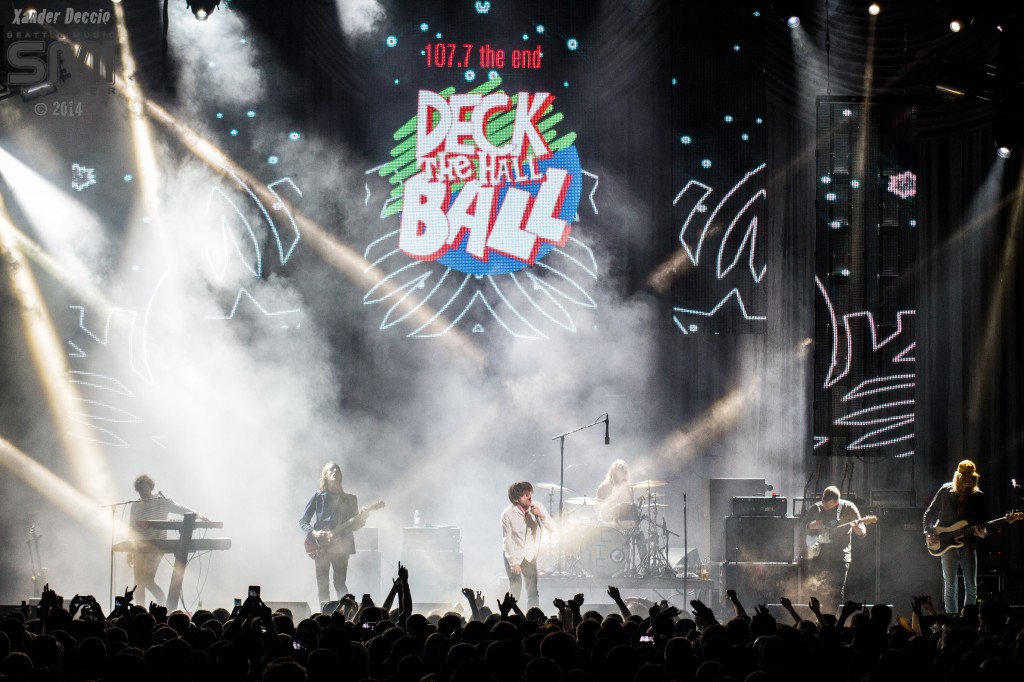 Last Tuesday’s Deck The Hall Ball at KeyArena gave the girls plenty to squeal about as piles of attractive and apparently very flexible male singers and musicians took to the stage to flaunt sex appeal and music, courtesy of 107.7 The End. The jumbotrons flanking the stage relayed #DTHB tagged Tweets that told tales of students having 8:30AM finals the next day or of skipping school or calling in sick to work to attend. High-waisted short-shorts were in abundance along with one of those ugly Christmas suits and a dude wearing an LED stick-man outfit. You know, par for the course festival attire, drizzly December weather be damned.

The afternoon began with England’s Royal Blood, one of them guitar duos. Seattle has their fair share of these (Hobosexual and The Grizzled Mighty come to mind), and indeed, the heavy riffs and metal edge sounded quite a bit like local band My Goodness (which became a three piece just this year).  The difference with Royal Blood is that there was a larger dose of pop slickness, sort of like how Green Day can be punk and still mainstream at the same time. At times the band’s tunes took on a Rage Against the Machine metal-rap tinge. In any case, it was loud, hard, and powerful. A great start.

Vance Joy technically took it from there, but in the scheme of the whole festival, he was kind of a downer. Sounding like an Australian Dave Matthews or Counting Crows, and flanked by two energetic, decibel-crunching bands, Vance Joy didn’t fit in very well with his acoustic guitar, Hammond-esque organ, and spare drumming. In the right setting the he might have been breathtaking, but this wasn’t the place.

KONGOS‘ booming, thumping, drum-centric beats and punk-rock accordion quickly rectified any lethargy left over from Vance Joy’s set. The floor of KeyArena was starting to fill in at this point, and from the higher vantage points it was fascinating to see KONGOS get their sea of fans jumping and waving their hands in unison, especially to the popular “I’m Only Joking.” Another crowd favorite was KONGOS’ now set staple cover/mashup of The Beatles’ “Come Together” with Dr. Dre’s “Nuthin’ But A G Thang.”

The smartest, most complex set of the day came from Brooklyn’s TV on the Radio. Their music is a little messy, with sometimes booming bass, guitar-heavy sound and a lot of electronic tweaking, making it reminiscent of 80’s 4AD label bands or Siouxsie and the Banshees. Throw in some NOLA-esque trombone and various ambient noises (controlled by lead singer Tunde Adebimpe), and the arena was filled with an audible feast.

Sameer Gadhia of Young the Giant owns girls’ hearts. It really wasn’t fair to show a giant picture of him cuddling a puppy on the jumbotron. It was probably a good idea to have the barrier so far from the stage just for this part of the show, though, or the band might have been obscured under a mountain of hormonal ladies. Gadhia nimbly covered the stage, dancing and prancing and screaming in each perfect moment (provoking a lot of screambacks). These guys inject just enough rock into their pop to make them adorably tough…just like puppies. Cute. 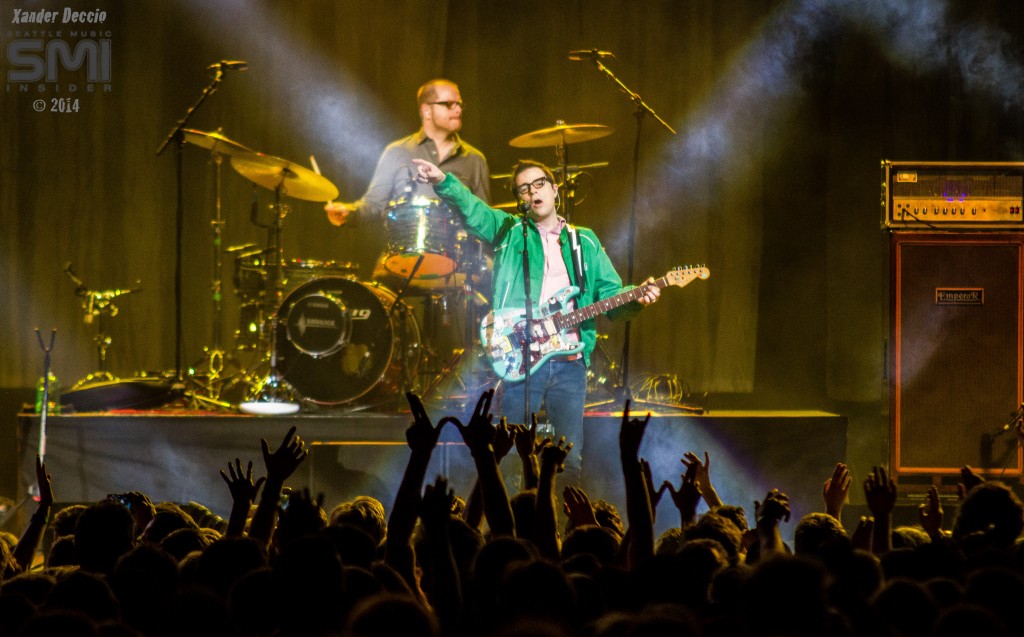 Cage the Elephant put on one of their typically energetic performances, thanks to the antics of frontman Matt Shultz. These Kentucky boys know how to have a good time on stage as they powered through their British Invasion-esque, scuzzy-sexy tunes. Shultz took the fun clear out into the crowd, rolling all over fans several times during the set, at one point with an umbrella, which didn’t really survive the ride.

It was pretty obvious that the crowd was most enthused to see Weezer out of all the bands playing that day. The arena floor was packed and the seats above were most full for this part of the show. Rivers Cuomo and co. eschewed over the top stage antics in favor of showcasing their solid, dual-decade long career. Focusing on the music? What a refreshing concept! With the exception of their new single “Da Vinci” (which has atrociously inane lyrics), Weezer’s set was indeed solid, from current favorite “Back to the Shack” to the iconic encore of “Buddy Holly.” 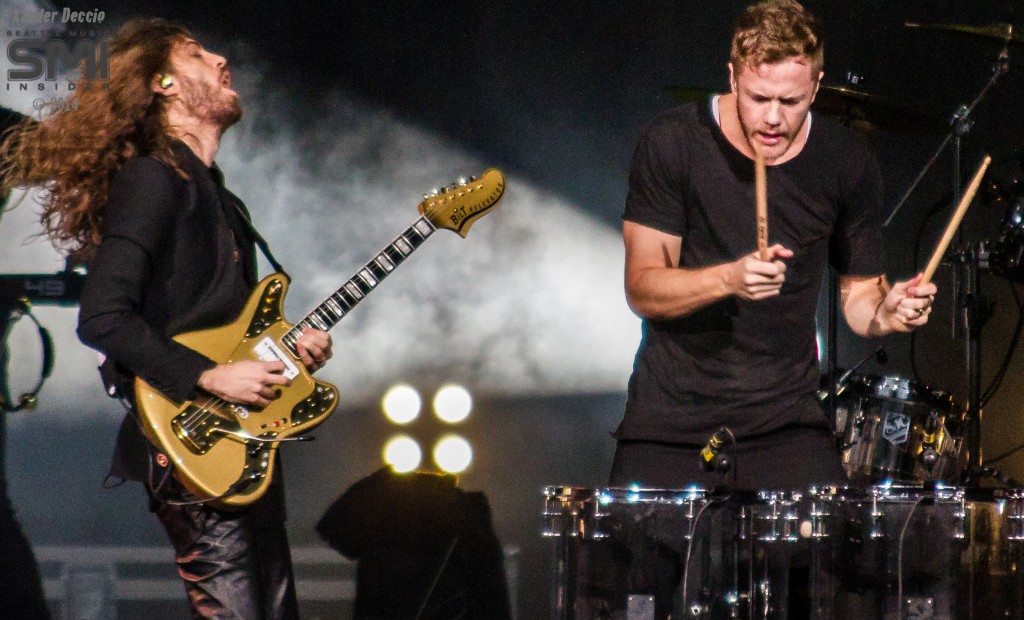 Imagine Dragons brought the night to a showy, poppy close despite the fact that a large percentage of concert-goers had fled for home. Prior to the band taking the stage, roadies spent a good chunk of time taping the edges of the stage and taping X’s onto the monitors so that the band members could see where it was safe to walk…or jump from…or run. And Imagine Dragons had something to jump up and down about. The band announced that their latest album had been completed that very day, to the delight of the crowd. Their set was peppered with their monster-pop music, featuring a Christmas melody and ending with the crushing “Radioactive.”

This year’s lineup was very solid and had just enough range to keep things interesting. It seems to be a bit of a sticking point that The End continues to diss the local scene by not including any of the scads of bands that could benefit from exposure at Deck The Hall Ball. Another issue that is perplexing was the complete absence of any females on stage. There could have been more effort on the part of the festival organizers to level the playing field in these instances. Complaints were also heard from the VIP ticketholders, who were disappointed that VIP End Sessions were limited to three of the eight bands performing, and those sessions were limited to two songs each, with a schedule that was hard to follow (when an End Session is supposed to start sometime in the “four-ish” hour, how can you plan for that when you are also trying to see a favorite arena band?). VIPs were also denied arena seating, which made very little sense in light of the ticket price. But there was one very redeeming factor to mitigate these gripes: every single band performing that night was humble and thankful to be there, and it showed. And when you know that it’s an amazing ride for both the bands and the fans, it warms the heart…and puts you smack into the holiday spirit. 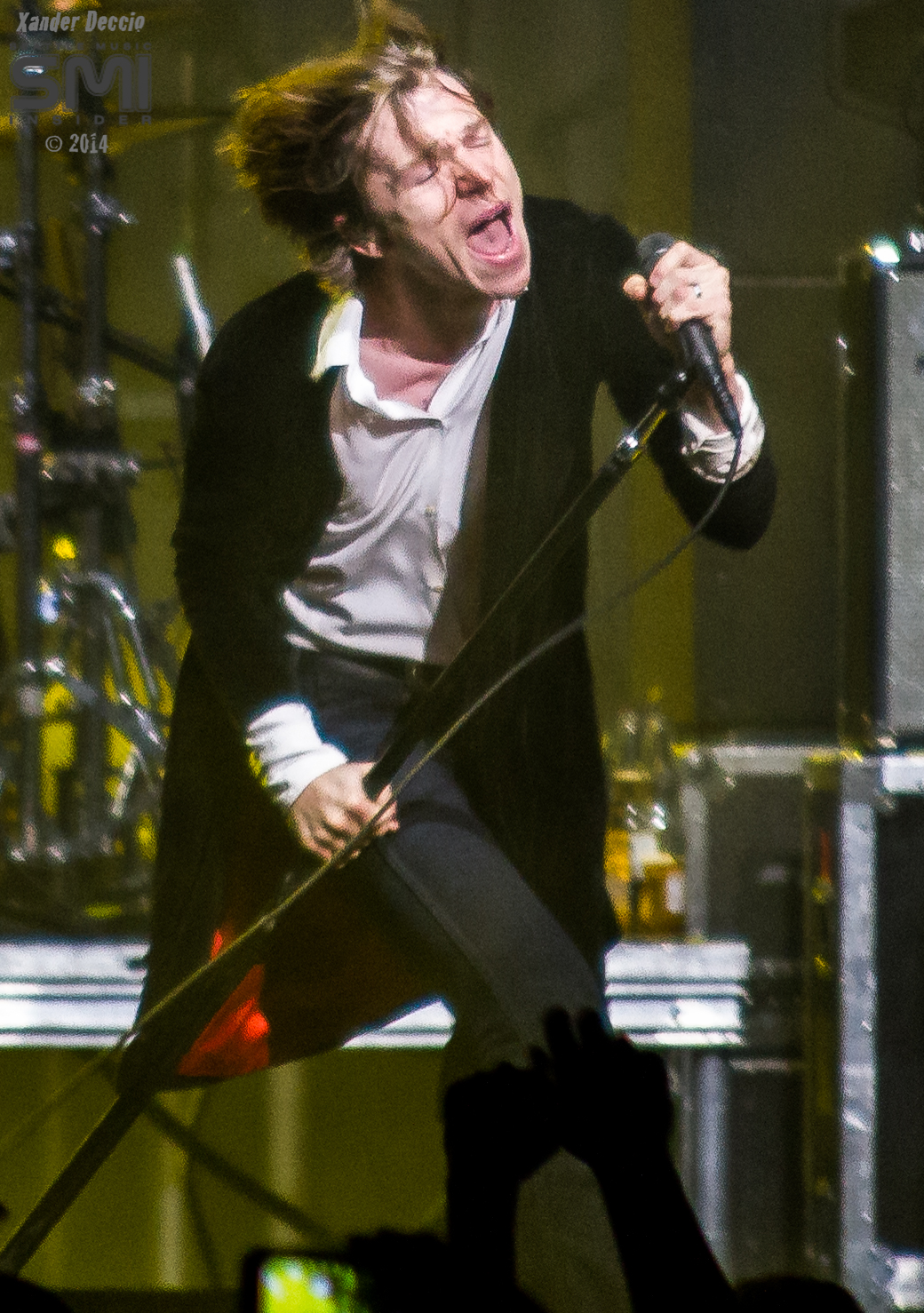 Christine Mitchell has been poring over album liner notes pretty much since she acquired the skill of reading, and figured out the basic structure of rock songs at an early age. Whether it’s the needle popping into the first groove of the record, the beeps that signal the beginning (or end) of a cassette tape, or digital numbers ticking off the seconds from zero, music brings Christine happiness, ponderous thought, opportunities for almost scientific study, and sometimes a few tears. When she started attending live shows two decades ago, a whole new piece of the puzzle clicked in and she has been hooked ever since.
Related ItemsCage The ElephantChristine MitchellImagine DragonsKeyArenaKONGOSNewsRoyal BloodSeattle Music HappeningsTV On the RadioVance JoyWeezerXander DeccioYoung The Giant
← Previous Story Shaprece shines on Columbia City
Next Story → Primus Brings “Pure Imagination” To The Paramount (Photos)