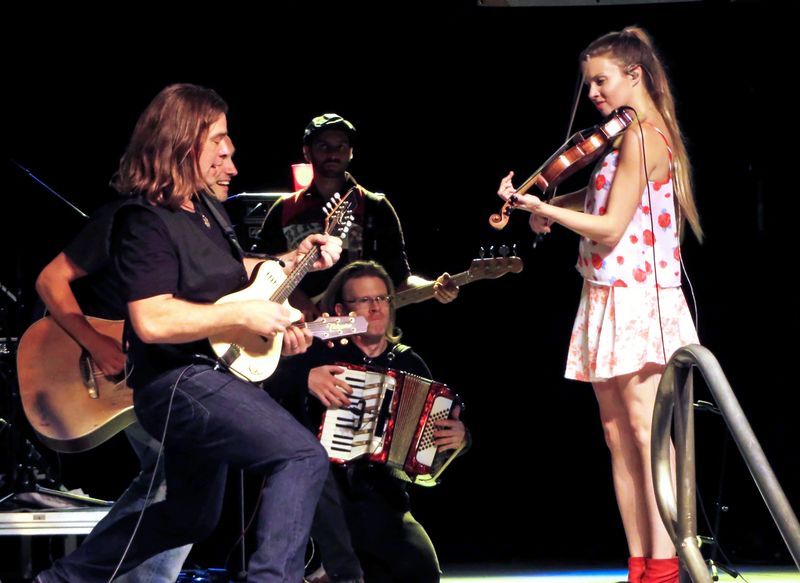 Alan Doyle at the Triple Door

The Triple Door was packed to the rafters on a lovely March 5th evening. Hundreds of fans chatted excitedly, and the air of anticipation was electric before Alan Doyle took the stage. When Doyle comes to Seattle he’s usually performing with his regular band, Great Big Sea, of Newfoundland. GBS are incredibly popular in Canada and the Northern provinces (especially in Nanavut), but in the States they’re simply a cult band with a rabid following.

Doyle is touring in support of his new record, So Let’s Go (Universal Music Canada), released January 20. He’s been on the road with his touring band, dubbed the Beautiful Gypsies, since January 21 and will continue touring through May. At 7:30 p.m. sharp, Doyle stepped alone onto the stage and launched into an a cappella song called “Dream of Home.”  From the second verse the crowd was already shrieking and applauding with joy at his unique voice. Doyle was in great spirits. Dressed in rumpled jeans, a faded black t-shirt, and a black vest, he beamed at the audience and was light on his feet throughout the night. Alternating between a pair of electric mandolins, an acoustic guitar, and an electric guitar, he played deftly and had a natural style that always took a back seat to his vocals.

The Beautiful Gypsies were almost as much fun to watch as Doyle. Cory Tetford (formerly of the popular Manitoba band, Crush) on electric guitar  and back-up vocals was a rock-solid sideman who accentuated Doyle’s songs with beautiful runs and fills. Todd Lumley played electric piano, and strode the stage with intent while playing his compact accordion. Shehab Illyes was an understated yet steady bassist, and drummer Kris McFarlane held everything together with his crisp timing. But the star of the Beautiful Gypsies was Kendel Carson, the beautiful and highly talented thirty-year-old violinist who also played guitar, sang perfect harmony and added some color to Doyle’s reliable tenor. Carson was raised in Victoria B.C. where she started playing the violin at the age of three, and who used to busk on the streets with her brother. She also toured with the Paperboys, has two solo albums, and is a member of the female trio, Belle Star.

The band played flawlessly, and Doyle sang perfectly. There were times when the cylinders were all clicking along so well that the performance came across like a Broadway show; executed with precision, and so well-rehearsed that a mistake would have actually been refreshing.

Doyle was generous with his song selection, performing several songs from So Let’s Go, including the title track, “I Can’t Dance Without You” (which Alan says is getting airplay on American radio; a first for him), “Laying Down to Perish,” the boisterous “1,2,3,4”, and “Stay.” He also performed Great Big Sea favorites like “Sea of No Cares” and “Wave Over Wave.” He spun yarns about writing songs with actor (and good friend) Russell Crowe while enjoying copious amounts of liquor “down under.”

He played two sets, followed by a four-song encore which ended with another a capella song called “Where I Belong.” From the last song of the second set the entire crowd was on its feet. Fandom can sometimes get in the way of a good show, but it was hard to not get caught up in the prevailing happiness as hundreds of smiling faces absorbed the warmth and sincerity that was broadcast from the Triple Door stage.

Brent is a native Washingtonian who spent seventeen years playing in rock bands in NYC in the eighties and nineties. Highlights include sharing the bill at CBGB's with Smithereens, Vernon Reid's Living Color, Modern English, Green River, and hundreds of other awesome bands. I now live in South Seattle and spend my days herding commuters.
Related ItemsAlan DoyleBrent StavigNewsSeattle Music HappeningsThe Triple Door
← Previous Story Cary Brothers Is “Lovin’ On You” and Having The Best Time Of His Life
Next Story → Mr. Motown: Smokey Robinson at the Emerald Queen Casino