By Christine Mitchell on March 24, 2015@Housetornado37 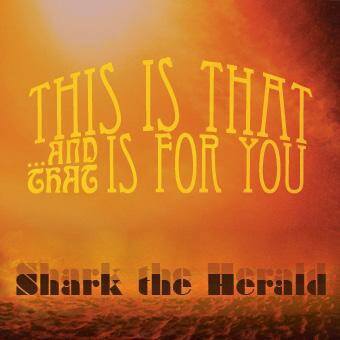 “Escape Route,” the opening track off Shark The Herald’s debut This is That…and That is for You (Soniphone), is a slowburner that starts off with a Pearl Jam-esque riff and digresses into bluesy, psychedelic dirge territory, a theme that continues throughout the album. Spare, dark lyrics and a propensity to jam are Shark The Herald’s hallmarks, and it’s in those cohesive moments when the band gives itself over to the urge to rock out that Shark really shines. This is That… heralds the promise of growth to come for the Everett-based band.

Lead singer and guitarist Kirk Rutherford shares his doubts and insecurities as the album progresses; on “When The Smoke Clears” he repeatedly asks “When the smoke clears, will all of it matter?” as backing vocalist Marianne Stover provides a plaintive, complementary wail. Themes of being stuck (“Escape Route”), not knowing what to say, (“Tongue Tied”), and loneliness (“All Through The Night”) pervade Rutherford’s lyrics, while Nick Michel’s extensive guitar solos illustrate what the lyrics don’t say, punctuated at times by Rutherford’s varying screams and wails. His voice shows tones of Chris Cornell at times, while at others it breaks down, impassioned. At times it can be hard to hear Rutherford’s voice clearly as the production favors an echoing vocal, which doesn’t seem necessary, but it’s there. It isn’t a perfect voice, but it’s full of promise and strength and shouldn’t be thrown down a well.

The album was recorded at Uberbeatz Studios in Mukilteo with Soniphone Records owner Johnny Lee Ledford, who eschews the use of click tracks, favoring a more organic approach. The result is something warm and loosey-goosey, especially during the aforementioned instrumental jams. The music romps darkly about in the way that only the blues can, the energy of the band pushing against the constraints of ordered time. This is That… is an authentic first expression of a local band that has been together for just under two years. It is an album that portends things to come in the future as Shark The Herald continues to hone their craft, lyrically and musically. One can only hope that Rutherford can reach within himself and share more; it’s worth hearing.

Shark The Herald release This is That…and That is for You this Friday, March 27th, in CD and digital formats, with a vinyl release forthcoming at the end of the year. The band is celebrating the release with a show at The Cannery in Everett on Friday as well, along with supporting acts Choir of Crickets and How Bout Now. SMI is proud to premeire a full stream of the album here to tide you over until the end of the workweek:

Christine Mitchell has been poring over album liner notes pretty much since she acquired the skill of reading, and figured out the basic structure of rock songs at an early age. Whether it’s the needle popping into the first groove of the record, the beeps that signal the beginning (or end) of a cassette tape, or digital numbers ticking off the seconds from zero, music brings Christine happiness, ponderous thought, opportunities for almost scientific study, and sometimes a few tears. When she started attending live shows two decades ago, a whole new piece of the puzzle clicked in and she has been hooked ever since.
Related ItemsChristine MitchellNew Music PreviewNewsSeattle Music HappeningsShark The Herald
← Previous Story The Hoot Hoots overrun Roaming Herds of Buffalo album release party
Next Story → Tyrone Wells Brings “Roll With It” Tour Home to Seattle