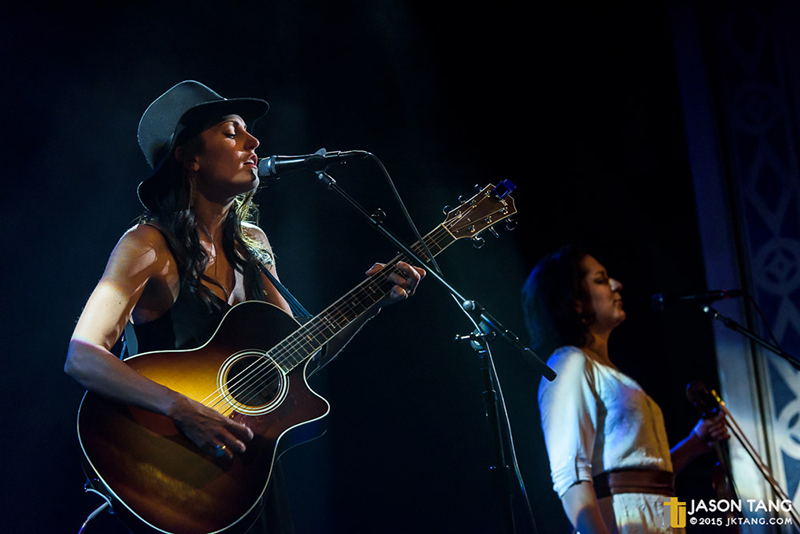 Just three short years after she started writing music – and one year after the release of her first EP – Americana singer-songwriter Sarah Gerritsen will be playing a packed house at The Triple Door alongside her band The Shadow Catchers.  The show took place on April 29th (tickets here), the occasion celebrated Sarah’s debut full-length album Angeline, and the music will turn a few heads in Seattle.  Throw in opening performances by Hallstrom and The Banner Days, and it was a good night to be on the list.

Fans will know Seattle Living Room Shows alumni Sarah Gerritsen by her late 2013 five-track EP.  Called Origin, the offering is a bold and personal look at life through Sarah’s experience.  Her voice, reminiscent of a less-whispery Norah Jones, presides over a cozy combination of guitar, stand-up bass, piano, violin and light percussion.  Origin’s thoughtful grooves sway from listening-room Americana to saucy folk and even quiet gospel.  It sounds more like a professional album than anything else, setting the pace nicely for the band’s new release – Angeline.

Angeline builds with more lucidity on what Origin started.  Sarah and her band bask comfortably in new themes, playing tight and evocative songs through a lens of Americana.  They profit from the genres in Origin while adding blues and a refined confidence to the mix.  The resulting passionate calm is hard to capture in words, and so (as with most records), the story of its creation is the best way to explore it.

Sarah knew she wanted to write music after an “aha” moment in the Tractor Tavern 10 years ago.  A friend took her to see Ohio folk band Over the Rhine at what turned out to be a life-changing performance (you can hear the influence in Angeline).  Sarah had been singing her whole life, but now asked herself “Am I ever gonna write my own music?” also admitting that the desire “killed me – it was painful to go to shows.”   Flash forward to 2012, and Sarah is moving into a cabin-like house in the outskirts of East Redmond.  After immediately writing her first song, she met her neighbor Carina.  Sarah says of the experience:

“[Carina] wandered over to the house for the first time to introduce herself. Boxes were still lyin around everywhere but I invited her in. We chatted for a while… and she eventually eyed my guitar and asked about my music, so I told her she should play it. She picked up the guitar and started playing it like a bass – simple drawn out notes – just providing a pad, a foundation, a feeling for what was to come. Her voice… no words for the first time I heard it. Smokey tones, textured feeling, if you closed your eyes you were in a dark room with smoke in the air.”

That moment led to Carina’s role as backup vocalist in the Shadow Catchers, but also serves as a perfect example for the way the band and Angeline were created – naturally.

The album was recorded at Studio Litho, a playful living room-like space in Fremont.  Produced by Floyd Reitsma, it was all tracked live, capturing the band’s real-time chemistry during the long days they spent working together.  One can hear this connection when, for instance, the nimble mandolin of Jacob Navarro (Spoonshine) dances around Aaron Fishburn’s stand-up bass on the first and title track. The duo reel back and forth intuitively under the firm brush of Sarah’s voice as it comments on Seattle’s rapid expansion and the resulting displacement of Native inhabitants.  (Un?)coincidentally, Sarah met Aaron and Jacob several years ago on the same night at a show the latter two played with The Banner Days.

Classically-trained Violinist Natalie Vandeven is one of Sarah’s oldest friends.  She shines in “Aint so Quiet,” a smolderingly mischievous tune airing some of the blues/jazz elements newer to The Shadow Catchers.  Her timing and tone are precise, accentuating rather unbuttoned vocals and guitar.  In similar contrast, Natalie and Sarah’s relationship allows the two to challenge each other – Natalie drawing Sarah’s attention to theory and composition; Sarah daring Natalie to improvise.

Thus, The Shadow Catchers are a tight-knit and flexible group.  This came in handy when the lap-steel player slated to record on the album couldn’t make it.  Jacob, although fighting a cold, grabbed a slide and nailed the missing parts on his acoustic guitar.  Band kinship also helped when the smooth and almost funky track “Funny Man” came out at first sounding very “white bread” according to Sarah.  She was entirely comfortable asking, “Can we lower the lights?  Ok, Can we close the blinds?  Can we all just take a minute?”  After that minute (and a mutual sip of Bushmills Irish Whiskey), it came off nice and groovy indeed.

All these examples are an effort to illustrate something simple:  that Angeline fits.  Sarah’s process is a throwback to times when bands practically lived together during recording, and it shows.  Whether upbeat or downtempo; whether personal or expansive; whether smooth, soulful, choppy or coy, The Shadow Catchers hit on something true – and they hit on it together.

Hear the band for yourself at The Triple Door on April 29th.  Proudly presented by Seattle Living Room Shows, it provides a sterling example of our knack for picking up rising stars and providing nights to remember.  Should you miss the Triple Door show, stay tuned for new music and concert dates from Sarah Gerritsen and the Shadow Catchers.  A spring tour with Nick Foster is in the works, as well as new songs that Sarah says will be able to “completely fill a room.”

Check out a the live recording and video filmed by Jason Tang at Studio Litho in Seattle, of Sarah Gerritsen and the Shadow Catchers song “No Good”.

Sarah Gerritsen & The Shadow Catchers – No Good from Jason Tang on Vimeo.

Brandon Taylor started writing at some point in the hazy memory of his youth. He remained lost in books and journals until that happy life was interrupted during middle school by a trumpet and a guitar – both of which he continues to play (mostly in secret, composing and recording what he’ll swear are thoroughly broken songs). His love of music born from creating it, Brandon can’t stop listening to and talking with local artists. Moving from Tacoma to Seattle in 2013 only made things worse, and then he started writing for Seattle Magazine and Seattle Living Room Shows. Given the perfect excuse to continue this behavior and “work” as a “journalist” while he’s so disposed, he’s never been happier.
Related ItemsAmericanaFolkHallstromSarah GerritsenSeattleSeattle Living Room ShowsSeattle Secret ShowsThe Banner DaysThe Shadow CatchersThe Triple Door
← Previous Story Bumbershoot 2015 Lineup Announcement
Next Story → Dead Men Walking to play Crocodile Cafe May 5