Home / Reviews / Local Artists / BIG BLDG BASH: on the right side of the tracks

BIG BLDG BASH: on the right side of the tracks 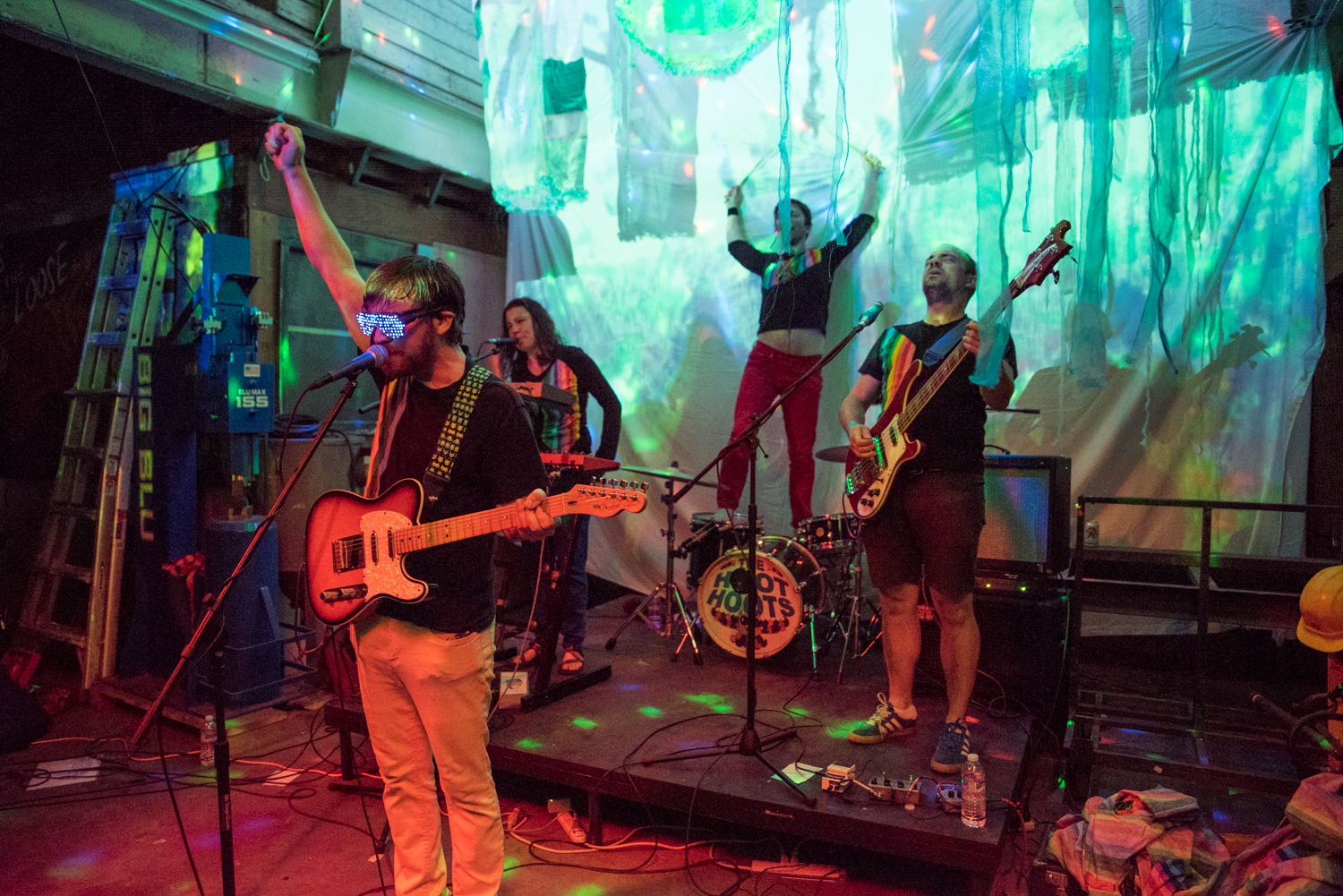 The Big Building snuggles up under the crux of the West Seattle Bridge and The Alaskan Way Viaduct, surrounded by bridge pillars and train tracks. The area is industrial, and there is a concrete ceiling for a sky. The Big Building itself is unremarkable and aging, but it belies the creativity going on inside as it houses a rabbit’s warren of artist’s lofts. BIG BLDG BASH took advantage of these spaces to put on a one-day festival last Saturday that was singular in nature; a house party on gritty steroids with nearly fifty bands playing on a stuffy, sweaty day benefiting the Rain City Rock Camp for Girls.

Things were set up in a rather ingenious way: there were two large spaces (the Yard was a covered open-air space, the Hangar enclosed and a sort of garage-like mechanic area), and two stages were set up in each space to minimize the time between sets as bands switched off between stages. Meanwhile there were two more spaces upstairs, with Studio 18, another live music room and The Moon featuring DJ sets. The BASH got going at a lazy 3 p.m. with Prat Attack at Hangar One. Sadly, it was Prat Attack’s last show before breaking up, but you wouldn’t have known it from the way they pounced upon their music with ferocious saxophone.

It’s impossible to describe every moment involving so many bands throughout BIG BLDG BASH, but here were some of the highlights:

Great Grandpa. Lead vocalist Alex Menne’s voice was exaltingly strange as she paced the stage area barefoot and then walked out into the crowd, becoming one of them as she wailed and stood unassumingly. Menne could be seen throughout the rest of the festival enjoying various bands, still barefoot.

GEMS played a set of live electronic music that was hypnotic and beautiful. They played a song about a hurricane (“Earl Over Ocracoke”) and it was simply spot-on. This was one of those moments when you’re pleased to be in the right place at the right time. This band rocked.

Crazy Eyes. Just crazy. Messy and loud and melodic and straining, through and through.

The Holy Broke. Kent Uleland continued his streak of enthralling audiences as he figuratively slices his guts open and they fell to the floor in front of God and everybody. He achieved this with his ragged, yet tough-as-nails voice and an acoustic guitar. He says he now hates his latest album, Do It Yourself, but make no mistake: it easily makes the list of the best albums of 2015 up to this point and deserves repeated listens.

The Hoot Hoots. This band treated the tiny stage they were playing like it was the KeyArena, with a sound that was slick, huge, joyful, and 8-bit-tastic. Their set was short (due to the usual festival stacking up of late starts) but bombastic and grin-inducing – from their rainbow-splashed monk robes and LED sunglasses to their hair-thrashing and drum-standing antics. COLORPUNCH, people. Buy it. You’ll be jamming to it all. Summer. Long.

The festival wound down sometime after 3 a.m., and once again, all was quiet under the bridge. Until next time.

Christine Mitchell has been poring over album liner notes pretty much since she acquired the skill of reading, and figured out the basic structure of rock songs at an early age. Whether it’s the needle popping into the first groove of the record, the beeps that signal the beginning (or end) of a cassette tape, or digital numbers ticking off the seconds from zero, music brings Christine happiness, ponderous thought, opportunities for almost scientific study, and sometimes a few tears. When she started attending live shows two decades ago, a whole new piece of the puzzle clicked in and she has been hooked ever since.
Related Itemsbig bldg bashChristine Mitchellcrazy eyesFauna ShadeFeaturegemsgreat grandpakent ulelandprat attackrain city rock camp for girlsscotty smithThe Holy BrokeThe Hoot Hoots
← Previous Story Fisherman’s Village Music Festival through the rear view mirror
Next Story → Jonathan Richman at The Crocodile