Wild times at The Sunset with Bob Log III 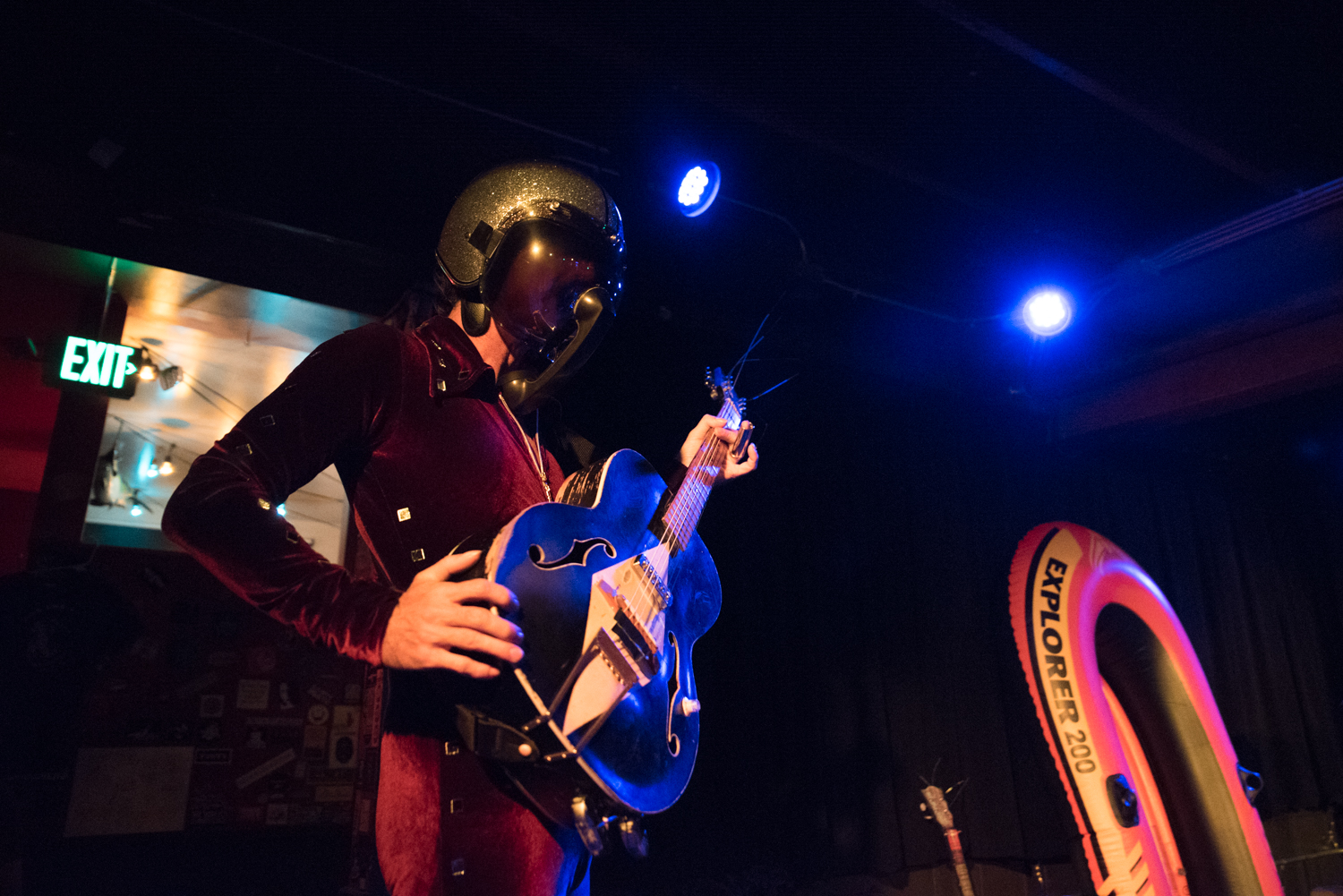 Bob Log III at The Sunset Photo by Christine Mitchell

Bob Log III is the MacGyver of fast-paced Delta blues guitar. He is the velour-suited James Brown of the one man band, the hardest working man in show business. Log, based out of Tucson, Arizona, tours the world tirelessly (150 shows a year in 30 countries), bringing his singular show to every corner of the globe. Tuesday night he brought it to The Sunset Tavern, rocking and interacting with the crowd for a full ninety minutes, and it was worth every second.

Roadhouse-worthy opener, GravelRoad played a great set of bluesy tunes, the kind that go well with a beery haze in a dive. The band recently returned from a tour of Europe, and have been invited to play at blues festivals across the country. The band has taken the art form of blues rock and elevated it with great musicianship. Every member was in top form, including the crazy-happy drummer Martin Reinsel.

Bob Log III took the stage dressed in his finest glitter helmet retrofitted with a telephone receiver for singing, his maroon, studded cannonball suit alternately reflecting and eating up the light. A mess of pedals and cables and a cymbal and a kick drum were snarled about in front of Log’s seat, the cymbals and drum attached with bungee cords to the seat to keep them from escaping (hinting at the intensity to come?). Log wasted no time getting down to business. His insanely fast guitar playing was mesmerizing and otherworldly; his crazy getup entirely belying his incredible talent, yet taken together the whole unique package worked. Part way through the set, Log handed a bag of balloons to the crowd, telling them he was going to “make drums with your air.” Filled balloons were soon whimsically floating around the stage as Log plowed through “Bubble Strut,” stomping on the balloons and popping them at appropriate percussive intervals. The leftover balloons served to punctuate various parts of other songs. At some point, someone in a gorilla suit came to the foot of the stage for a song, dancing away. Log seemed unfazed, and the gorilla went away.

Log searched for his drink with a stage light; suddenly there were seven or so shots and mixed drinks set at his feet. He performed the perpetual favorite “I Want Your Shit On My Leg,” with a lovely lady on his kick drum knee. She bounced and laughed and he danced up and down the fretboard with nary a care. Log’s banter, however, was the glue that held the crazy together. He told stories about being tired and how his guitar would want to play and he wouldn’t want to, and then “she did this” and then Log would launch into some nimble-fingered riff, blowing everyone away. He ran songs into the ground; you’d think he was done, but no. He kept going.

The finale came when Log grabbed the inflatable raft that had been propped up behind him all night and surfed the crowd as he played, his feet pushing against the rafters to keep him from being squished into the ceiling. He left the room still playing his guitar, and the crowd stood around in the aftermath, with popped balloons, spilled drinks, and sweat all around.

Christine Mitchell has been poring over album liner notes pretty much since she acquired the skill of reading, and figured out the basic structure of rock songs at an early age. Whether it’s the needle popping into the first groove of the record, the beeps that signal the beginning (or end) of a cassette tape, or digital numbers ticking off the seconds from zero, music brings Christine happiness, ponderous thought, opportunities for almost scientific study, and sometimes a few tears. When she started attending live shows two decades ago, a whole new piece of the puzzle clicked in and she has been hooked ever since.
Related ItemsBob Log IIIChristine MitchellFeatureNewsReviewsThe Sunset Tavern
← Previous Story Tommy Simmons Headlines The Triple Door & Debuts New Songs!
Next Story → Fisherman’s Village Music Festival through the rear view mirror