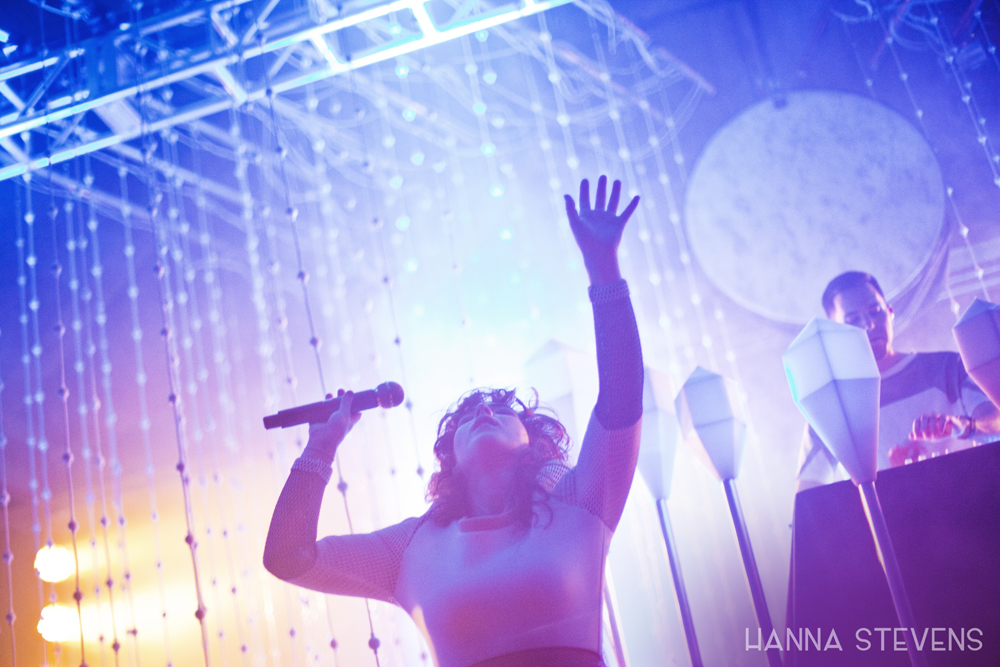 Futuristic electro-pop project Purity Ring delivered an otherworldly audio-visual experience to a sold-out crowd at Showbox SoDo on June 16. The duo comprised of producer Corin Roddick and vocalist Megan James is touring behind their sophomore release Another Eternity with support from their best friends and fellow Canadian artists BRAIDS and Born Gold.

“We are on tour with our best friends so every night is like our dream show,” James said, expressing gratitude.

BRAIDS is the project of Raphaelle Standell-Preston, Taylor Smith, and Austin Tufts. They began their set with their wistfully drifting and driving song, “Taste.”

The trio (formerly a quartet) knows how to build a song with powerful elements of tension, release, and emotion, qualities that run rampant in both their sonic designs and the craft of their lyrics, and the crowd seemed pleasantly surprised. Take “Happy When,” for example. The lyrics began “Sit down with emotion. Take the time to feel it,” and the song carried and built into a desperate, yet beautiful refrain of, “I spun around till I fell down, blood upon my knees as I kneel now.”

The three friends have been through a lot as a band and in their personal lives together, and they appeared to be enjoying themselves and each other greatly, even Smith through his gritted teeth and furiously bobbing head. BRAIDS closed with “Miniskirt,” a single (off their new record Deep in the Iris) which boasts a stunning music video. The song articulates the objectification of a human, based on appearance and stereotypes, via the story of a particular life that endures this reality. Standell-Preston’s vocals transformed from forlorn dejection to fierce anger, taking the song to heights of honesty and begging the listener to challenge stereotypes, judgments, and toxic projections.

The stage was then prepared for Purity Ring, with visuals to enhance the imaginative dreamstate feel of their art. Instead of the suspended cocoons used during their previous tours, Purity Ring was flanked by a forest of light ropes suspended from the ceiling.

James, who makes many of her own clothes, wore a white suit with mesh sleeves and pointed shoulders. Her silhouette amidst the lights was dramatized by her long hair whipping about from the fans. She retreated occasionally into the sea of lights, enhancing the ethereal moments of certain songs and allowing focus to drift to Roddick, who triggered bell tones with mallet strikes upon the glowing lanterns that flanked his workstation.

James also interacted with an array of lights, fanned in a half circle and projecting upward. During “Sea Castle,” she wore white gloves with mirror fragments adhered to the palms, which she used to reflect light into the audience. James practically played the lights as an instrument during “Stillness In Woe,” reflecting bright beams in time with Roddick’s bell hits. These reflections were especially poignant given the repeated phrase, “I’m seeing double.”

James then greeted the crowd. “This is the part of the set where it gets a little more danceable. So we should we just accept how hot it is in here and move more,” she instructed as they began “Dust Hymn,” followed by “Flood on the Floor.” The crowd erupted for “Fineshrine” from Purity Ring’s 2012 debut album Shrines. The audience also sang along to “Body Ache,” clapping in time with the chorus.

When Purity Ring announced “Begin Again” as their final song and stated that there would be no encore, an audience member screamed, “you can just begin again and play the show over!” After the final chorus, James launched herself into the crowd and surfed through screaming fans, returning to the stage for a final goodbye with Roddick.

Purity Ring, BRAIDS, and Born Gold continued the party at Q Nightclub, performing DJ sets to a very full and enthusiastic house. Here it was plain to see the playful chemistry among the bands and the spectrum of their creativity through musical synthesis.

Hanna Stevens is a musician and photographer from Indianola, WA who now lives, works, and plays in Seattle. Music and photography create the framework for Hanna’s life. Her intention is to create community through music and art, and she is thankful for the chance to do so for SMI.
Related ItemsBorn GoldBRAIDSFeatureHanna StevensPurity RingSeattle Live MusicShowbox SodoThe Showbox
← Previous Story Writing His Way, Greg Holden Will Chase The Sun & His Dreams
Next Story → Tuxedo Gets Hot & Funky At The Crocodile