Tuxedo Gets Hot & Funky At The Crocodile 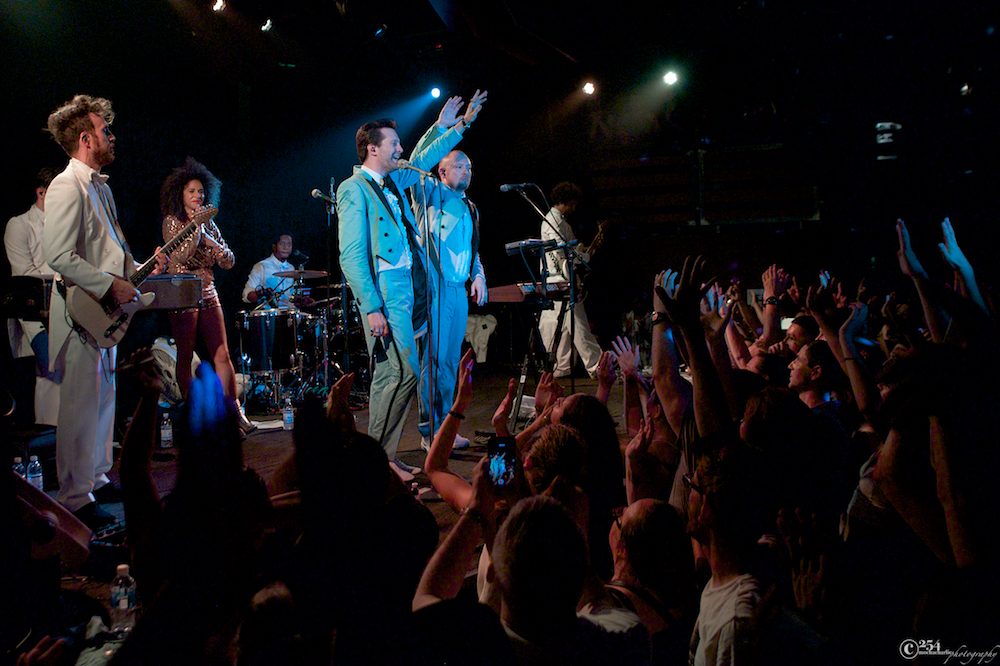 Amid this Seattle heat wave, music venues like Belltown’s The Crocodile are – to put it mildly – hot. In fact, earlier in the week, the temperature in the 500+ capacity venue was well over the one hundred degree mark, and it wasn’t even near capacity. Last Thursday, when Tuxedo took the stage at their sold-out show just after 10 p.m., and as Mayer Hawthorne (Andrew Mayer Cohen) and Jake One (Jacob Dutton) appeared from behind the curtain in full tuxes with tails, the sweaty crowd cheered loudly, not only for their attire, but for the fact that this was their first appearance under this name in Seattle (and they’ve been performing live since 2007). The crowd no longer cared about the heat, they were ready to get funky, and groove the night away.

Starting off as a side project with an exchange of mix tapes in Seattle back in 2005, Hawthorne & Jake One had played together off and on when they weren’t pursuing their solo careers, and continued to perfect their collaborative sound. It wasn’t until three years ago, when a few of their unreleased tracks took the Internet by storm that they decided to take things a bit more serious and collaborate on what would be their debut self-titled EP, which they released this spring.

Described as “neo-soul,” “throwback-soul,” “early ’80s boogie,” “disco-funk” and simply (as Hawthorne puts it) “feel good music,” their style has familiar yet updated beats, timeless grooves, and funky vocals that the two have been waiting to make for nearly a decade. A cross between “Chic,” “Shalamar,” “Kool and the Gang,” and others from that era, Tuxedo’s songs have been redesigned to include deep bass, more familiar keys, and layered synthesized sounds that encapsulate music Hawthorne grew up listening to, reinvented for today’s music enthusiast. They put together a record that they knew people could dance and party to, and from what fans have heard and seen, Tuxedo is having a ton of fun doing just that.

As for their stage performance, the duo wooed the crowd with their suave movements, all decked out in their baby blue full-tail tuxes. Jake One dominated his double-decker synthesizer, slightly off the front of the stage, while Hawthorne sang his soulful, dominant lead vocals. Backed by a full band (also in tuxes, however they were a bit more understated in white), including the delightful solos and back up vocals by Gavin Turek, (who shined in a short sequined romper), they all seemed to ebb and flow in sync to the beats.

Both Jake One & Hawthorne are still dedicated to their solo careers, but it seems they’ve embraced this new project and are dedicated to making shows that fans will remember for years to come. Be sure to track their tour calendar on their website to catch them the next time they come to town. Since this show sold out so quickly, they’ll likely make another appearance, perhaps in an even larger venue, encouraging an even bigger dance party.

Below is their setlist, which included the previously released exclusive single to Japan, “Without Your Love,” and one of Hawthorne’s originals, “Designer Drug,” (off his Deluxe CD “Where Does This Door Go“).

Fux With The Tux

I Want Your Love

Mocha Charlie is an amazing photographer who has a real passion for music. She covers and shoots several shows per month in and around the region. She a brilliant photo journalist but most importantly, she is also a mother who does her best to balance out her life and live it to the fullest. Mocha Charlie uses her passion and talent to support the community, her friends and family any way that she can.
Related ItemsCrocodileFeatureMayer HawthorneMocha CharlieTuxedo
← Previous Story Purity Ring, BRAIDS, and Born Gold illuminate Showbox SoDo
Next Story → SMI Around The World: Eric & Encarnacion’s ‘Flamenco de Raíz’