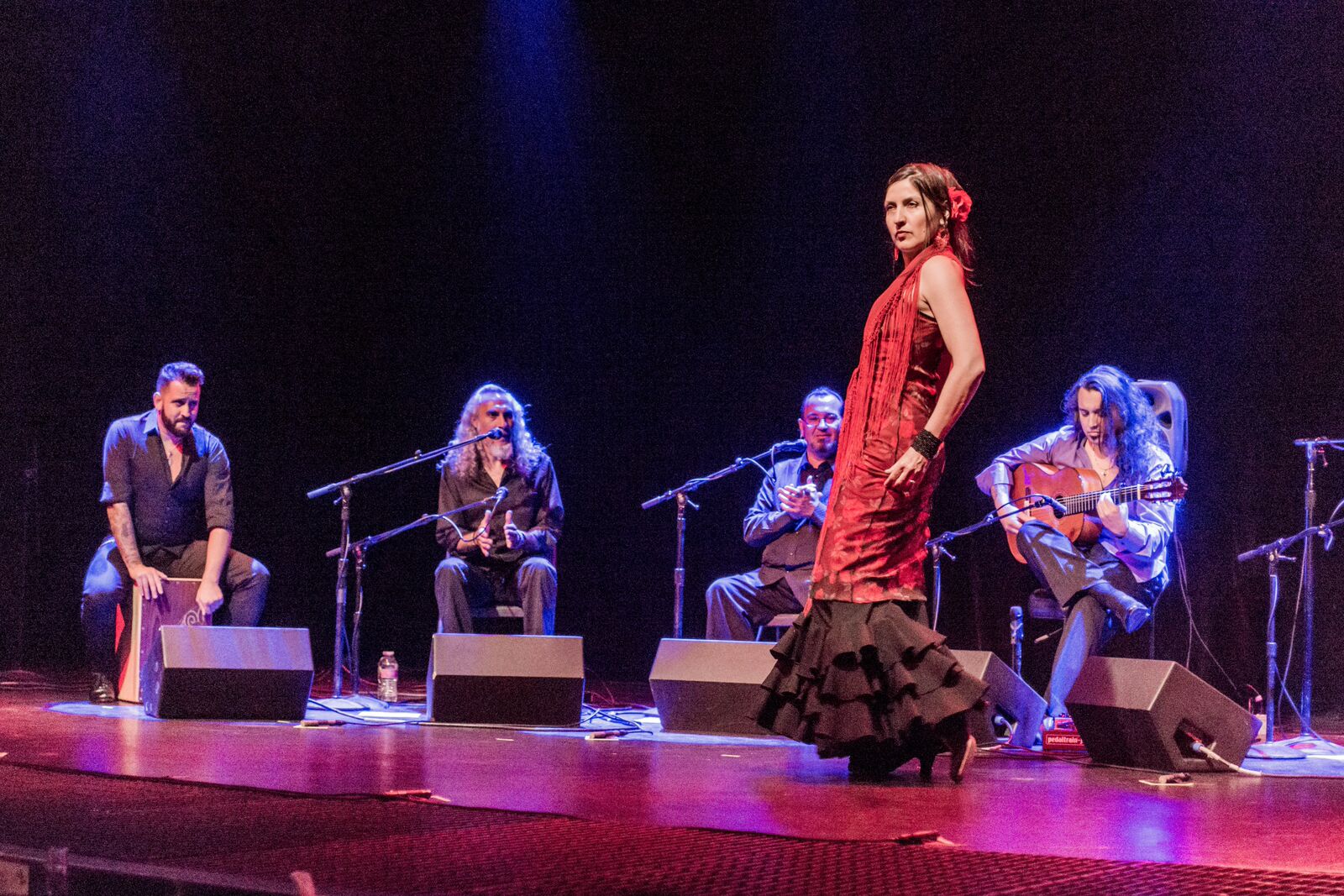 Eric & Encarnacion’s theater ensemble “Flamenco de Raíz” recently performed at the Triple Door with special guest artists from Spain, Manuel Gutierrez, Jesús Montoya, and Luis de la Tota. Their show was intense, fluid, passionate and improvisatory. The performance was full of “duende,” which loosely translated means, having soul. This planned, yet spontaneous performance was exhilarating, as each artist expressed their own interpretation of this beautiful, sultry and complex art form. The ensemble was rhythmically dependent on the brilliant palmero, Luis de la Tota, whose precise handclapping provided a strong platform for dancer and Cajon player Gutierrez, dancer/singer Enarnacion, cantaor (singer) Montoya and Eric, to create a performance full of passion and soul. The ensemble transported the audience on a spiritual journey through the streets of Sevilla.

This husband and wife team have been touring and performing together for over a decade, both internationally and nationally, first with world/rock super group Children of the Revolution, and now with renowned flamenco artists such as Rafael de Utrera with whom they recently released a live record. They co-headlined at the “World Guitar Festival” in Quebec with Manuel Barrueco and have played just about every major venue and festival in Seattle. The two still return every year to Spain to stay connected and immersed in the flamenco culture, both spiritually and artistically.

Encarnacion, “La Paloma,” is originally from Barcelona, Spain and has studied and immersed herself in the art of flamenco for most of her life.  A diverse talent, this flamenco dancer also sings, plays guitar, and is a co-songwriter for the group. She is a passionate and incredible performer who embodies flamenco on all levels, leaving the audience enchanted by her grace and intensity. Encarnacion’s precision, vigorous and fast footwork is both breathtaking and mesmerizing.

Encarna is always accompanied on stage by her husband, Eric Jaeger, “El Comanche,” who is an accomplished flamenco guitarist that studied for years under master flamenco guitarists in Andalucía, Spain. Eric seamlessly infuses his rock/pop/latin roots, which makes his music complex, and multi-layered, yet still grounded in traditional flamenco. Eric’s extensive background both on stage and as a studio producer/songwriter can be felt in his performances, making him a captivating musician.

Download their newest release “Rumba al Maestro” which hit #1 on the Latin/Flamenco charts on Amazon, or find it on iTunes.  You can find more about the artists, including upcoming shows and record releases on their website, flamencoseattle.com.

Christina's passion for travel and multi-cultural experiences have taken her across the globe. Her taste in music mirrors her passions. Christina takes SMI readers "Around The World" with her beautiful photography and eloquently written words, as she covers some of the best world music in and around the Puget Sound.
Related ItemsChildren of the RevolutionChristine LeivaEric & EncarnacionFeatureFlamencoJesus MontoyaLuis de la TotaManuel BarruecoManuel GutierrezRafael de UtreraThe Triple DoorWorld Guitar Festival
← Previous Story Tuxedo Gets Hot & Funky At The Crocodile
Next Story → Legendary Pop Rock Icon Brian Wilson Closes US Tour with Rodriguez in Seattle