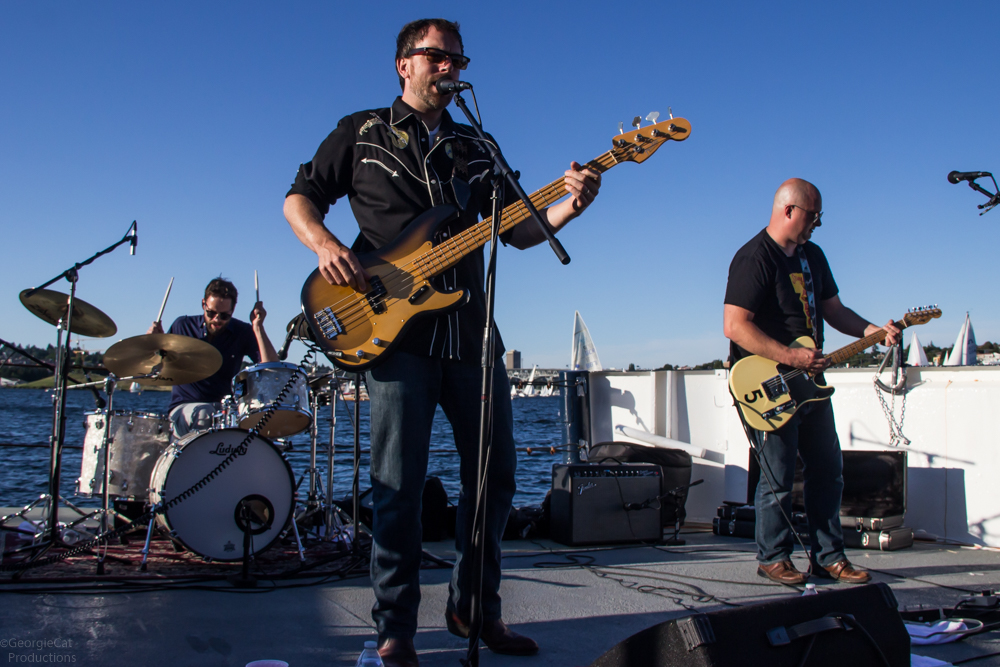 Through the waters of Lake Union on July 14 sailed a full-on floating concert party – complete with live music – from Seattle Living Room Shows.  Passing boaters clapped (and bounced and fist-pumped) in rhythm to Seattle’s rowdy rockers Massy Ferguson as they poured their signature blend of rock, roll and country over the water from the Trek, a retired Alaskan car and passenger ferry now outfitted entirely for listening, drinking and dancing in the sun.  It marked the first of many SLRS boat concerts this summer, and thanks to spirited sets, spirits, and sunshine, it came off brilliantly.

Guests loaded onto the Trek from Lake Union Park to hits and remixes from DJ Indica, who played three sets alternating with those of Massy Ferguson.  Wine and beer (you can bring your own for the boat shows!) accompanied spectacular views of downtown and the Duck Dodge sailboat race, as the ferry’s synthetic grass-covered deck filled with lawn chairs, coolers and blankets.

Upon shove-off, Massy Ferguson took the stage.  They turned up the amps, said a friendly hello and immediately started punching through a heartland of warm, compulsive rock.  It was friendly, it was familiar, and it had a liberated blue-collar feeling to it that went well with the sun and wind.

In many ways, Massy Furgeson seems to fit, and the reason for it is pretty simple:  co-founders Ethan Anderson and Adam Monda have been writing and performing together since 2006.  They came up playing farmers’ markets in Mukilteo (their first paycheck was a basket of fruit) and have since become “one of Seattle’s best bar bands.”  It’s a reputation they revel in but, along with Tony Maan on keys and Dave Goedde on drums, they’ve toured all over the world – Australia, Iceland, Germany and England, to name a few locations.

Although they’ve come close on two occasions, Massy Ferguson has never played a boat show.  The offer to play a wealthy Amsterdam local’s yacht some years ago was botched thanks to political debate (which Anderson has “forever regretted”), and a performance slot on the ferry from Tasmania to mainland Australia was never quite locked down.  As such, they relished the opportunity to finally check “boat concert” off the list and played with according gusto.

Doing jump kicks, rallying the crowd and swilling beers during performance, the boys were boisterous alright, but surprisingly penetrating.  One might expect a lot of guns, Jesus and twang from a band named after a tractor company, but that’s not the case with Massy Ferguson.  Amidst the classic Americana influences (Springsteen, Petty) and the modern, at times almost poppy twists on rock and roll, gleam pangs of poignant narrative.  They’re delivered with the same joyful thrust as lyrics about beer and girls (and are sometimes about these things), but they jump out and make your heart ache a little – which in turn makes you rock a little harder.

In addition to performing like crazy, Massy Ferguson is currently recording an album.  They’ve been in and out of the studio since May.  “It’s nice to be able to throw some real time at an album for a change,” Anderson reflected before the concert.  They’re excited to show their audience what they’re made of.  “Out here you can shake your hands and shake your ass a little bit and it goes a long way,” Monda said, “but in the studio it’s entirely different.”

Another difference in the studio is that Massy Ferguson won’t have their keyboard player for this record.  Maan has been in Costa Rica for a year, and will soon be heading back there – it was sheer coincidence that the Seattle Living Room Show fell during his brief return.  “It’s become more of a power trio thing,” Anderson remarked, “we miss him, but you can really turn the volume up recording fewer parts.”

The name of the album is still forthcoming (it’s expected to come out in early 2016), but we got to preview “Away From the Devil” on the boat.  It was exactly what one might hope for – more highway rock, more stiff drinks in the motel parking lot and more surprisingly introspective lyrics.  We also sampled Massy Ferguson’s unbeatable cover of the Marshall Tucker classic “Can’t You See.”  It started with a live flute solo from Anderson, rolled for lazy miles on a southbound train, and ended with… another flute solo – this one possessing Anderson to parade throughout the entire boat (including the captain’s off-limits navigation room).

All of the above blasted over the lake as the Trek made its rounds, doing a fly-by of Gasworks park, squeaking under the Montlake Bridge and thoroughly exploring Lake Union before returning to Lake Union park for a sunset view of the downtown skyline.

Keep your eyes peeled for more boat (and normal) shows this summer by checking out the Seattle Living Room Shows upcoming shows tab.

Brandon Taylor started writing at some point in the hazy memory of his youth. He remained lost in books and journals until that happy life was interrupted during middle school by a trumpet and a guitar – both of which he continues to play (mostly in secret, composing and recording what he’ll swear are thoroughly broken songs). His love of music born from creating it, Brandon can’t stop listening to and talking with local artists. Moving from Tacoma to Seattle in 2013 only made things worse, and then he started writing for Seattle Magazine and Seattle Living Room Shows. Given the perfect excuse to continue this behavior and “work” as a “journalist” while he’s so disposed, he’s never been happier.
Related ItemsBrandon TaylorFeatureMassy FergusonSeattle Living Room Shows
← Previous Story INSIDE OUT- Pt 2. Instrument and Gear Insurance
Next Story → Capitol Hill Block Party – Day 2 Recap