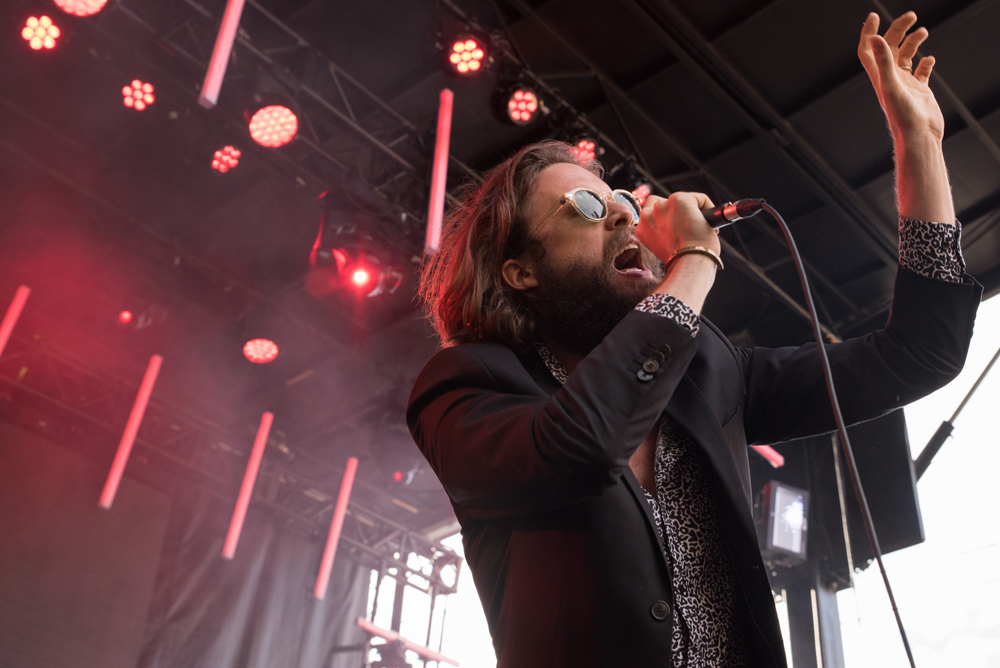 Around midafternoon on Sunday at Capitol Hill Block Party, it started pouring outright. Real estate under trees and beer tents became competitive gathering spaces. Neumos and the Cha Cha were crammed full of steaming poncho-wearers. A tenacious crowd hung on to hear Kathleen Hanna’s latest project, The Julie Ruin, at the Main Stage, but water was guttering down onto stage equipment, and the stage crew was hurriedly tarping everything over. But the show went on in the end; after all, this is Seattle.

The rain kept crowds from topping out, but those who showed up were treated to another day of great performances, from So Pitted’s strange space alien angle to Flatbush Zombies’ insistence for “ten more minutes,” which turned into a crowd-surfing, Nirvana-moshing adventure.  Portland’s Summer Cannibals were an excellent punk-ass  surprise. Chastity Belt ooozed a “not here to entertain you” vibe, both visually and sonically, which made them reverse-cooler-than-thou. By seven o’clock, the skies were turning blue again, as Father John Misty drew an enthusiasic audience with an equally, if not more enthusiastic, performance. (Both Father John Misty and Shannon and the Clams claimed responsibility for the post-rain sunshine. The Clams were probably feisty enough to do it.)

Christine Mitchell has been poring over album liner notes pretty much since she acquired the skill of reading, and figured out the basic structure of rock songs at an early age. Whether it’s the needle popping into the first groove of the record, the beeps that signal the beginning (or end) of a cassette tape, or digital numbers ticking off the seconds from zero, music brings Christine happiness, ponderous thought, opportunities for almost scientific study, and sometimes a few tears. When she started attending live shows two decades ago, a whole new piece of the puzzle clicked in and she has been hooked ever since.
Related ItemsAANAlex CrickBread and Buttercapitol hillCapitol Hill Block PartyCha ChaCharmsChastity BeltChristine MitchellDIIVFather John MistyFeatureFestivalsFlatbush Zombiesgreat spidersI Will Keep Your GhostKathleen HannaLower DensMichael ProfittNeumosPorter RaySeattleShannon and the ClamsSo PittedSummer CannibalsThe Julie RuinThe Wooden SkyWet
← Previous Story Capitol Hill Block Party – Day 2 Recap
Next Story → Capitol Hill Block Party Artists Portraits