By Christine Mitchell on August 6, 2015@Housetornado37 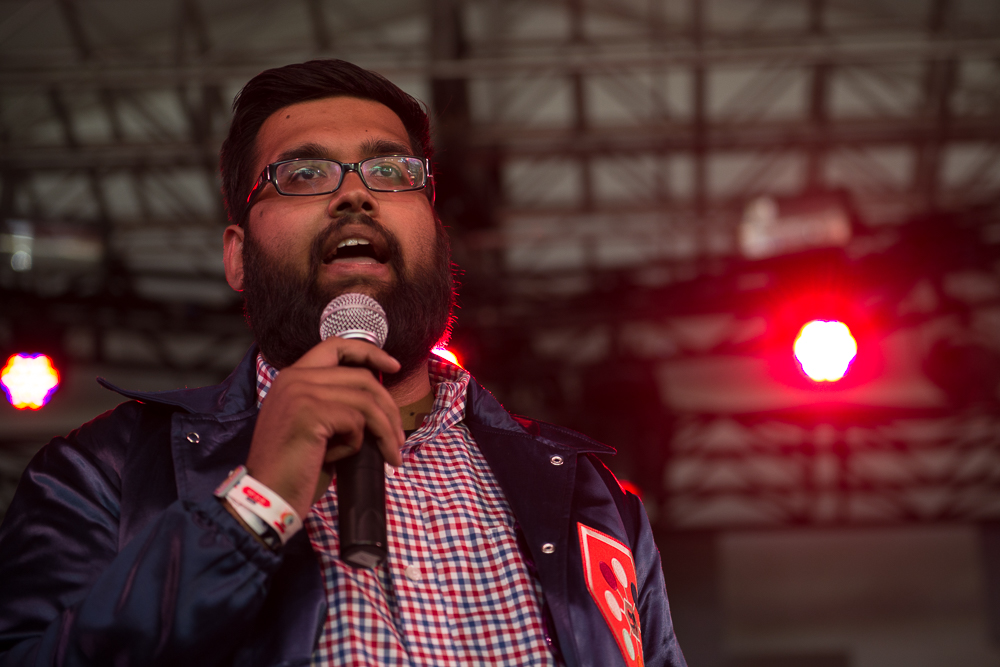 Here is the latest Hot Seat interview featuring comedian Yogi Paliwal, originally from Seattle. Contributor Matthew Lamb had the opportunity to shoot and interview Mr Paliwal after his Sasquatch performance this year.

Recently leaving Seattle to larger comedy grounds, Yogi Paliwal will return to the Seattle area for his eponymous album release At The Grotto at the Rendezvous on August 9th. If you’re a comedy fan his performance is a must to see.

Below is an excerpt of our interview as we dive into the local Seattle Scene and how he has grown to become one of the top comedians from the Seattle Area.

SMI: Starting in the Seattle Comedy Scene what was it like?
YP: I was 18 and grew up in the suburbs, rarely spent time in the city. I’m a shy guy and an anxious person so I crumbled around the “real” comedians. There were no all ages shows or independent shows. The indoor smoking ban had just begun, but the aroma of cigarette smoke still filled the halls. I was terrified, but I knew if I stopped I would always regret it, and I wouldn’t ever be happy. So I trudged along, and somehow they let a pipsqueak like myself into festivals and so many amazing cool things. I cannot believe how many places comedy has allowed me to visit.

SMI: Where in Seattle is your favorite place to perform?
YP: My home club is the Comedy Underground. It is the longest running club in the Pacific Northwest. Any club can claim they book bigger acts, but no club has represented Seattle longer and has grown new talent. The Underground is the heart of Seattle comedy for me. Sadly that isn’t true for all Seattle comedians. I wish it was.

SMI: Sasquatch – What’s that like?
YP: As a participant of the festival since 2008, performing at Sasquatch was everything I could dream and more. The notion that my name is shared on a poster with Kendrick Lamar, Robert Plant, and some of the best comedians and musicians in the nation. It feels very much like it was a typo. I had watched almost every comedian at Sasquatch for 7 years so when I got on that stage I knew exactly what that audience wanted. I can’t thank Adam Zacks and the whole STG team it’s not an experience I will ever forget. When you are not the biggest name at Sasquatch, you still camp. So if you don’t like festival camping don’t bother getting into the coolest festival in the country.

SMI: You decided you leave Seattle to continue your standup, how is that going?
YP: In a word it’s going “alright.” Starting over in comedy is always rough, but I left Seattle because I wanted to be on the bottom of a list where at the top it has Jerry Seinfeld, Chris Rock, Louis C.K, Dave Attell, etc etc. I’m making progress though I run a open mic every Sunday in Washington Square Park underneath the archway. So basically I moved across the nation to yell at people in the park. Look at me Mama I’m making it! I’ll be broke or famous by the end of the year. Probably both.

SMI: What can you tell me about you upcoming release?
YP: I recorded this album right before I moved to New York. I put my heart and soul into my debut album, and I know it shows. The plan is to send it to record labels and let them know I performed, wrote, produced, and engineered this album. I want to get it on Spotify, Pandora and satellite radio so more people can hear what I’ve made. It’s a stressful process to put an album together by the end of it you either feel defeated or you feel free. I’ll know how I feel once people have heard it.

SMI: What are your thoughts on Donald Trump?
YP: The sad truth about Donald trump is he only stays relevant when he’s being controversial. What people don’t seem to realize is if you stop paying attention to the crying baby the fake cries (of racism) will stop. Sadly in a click bait era you don’t need to have substance to be popular all you need is a good headline.

Christine Mitchell has been poring over album liner notes pretty much since she acquired the skill of reading, and figured out the basic structure of rock songs at an early age. Whether it’s the needle popping into the first groove of the record, the beeps that signal the beginning (or end) of a cassette tape, or digital numbers ticking off the seconds from zero, music brings Christine happiness, ponderous thought, opportunities for almost scientific study, and sometimes a few tears. When she started attending live shows two decades ago, a whole new piece of the puzzle clicked in and she has been hooked ever since.
Related ItemsFeatureMatthew LambThe RendezvousYogi Paliwal
← Previous Story Capitol Hill Block Party – Day 2 Recap
Next Story → SMI on Tour: Planes on Paper and Christopher Paul Stelling in Portsmouth NH