Au Revoir at The Rendezvous: Shark The Herald

By Christine Mitchell on August 7, 2015@Housetornado37 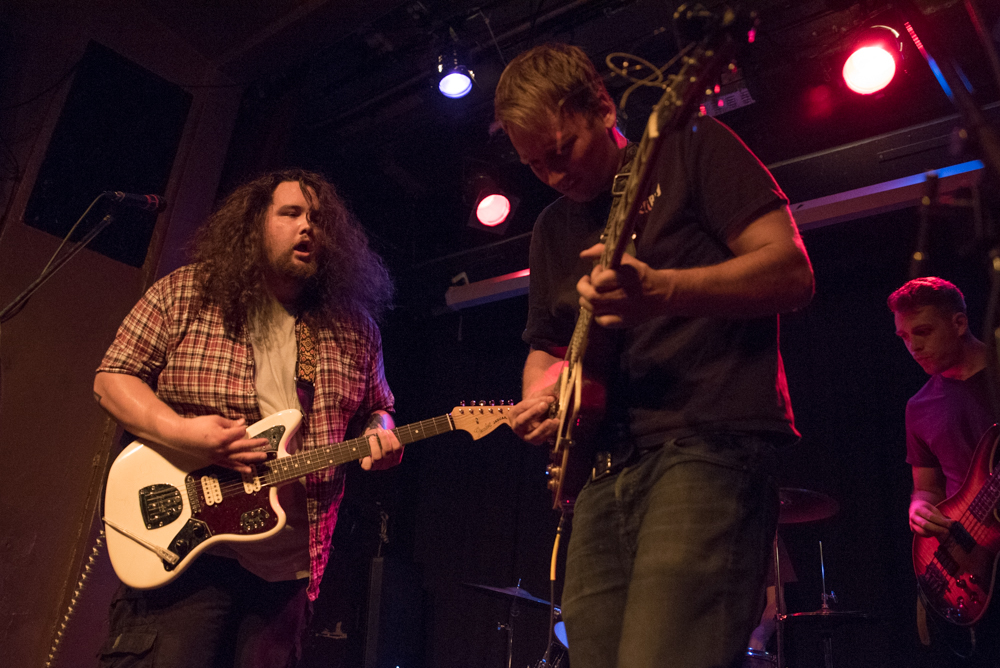 Shark The Herald at The Rendezvous (Photo by Christine Mitchell)

Saturday’s show at The Rendezvous was one that marked some changes in the Everett music scene, as Shark The Herald performed their farewell show, while new kid Johnny Lee Ledford played his first. Meanwhile, a new project is promised to rise from the ashes of Shark The Herald. In this way the promise of the new helped to balance out the bummers.

Johnny Lee Ledford is a pastiche of throwback, from his wingtipped creepers and powder blue suit to his fiery wig shagging in his eyes. His songs run the gamut as well, with his first single “Burn This City” reminiscent of “Space Oddity” era Bowie, and a cover of Mancini’s theme to “Peter Gunn” that included some fist-pump shouting. Ledford had control over the stage, strutting about and playing his guitar with fluorish as bassist Evan Smith and drummer Thys Ferwerda played stolidy, flashing grins at Ledford’s antics from time to time.

Choir of Crickets is starting to show flashes of brilliance when they really get going, their best moments coming when they jam together, brash and bold, with braying saxophone, such as during their song “Cascadia.” Their set started off with the band members making cricket noises (of course), and proceeded through several genre-hopping, psychedelia-inspired songs.

Shark The Herald’s set was short and slightly disjointed, as guitarist Nick Michel seemed to be having trouble with his setup, prompting bassist Tyler Holmes to call for an end to the set earlier than intended. Still, the band produced some hair-thrashing moments as lead singer Kirk Rutherford stomped  around the stage and howled, with highlights being the songs “Tongue Tied” and “Escape Route,” live standbys that have served the band well.

Post show, Rutherford and drummer Ferwerda (who drummed for two bands that night) spoke animatedly about their new project, The Moon Is Flat. It sounds like it is to be more experimental and noise-heavy, and the duo play their first show on September 4th at Tim’s Tavern.

Christine Mitchell has been poring over album liner notes pretty much since she acquired the skill of reading, and figured out the basic structure of rock songs at an early age. Whether it’s the needle popping into the first groove of the record, the beeps that signal the beginning (or end) of a cassette tape, or digital numbers ticking off the seconds from zero, music brings Christine happiness, ponderous thought, opportunities for almost scientific study, and sometimes a few tears. When she started attending live shows two decades ago, a whole new piece of the puzzle clicked in and she has been hooked ever since.
Related ItemsChoir of CricketsChristine MitchellFeatureJohnny Lee LedfordKirk RutherfordNewsShark The HeraldSoniphone RecordsThe Rendezvous
← Previous Story SMI on Tour: Planes on Paper and Christopher Paul Stelling in Portsmouth NH
Next Story → Ain’t No Party Like A Watershed Party