By Alicia Kamenick on August 13, 2015@corianderstem 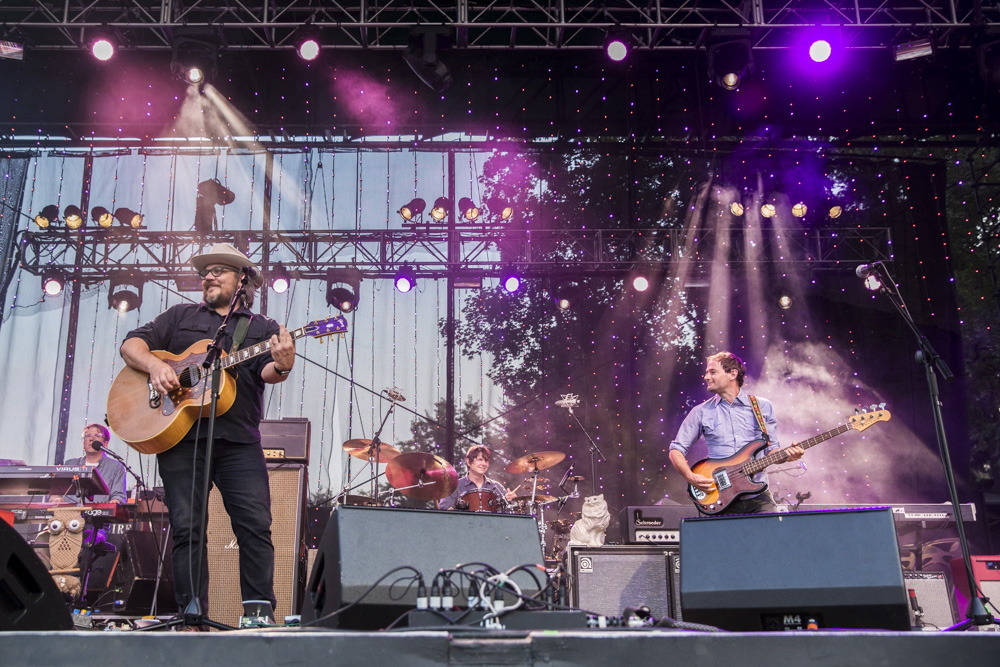 Wilco is often unfairly pegged as something called “dad rock.” What does that mean, anyway? Safe? Bland? Black dress socks with sandals and a scolding tone? This reviewer can’t imagine music with so many weird guitar squiggles and cacophonous musical freak-outs being labelled as safe or bland. And those squiggles and freak-outs are glorious things, as integral to Wilco’s sound as the alt-country roots that still provide a foundation for so many of their songs.

Celebrating their 20th anniversary (and also the free release of their new album Star Wars – Jeff Tweedy swears he had no idea a new Star Wars movie was coming out), the Chicago band showed the sold-out Marymoor crowd two decades of variety.

It’s rare for any band, much less a long-running band, to play their new album in its entirety, but that’s what Wilco did, kicking off the show with a front-to-back run through (granted, it was only about 30 minutes of material in a two-hour-plus show).

The new material was well-received, but once the back catalog was brought out, the vibe escalated a few more notches, as more fans crowded between the front row seats and the stage of the reserved section (far be it from this reviewer to have such an un-rock-and-roll vibe, but this reviewer was peeved to lose her front row status. But it turned out all right in the end – this short reviewer could still see well enough).

Lanky guitarist Nels Cline was often the star of the night, his wonderfully weird sounds enhancing crowd favorites like “Impossible Germany” and “The Art of Almost.” Yet for all his maniacal solos, he fit right into the groove when the whole band joined together to create a clamorous wall of sound.

Jazz guitar great Bill Frisell was a welcome surprise guest, joining the band for “Forget the Flowers” and “California Stars,” which also featured guest tambourine and vocals from Jenny Lewis and Ben Gibbard. Lewis and her band opened the show with a tight, fun, woefully too-short set.

When the crowd thought the band was nearing the end, they kept going for a 32-song set, ending with an acoustic encore that featured Pat Sansone on banjo and Cline on dobro. After such an enthusiastic performance, it’s not hard to imagine the band happily staying for another 10 classic Wilco songs if they could have.

Alicia is a Midwest transplant who loves Seattle but misses thunderstorms. Her musical obsessions began when her coolest aunt gave her a copy of K-Tel’s Rock 80 album for Christmas when she was 7. She spent many years studying piano and voice, but the force of rock and roll won, so while she still sings in a local chorale, her true musical passions lie more with The Beatles than with Beethoven. When she’s not working at her job in HR, she can be found singing bad pop songs at the top of her lungs … although sometimes she does that
Related ItemsAbby Williamsonbill frisellFeaturejeff tweedyJenny Lewisnels clineSunita Martiniwilco
← Previous Story La Luz Fans Crowd Surf At CD Release Show
Next Story → The Hot Seat with Comedian Kelsey Cook