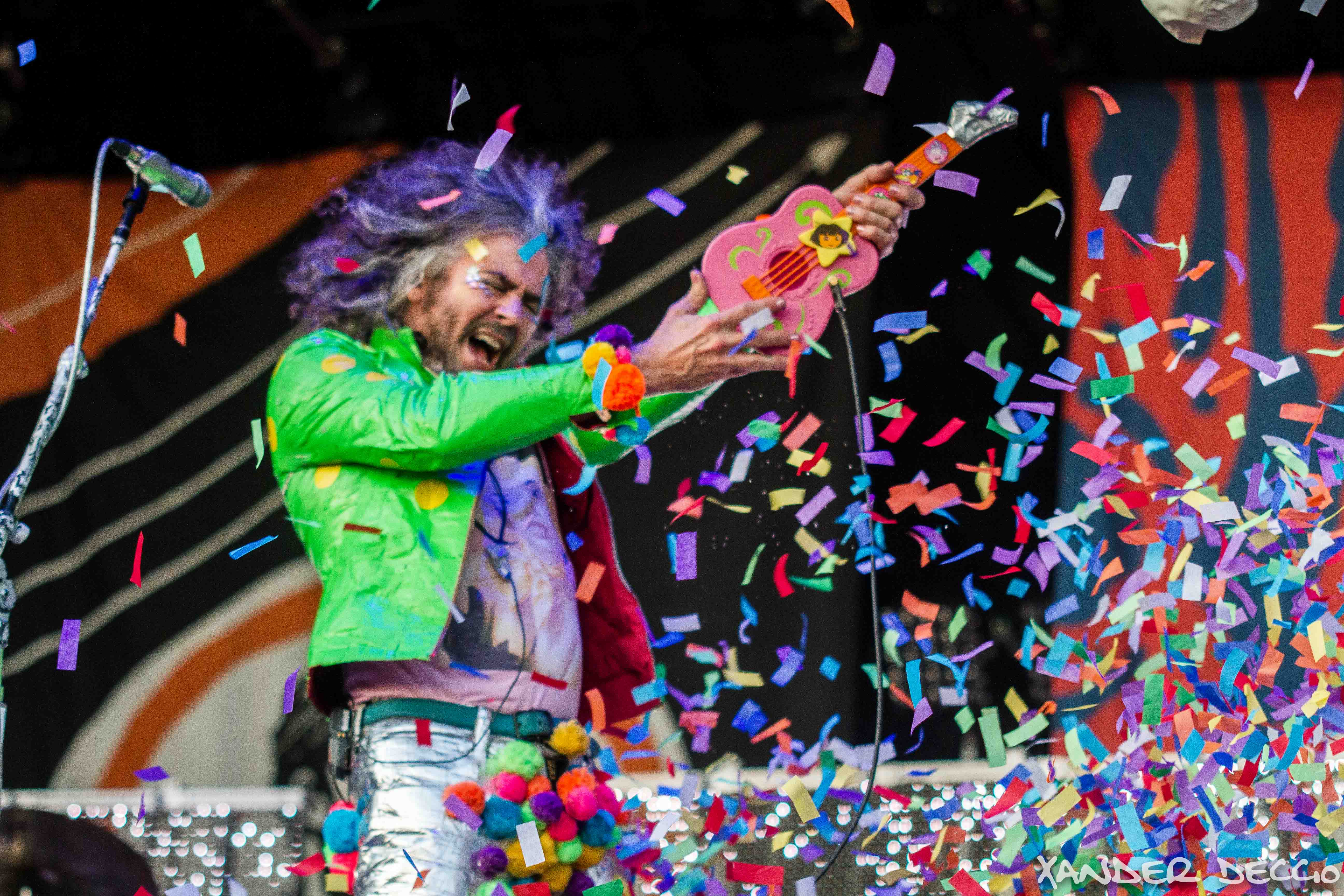 The Flaming Lips frontman Wayne Coyne gets confetti crazy during the Gentleman of the Road stopover in Walla Walla, WA. Photo by Xander Deccio

With an estimated 22,000 visitors to the Eastern Washington town nearly doubling its population last weekend, Walla Walla welcomed the Gentlemen of the Road Tour (GOTR) with open arms. It was clear that the citizens of the quaint college town unified to organize and cleanly execute an amazing weekend that brought in an estimated $9 million in economic impact to the business community.

The ubiquitous GOTR logo was on nearly every downtown business, sidewalk, free shuttle, merch, and even restaurant menus that were created just for the weekend. The eclectic, and well-behaved crowd added to the charm of the experience, with young and old and every age in between enjoying the top-notch main stage performances by The Flaming Lips, Jenny Lewis, Dawes, The Vaccines, James Vincent McMorrow, Jack Garratt, Tune-Yards, Blake Mills, Jeff the Brotherhood, and many more. Headliners Foo Fighters and Mumford & Sons anchored the evening performances Friday and Saturday, respectively.

The mellow, yet enthusiastic crowds warmly received each act at the Whitman College Athletic Fields. Keyboardist Ben Lovett of Mumford & Sons told the crowd that Walla Walla could be the “best Stopover” they’ve had. Their Gentleman of the Road is a live promotions company, record label and organizer of Stopover Festivals. They select venues not normally toured by performers.

“We deliberately look for towns that have something unique, or some vibe of which they are proud, explore them and enjoy what they have to offer, and then try to bring a party without leaving too much of a trail of destruction in our wake,” the band states on their website.

Some of the highlights:

Foo Fighters Dave Grohl, in spite of sporting crutches for a broken leg (from an accident during a show in Sweden), rocked the stage for three hours with his bandmates, opening the show with their hit, “Everlong” to a packed crowd. They performed fan favorites like “Learning to Fly,” and “Hero,” as well as covers of Queen’s “Under Pressure and Tom Petty’s “Breakdown.” They also dedicated a version of “Big Me” to GOTR creators, Mumford & Sons.

The Flaming Lips, who took the stage before Mumford & Sons on Saturday, nearly upstaged everyone with their showmanship and use of props. Front man Wayne Coyne took the stage with a large, unidentifiable creation made up of dozens of round silver mylar balloons, accompanied by dancing mushrooms, a rainbow, the sun and a large caterpillar. He sent the “mylar creature” out into the audience, who “surfed” it to pieces, creating ample opportunity to bounce the multiple balloons around.

During the set, which included “Yoshimi Battles the Pink Robots” and “She Don’t Use Jelly,” confetti cannons covered the first few rows of fans and Coyne surfed the crowd inside a giant see-through bubble. With their musicianship and flamboyant stage presence, the Flaming Lips energized the crowd for the final headlining act — Mumford & Sons.

While all of the performances were good during the festival, when Mumford and Sons took the stage, the British rockers’ musicianship was unequaled. The full-bodied and passionate vocals by Marcus Mumford meshed with the backing vocals of bandmates Lovett, Winston Marshall and Ted Dwane. The rich, bold sounds of “I Will Wait,” “The Cave’” and “Broad Shouldered Beasts” showcased their considerable talent as a cohesive unit.

Mumford may have selected Walla Walla for the festival because he had fond memories of listening to the song, “Walla Walla” by the Offspring, which they covered during their set, much to the delight of the crowd.

The GOTR Festival’s next stop is Salida, Colorado, where they are expecting 35,000 fans to attend.

Don’t miss out on camping

Hear as many bands as you can

Take the party from the stage to the town

Have as much fun as humanly possible

Janice is the managing editor for SMI. She has 30 + years experience in the field, and is an audiophile as well. She holds a BA in journalism from Central Washington University and a Master’s from the University of Washington. She currently works as a communications and event planner. She has performed as a coloratura soprano with the Yakima Light Opera Company and the Warehouse Theatre Company. She has fronted several classic rock cover bands for fun, and enjoys all genres of music.
Related Items2015Dave GrohlFeatureFlaming LipsFoo FightersGentlemen of the RoadGOTRGOTR Stopover Walla WallaJanice DeccioJenny LewisLiveLive MusicMumford & SonsMusicPhotojournalismPhotosSeattle Music InsiderSMITheVaccinesWalla WallaWayne CoyneXander Deccio
← Previous Story The Hot Seat: Savanna Räy Dohner
Next Story → Looking back at 107.7 The End Summer Camp 2015