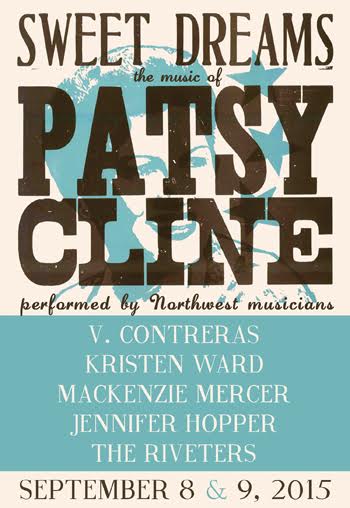 On September 8, we will celebrate what would have been the 83rd birthday of Patsy Cline. The legendary singer, one of Rolling Stone’s 100 greatest of all time, tragically passed away in a plane crash at the age of 30, but she left behind a legacy that still influences singers to this day, with hits like “Walkin’ After Midnight,” “I Fall to Pieces,” “She’s Got You,” “Crazy,” and of course “Sweet Dreams.”

Started in 2008, Sweet Dreams, The Music of Patsy Cline returns to The Triple Door on September 8 and 9 for a two-night star-studded spectacular, featuring all Northwest musicians celebrating the music and life of the late, great Cline. Both nights will feature V. Contreras, Kristen Ward, Mackenzie Mercer of The Young Evils, Jennifer Hopper, and The Riveters who will be performing Cline’s legendary songs, along with musicians Rebecca Young, William Stover, Aaron O’Neil, Jason Goessl, and Country Dave Harmonson.

Our friends at Seattle Theatre Group are generously donating TWO pairs of tickets to give away to our readers for either night of this event. To enter to win, just comment below with your favorite Cline song and which night you would like to attend (9/8 or 9/9).  The deadline to enter is Sunday, August 30 and two winners will be randomly drawn on Monday, August 31.

Jason Tang is a well respected concert photographer in Northwest. Not only does he shoot all of the top Northwest shows and festivals such as Bumbershoot, Capitol Hill Block Party and City Arts Fest, but he also lends his talents to our partners Melodic Caring Project and Seattle Living Room Shows. Jason’s great eye and solid technical acumen make him one of the best and most respected photographers in the region. Because of his stunning photo work and professional reputation, Jason has been requested by name to shoot artists such as Allen Stone and Star Anna. Jason is well thought of within the concert photographer community and is always willing to lend a hand and provide tips to newer concert photographers.
Related ItemsDebra HeeschFeatureJennifer HopperKristen WardMackenzie MercerPatsy ClineSTG PresentsSweet DreamsThe RivetersThe Triple DoorV Contreras
← Previous Story Seattle Acoustic Festival Unplugs for 2nd Year
Next Story → New Music Preview: La Luz – ‘Weirdo Shrine’