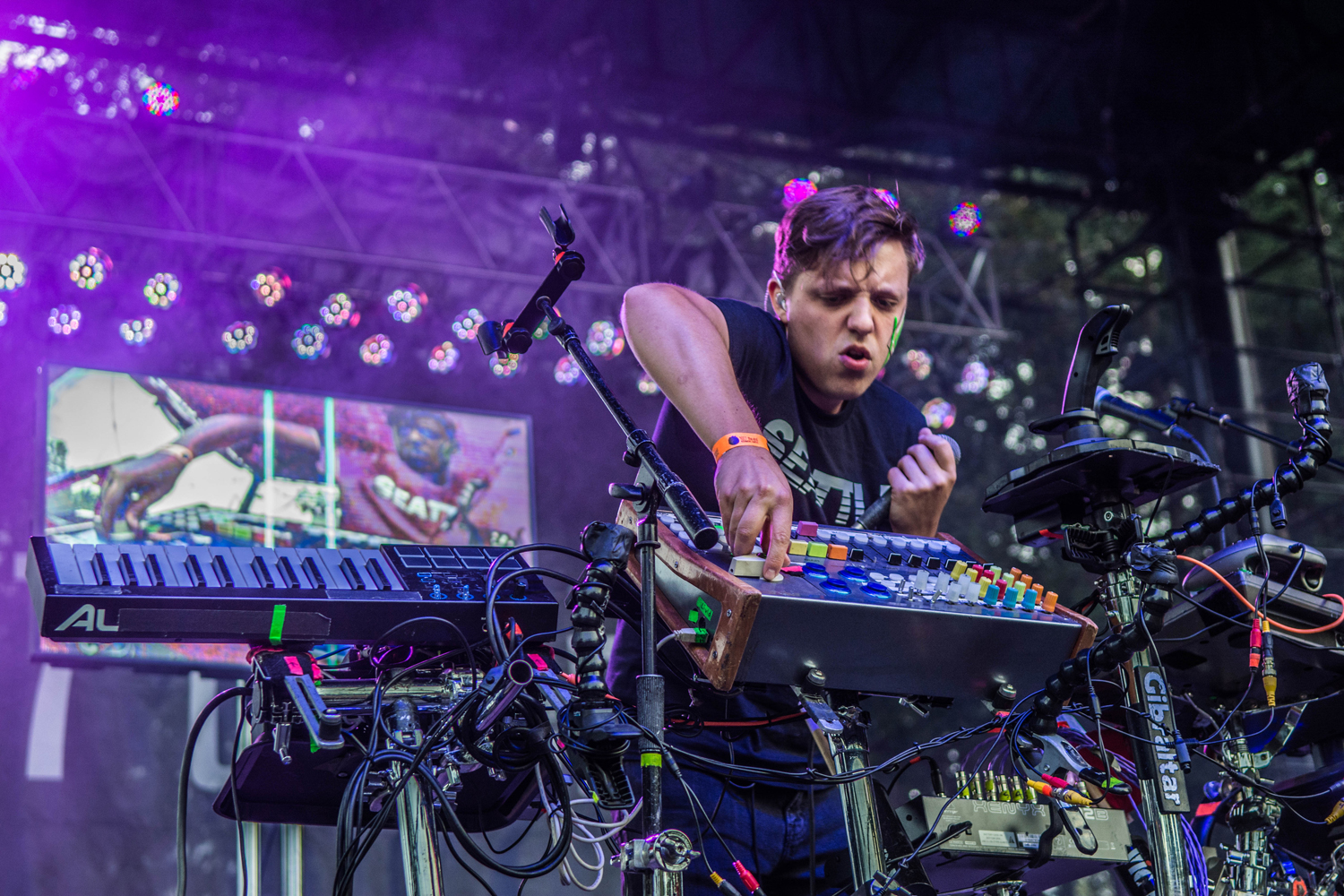 On one dreary Seattle day people gathered at Marymoor Park, armed with blankets and beer – since the threat of rain will never keep music lovers away from the annual 107.7 The End Summer Camp. The parking lots were packed and the lawn was full of spread out blankets and lawn chairs. The End’s Summer Camp is a different style of festival than most, almost insouciant in nature. It’s picnic style has a mellow park atmosphere; this one day festival had a much more family-friendly feel than most, focusing more on music than shenanigans. However, that did not prevent the performers from raising the energy level and getting the crowd to dance in the drizzle.

The wide range of artists spanned genres and geographies but mostly remained contemporary in nature. This festival had it all – from Seattle home-town heroes like Ivan & Alyosha to New York showmen (and women), extending to the UK for science-inspired indie rock, and even hitting Australia for a crooner with a penchant to cover mid 90’s hip hop. The show was rapid staccato in pace as hurriedly finished sets were crammed with as much music as the artists could possibly fit into their ~30 minutes blocks.

Meg Myers electrified with her dance moves and threw down the heavy beats “Curbstomp” and “Desire,” much to the crowd’s pleasure.

Joywave then brought the party.Daniel Armbruster was explosive careening around the stage in every direction. They celebrated the success of their recent release “How Do You Feel Now?” opening with “Destruction” and eventually heading to the single that launched their careers, “Tongues.”

Saint Motel hit the stage after Joywave and delighted the crowd playing songs off their recently released and critically well received EP My Type.

Nick Murphy took the stage next, better known as Chet Faker. His stage name came from the fact that there was already a Nick Murphy established in music, and people arriving to his shows were confused as to who was actually playing. He went with a play on the name of a musician he held in incredibly high regard, legendary Jazz musician Chesney Henry “Chet” Baker, Jr. Thus, Chet Faker was born. His cover of “No Diggity” required no introduction, which was a good thing, since the crowd just roared with excitement at the opening riff and there wasn’t much time to give it one.

Dave Bayley, the front man of Glass Animals commands attention as he takes the stage. He appears to be a much more seasoned performer than he actually is, with Glass Animals only being a few years old. Bayley moves in ways that are fascinating and equally fun to photograph, and it was not long before he was in the crowd interacting with his adoring fans.

Robert DeLong was amazing. For those enjoying the Seattle native for the first time, this was a big treat. Summer Camp marked his 6-year anniversary with his girlfriend. She was off painting faces in the crowd with vibrant geometric patterns, which is one of the things that makes DeLong’s shows so unique. He even made the romantic gesture of looping himself announcing the “6 years” that he then poetically mixed into song.

Matt and Kim delivered. With confetti and balloons, it was a childhood circus dream come true. The crowd was pumped and joined in a sing-along of “Daylight” – “cause in the daylight anywhere feels like home!” In the end, after a “false” finale, Matt and Kim closed out with Kim’s infamous crowd walk, leaving everyone energetic and feeling the bittersweet end to another Summer Camp.

​Stumbling into writing purely by accident, this Seattle native has always had a deep love for music. Frequenting Seattle’s local venues and festivals since she was a teen (back when El Corazon was Graceland!). When she met a concert photographer who despises writing, they teamed up. And so it began. As a scientist by day, technical writing comes more naturally. The branch into creative writing has been somewhat of a challenge that’s been gladly accepted. Finally becoming a little part of something that she’s been a huge fan of for so long.
Related Items107.7 The End107.7 The End Summer CampChet FakerDavid EndicottFeatureGlass AnimalsJoywaveMatt KimMeg MeyersRenae KoepkeRobert DeLongSaint Motel
← Previous Story Gentlemen of The Road Invade Walla Walla
Next Story → New Politics and Cage the Elephant bring down the house at Woodchuck Ciderstock 2015