By Kriston McConnell on August 23, 2015@Kristonisms 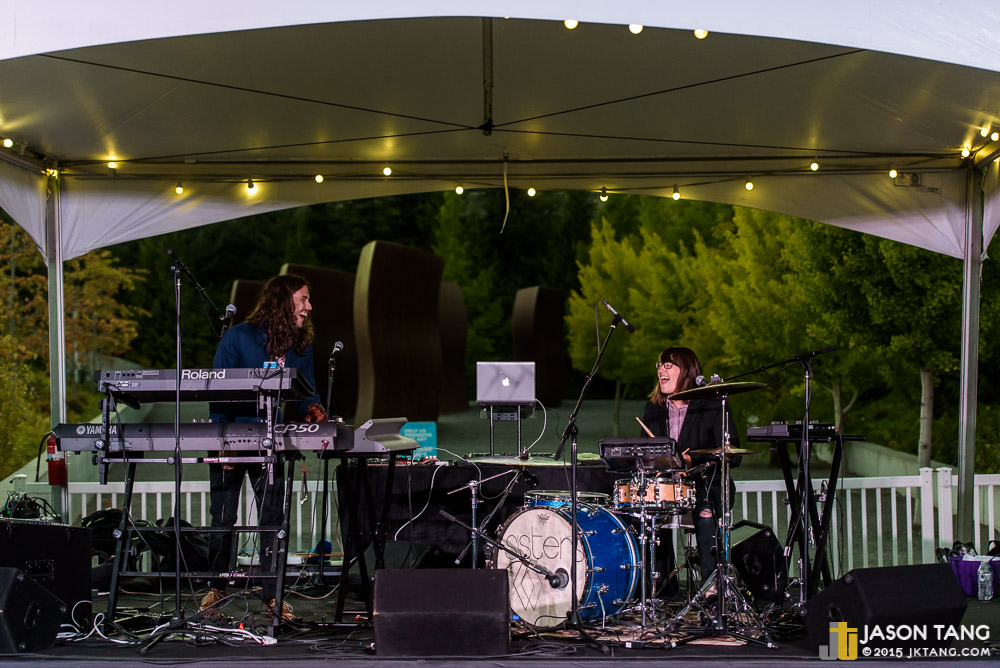 The first to hit the stage was the indie pop duo known as SISTERS. This was the first time the group partnered with Secret Shows, and they did a great job kicking off the evening. There might only be two members in this group, but that doesn’t diminish their sound. These two take on multiple roles – offering up a full sound which could easily rival that of a four piece outfit. Their sound is playful, full of energy and incredibly catchy. As they perform on stage it’s obvious they are having a great time. They’re laughing, smiling and engaging with the crowd to encourage them to get in on the fun. The audience ate it up, and it seemed like their set ended far too early.

In between the two Secret Show acts, the local performing artist Queen Shmooquan filled the time with an outlandish performance which included wigs, a giant vagina and dinner rolls. She is a unique performer who was able to make audience members laugh hysterically and cringe at the same time. Most of her set is silent, even though she had a brief spoken word segment which made everyone laugh out loud. After what seemed like a short time, her set was over and she silently dipped out.

The next, and final Secret Show performing act was the vocal DJ trio The Flavr Blue. On this particular night they were down one member, but that didn’t stop them from getting their dance on. The frontwoman, named Hollis, took center stage and sang her heart out as the DJ blasted some bass-laden jams. Hollis has a sweet, powerful voice that blends beautifully with the electronic beats. She danced on the stage like no one was watching and on a few occasions excitedly encouraged audience members to get their dance on too. A few times during their set, they recruited the assistance of dj100proof – another local DJ. By the end of their set some brave souls made their way to the floor in front of the stage and started dancing. This was the band’s first time teaming up with Secret Shows, but it wasn’t their first time performing at a SAM Remix. After their energetic set, it will likely not be their last time.

There are a couple Seattle Secret Shows happening this week with just a few tickets remaining – Thursday (American Music Session with The Moondoggies) and Friday (David Bazan). For more info, visit their website. Signing up for their mailing list will give fans the opportunity to be the first to learn about future Secret Shows. To sign up, just send an email to seattlesecretshows@gmail.com.

Kriston began her writing career as a passionate music fan. She attended dozens of shows, purchased CDs, vinyl and even cassette tapes of artists she barely even heard of. Shortly after joining a band's street team she happened to meet blogger Jacob Tender (now with Alternative Press) who asked her to write for his blog. After a couple of months he joined the staff of Under The Gun Review, and brought her along for the ride. After spending four years as a major contributor to the publication she moved on to be a web content contributor for New Noise Magazine, whose print magazines have a national reach.
Related ItemsFeatureKriston McConnellSAM RemixSeattle Secret ShowsSISTERSThe Flavr Blue
← Previous Story This Sunday: The Hoot Hoots On a Boat!
Next Story → The Hot Seat with music writer Dave O’Leary