By Christine Mitchell on August 24, 2015@Housetornado37 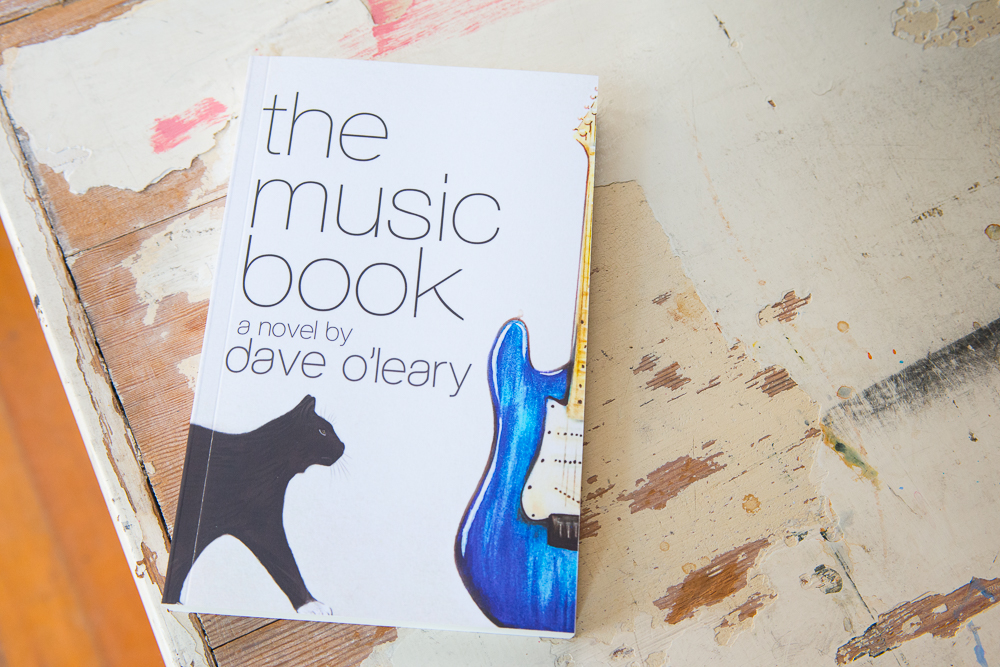 Dave O’Leary, currently promoting his novel The Music Book (Booktrope), sat down in The Hot Seat this week and spoke of his passion and love for the Seattle music scene.  Whether seeing a local band at the Skylark in West Seattle, The Tractor Tavern in Ballard, maybe the High Dive in Fremont, O’Leary has immersed himself in the roots of the local music.   As an amplifier of the opinion that KEXP is mostly the only station in Seattle playing the local groups while other stations mostly ignore them, Dave has created a journey through The Music Book that grabs your attention with an inside view of what many people are missing.  While based in fictional territory, the novel utilizes actual Seattle bands, and The Music Book is a ride worth taking.  This week Dave will give the first donation of proceeds from The Music Book CD to the Wishlist Foundation in Seattle.

Below is a excerpt Dave’s interview:

1) What led you to write this book?

When I was finishing my first book, I was contacted by a music blog called Seattle Subsonic since I knew a woman who wrote for them sometimes. She liked the quality of the writing on my personal blog and noticed that I frequently wrote about music or music related things so she asked if I would write for Seattle Subsonic. I was hesitant at first because I couldn’t imagine being critic so what I did was insert myself into the music writing. It wasn’t just about the music. It was about my experience of the music, and I found that doing it that way allowed me to delve much deeper into chords and melodies and lyrics and convey to the reader what I was experiencing while scribbling notes and drinking a beer at the end of the bar. What I also found was that the bands quite enjoyed what I was writing. They enjoyed the perspective. The readers did too. Eventually, Stacey Meyer, singer for a band called Furniture Girls, told me one night she’d love to see a collection of those writings in a book. That was the genesis of it. Until then, it hadn’t occurred to me.

2) The Choice of using a fictional story but using actual local artists is unique, can you explain what led to that?

After Stacey suggested the idea, I thought about it for a long time. If I was going to do it, I knew the book couldn’t just be a collection of reviews about local bands in Seattle so I took the themes that had shown themselves in the music articles and built a fictional narrative around those. The book is thus a blend of fiction and non-fiction. The bands and music are real. The story wrapped around it is fiction.

3) The local scene is often under represented. What can be done to help recognize and help artists out?

It would be great if radio stations other than KEXP would play local stuff. My publicist at Booktrope contacted one major local radio station to see if they’d have me on to talk about the book and the bands and thereby promote the local music scene, but they replied to her that they couldn’t do it. No reason. They just couldn’t do it. They suggested doing the Sunday night local hour, but who’s listening to the radio then? There’s just so little support in radio for local stuff, and that sucks because every band was once a small local group getting started and playing Tuesdays for crowds of ten people or less. Every band in The Music Book should be spinning right now on every major and minor station in Seattle and beyond. So what can be done? I guess we just all need to get out more and see local bands and write about them and take pictures and buy their CDs. People need to support their local music scene. There’s so much great stuff out there.

4) Are there artists from Seattle that are relatively unknown but you feel are a must see?

All of them in the book. That’s another reason I decided to write it after Stacey suggested it. All the bands in the book deserve to be every bit as famous and successful as bands like Pearl Jam. My two favorites in Seattle are Sightseer and Furniture Girls. Julia Massey is great. A new band that I like very much is Into the Cold. I played with a few of them in a band a few years ago, and they know my writing so when they were putting together their CD they asked me to write something for the liner notes. They were thinking that maybe they’d give me one panel of the CD insert, but what I wrote took up three panels. Anyway, they’re great, and they’re playing a CD release show at Easy Street in West Seattle on August 28.

5) What is the best local place to see music?

I tend to like the smaller clubs. I used to go to the Skylark a lot. I don’t live in West Seattle anymore though so these days I most often go to the High Dive or the Tractor. There’s also a cool new place in Fremont called Substation. The Tractor would be my favorite of those three.

6) What do you think is the defining moment for a band to break through?

That’s a tough one. I suppose it’d be different for every band, and it would also depend on how we define “break through.” So few bands break through in any significant way in terms of fame or monetary success, but maybe that’s missing the point. We play music because we love to. I’ve had successes in bands that might be considered minor to others, but not to me. I once played a guitar solo that got a standing ovation at the end of show. People stood and cheered, and I thought in the moment, “Wow, we’ve got something here.” And we did. That band eventually broke up before it ever did much more than that, but it was a success, a minor kind of break through. People went home happy that night. They went home remembering the music. For that band, that was our defining moment, our short-live break through. I’m sure every band in The Music Book has had many of those moments. Hell, I’ve probably witnessed some of them. I saw Like Lightning play “Disappear” at the Skylark, and it was absolutely beautiful. It makes me wonder in this moment if they remember that show.

7) The book has been described as making reader feel as if they are deep within the music scene.  How did you create this?

The simple answer is that I got deep into the music scene. I was going out all the time. I got to know the venues and the bands. A lot of people back then thought Seattle Subsonic was my site because if you went to the site, the whole front page was nothing but my articles. I got into it and was able to capture my experiences in writing. And that was the idea. I didn’t just want to write about what kind of music bands were playing, I wanted to capture the experience.

8) How has the local music scene changed over time here in Seattle?

For a while it seemed like that alt-country indie thing was going to take off. The Head and the Heart seemed like good evidence of that at one point, but it seems their moment has passed, and their second record fell flat with me anyway. There’s a lot of cool stuff happening now (Into the Cold, Ever So Android), but I haven’t seen a specific trend one way or another for any kind of sound in particular. I only moved out here in 2007 so I don’t have experience with the scene prior to that other then the brief three week period I lived in Seattle in 1998.

9) To a band just starting out what would you tell them?

Go out and see bands. Become a part of the scene. If you’re going to record, do it right. Don’t release a crappy sounding demo. The songs might be great and maybe the live show too, but if the recording quality is shit, who’s going to care? When I first started playing in bands, I’d give people tapes that were awful recordings of practices or live shows. I could hear the songs in my head, and I knew how good they sounded in the moment, but other people could not of course hear what was in my head.

Oh, and this. Avoid PBR.

10) Besides the book, The Music Book CD is a benefit for the Wishlist Foundation. Why is this foundation so meaningful to you?

I chose the Wishlist Foundation because it’s a Pearl Jam fan nonprofit, grassroots 501(c)(3) fan organization dedicated to supporting Pearl Jam’s charitable and philanthropic efforts. And Pearl Jam does a lot of charity work. I mentioned PJ a few times in the book because I love their music but also because they are a local band. The Wishlist Foundation made sense because of that connection to a Seattle band. I first became aware of the Wishlist Foundation a few years ago when I wrote about Mike McCready’s Flight to Mars show. They help organize donations for that, and they raise a lot of money each year with that and with events prior to Pearl Jam shows all over the country. I wanted to support that effort. I’m going to be on King 5’s New Day Northwest on September 1st to make the first donation. Booktrope is going to make a donation also so I think we’ll be able to give them about $1000 this week. Also, in addition to money from CD sales and downloads, 100% sales of the book though the end of September will be donated to the Wishlist Foundation as well so now is the perfect time to pick up a copy online or at Seattle area Barnes & Noble stores.

Christine Mitchell has been poring over album liner notes pretty much since she acquired the skill of reading, and figured out the basic structure of rock songs at an early age. Whether it’s the needle popping into the first groove of the record, the beeps that signal the beginning (or end) of a cassette tape, or digital numbers ticking off the seconds from zero, music brings Christine happiness, ponderous thought, opportunities for almost scientific study, and sometimes a few tears. When she started attending live shows two decades ago, a whole new piece of the puzzle clicked in and she has been hooked ever since.
Related ItemsDave O'LearyFeatureFurniture GirlsKEXPMatthew LambMike McCreadyPearl JamSkylarkThe High Divethe hot seatThe Music BookThe TractorWishlist Foundation
← Previous Story Seattle Secret Shows Delivers Local Favorites At SAM Remix
Next Story → Bang-A-Rang . . . Lions Ambition roars at Neptune